“Cry havoc and let loose the dogs of war!” No, that’s not from 300, but still I love that quote and since it’s my birthday party day, I’m a tad bit tipsy. I blame Erica for making these kick ass Mango Mojito’s that I simply had to taste test…

I’m digressing… (I need more to drink) Speaking of the Lovely Erica she just sent me this wonderful recap of her encounter with P.S. I Love You star Mr. Gerard Butler. Yes, I just said, P.S. I Love You Star… It made me giggle… Gerard Butler was also in Phantom of the Opera, Bounty Hunter, Timeline, Nim’s Island, Gamer, Dracula 2000, and The Ugly Truth… Cinematic genius! LOL… I actually really like Gerard Butler, and have met him a couple times… He was always pretty awesome, and I’m sure Erica will have the same luck!

Check out her full recap from the Windy City of Chi-Town after the jump!

Ah, this is going to be a quick write-up since this was a no-muss-no-fuss sort of day! (I
think we could all use more of those!)

While many celebs come to Chicago to do publicity for their projects, I don’t get a lot of
notice on where they will be. However, I did get a tip on Gerard Butler’s visit to promote
his new film, Machine Gun Preacher so I set out with my 300 poster to see what may
happen.

I know I’m in the right place when I see a pack of Gerry’s Girls waiting around. Gerard
Butler has a very passionate fan base called Gerry’s Girls. I saw them in action at
Comic Con and let’s just say that they had security a little worried that they might storm
the WB booth when he did a signing for 300. Gerry’s Girls were all over the place when
Rocknrolla was at Comic Con and, I must say, he was great to his fans as he waved
them by security to come up and say hi to him.

Today there are four Gerry’s Girls waiting for Gerard. They saw him the day before at a
screening, will see him today for his press and then will travel to Indiana where he is
doing a charity appearance tonight. Gotta love their dedication!

Anyway, there are a few professionals and a few other fans, but it’s not too crazy.
Hopefully he’ll be cool today.

Sure enough, a couple of cars pull up and Gerard and his entourage get out. Tall and
lanky, his people are trying to rush him inside, but he takes a moment for us and I’m so
glad we formed an impromptu line and are not rushing him like a mob. 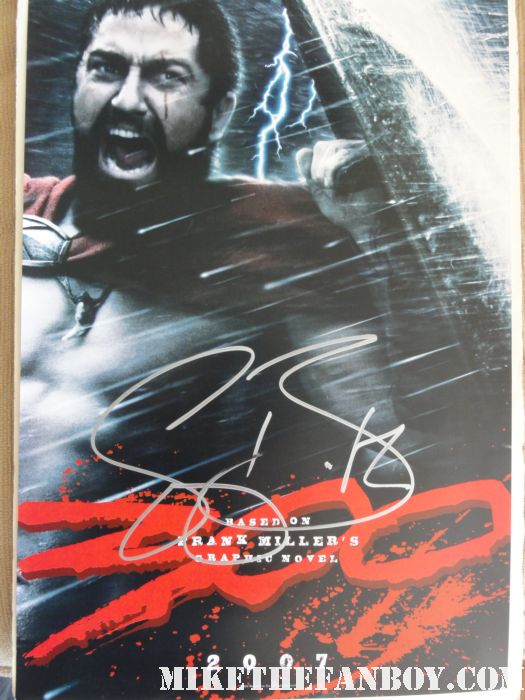 He signs my poster with a smile and does a few more when more when papers start to
fly around. He is a little weary since he’s seen the professionals around and asked “ok,
who haven’t I signed for before?” and a few fans respectfully back off, but the
professions act like they didn’t accost him at the screening the night before and Gerard
signs for them.

He isn’t saying much which is a shame since I love that Scots burr, but he does stop to
do a few pictures and then heads in to do press. 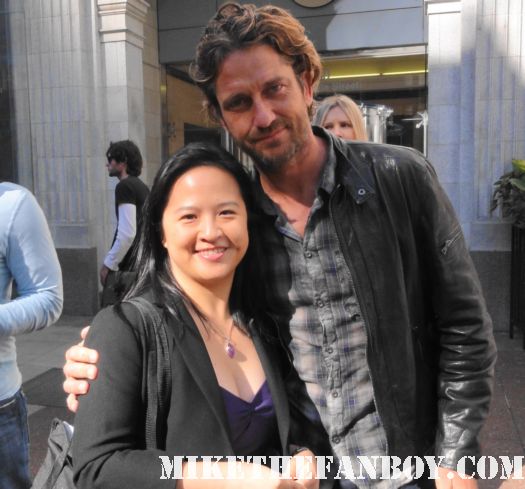 Yes! I continue my hot streak of gladiators (or men with swords) after meeting Jason
Momoa (Game of Thrones and Conan), Henry Cavill and Luke Evans (upcoming
Immortals) and Manu Bennett and Liam McIntyre (Spartacus). Not a bad summer…