Home / Fanboying! • Film Festivals • Stars of the 1980's and 1990's / The Mill Valley Film Festival! Russ Meets Bryan Cranston And Dustin Hoffman! Gets Dissed By Stevie Nicks And Ben Affleck Is A No Show! Doh! Autographs And More!

The guest list was pretty good considering it’s a smaller festival and Russ headed out to check out what he could get. And I have to say, he got a couple good people, and a couple disses! Doh!
Check out the full recap after the jump!

Never ventured to the Mill Valley Film Festival before and I probably didn’t pay attention to it. I never saw a gas worthy person to spend a 40 min drive to get.  This year it changed a bit as I heard that Ben Affleck, Dustin Hoffman and Stevie Nicks were going to be there (of course on separate days).  Ben is a favorite only because he is a Red Sox fan and married to Jennifer Garner (who I really hoped was going to be there).  Dustin Hoffman was a childhood favorite because in high school in my fiction and film class we studied “The Graduate”.  Stevie was not a bucket list celebrity but I have a great memory of her during my 3rd concert ever that I saw in high school.

6:00pm – Arrive at the theatre and studied the set up via google so kinda knew the layout.  I spot the ebayers as well so I know I am in the right place.  There are always these asian twins and the 4 big dudes that I see at all the sporting events and I know they sell them.

6:15pm – Rumor starts to fly that Ben never made the trip.

6:30pm – a black SUV pulls up and its Bryan Cranston as the substitute. 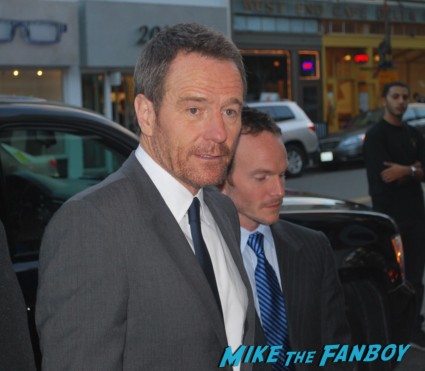 I’ve gotten him at SDCC before so kinda disappointed and I had nothing as well except an index card, so just take a nice picture with him and call it a night. 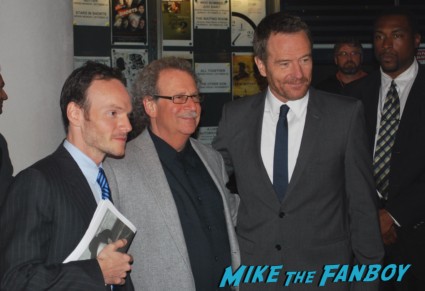 I guess if you’ve never seen Bryan it’s a highlight as he has won a few more awards than Ben…..but Ben is a Red Sox fan.

6:00pm – arrive and see the 8 ebayers out in full force again so I know I’m in the right area. 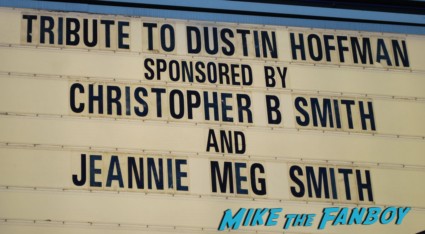 6:15pm – Big security guard I am by is talking to others and telling them the plan to keep the ebayers off and letting him know what is going to happen.  I spoke to one of the ebayers and he said he is one of the worst guys and it is going to be hard.

6:45pm – Black SUV arrives and out comes “Raymond Babbitt” in the flesh. 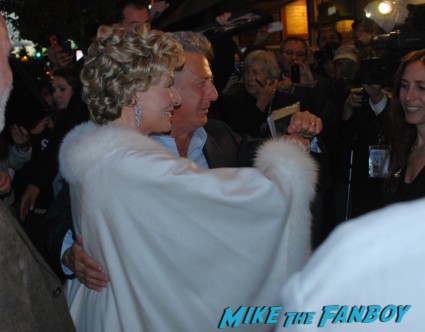 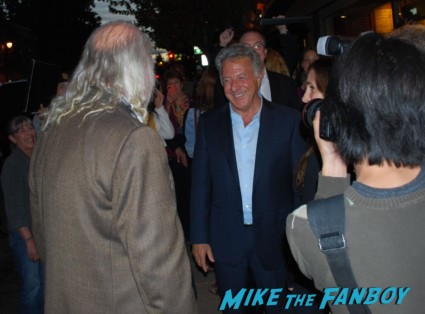 Didn’t realize how short he is but he is shorter than Tom Cruise so I should have figured it out.  Immediately the ebayers jump and follow suit. 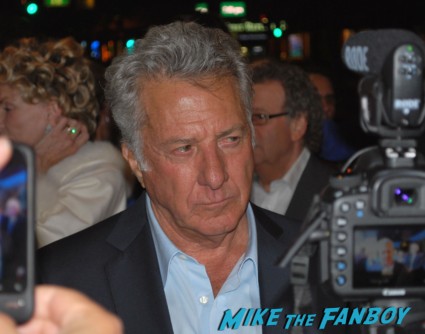 They are waving 11 x 14s behind him as he is interviewed.  After the interview he starts to sign and that is when it kinda gets crazy and the big security guard is trying to hold some of the ebayers at bay that are trying to get multiples. One guy says “I gotta make some money!”  I end up sticking my arm in and yell “Benjamin Braddock please” and he looks up and I feel pressure on the clip board and “Yahtzee”. 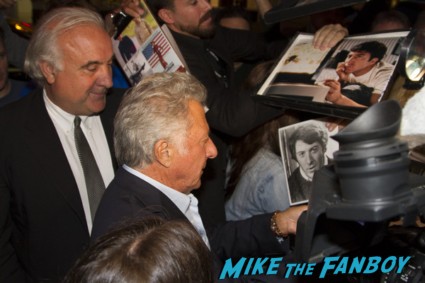 He probably signed about 11 or so and happy to get an icon. 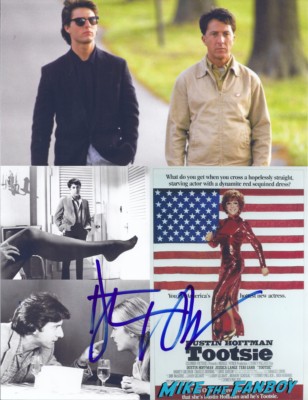 6:00pm – arrive and notice there are no ebayers but just a lot of long lines to get in.  I immediately think its a bad sign and want to make sure I’m in the right place.  I sure am, but a little worried as no ebayers are here.  I know Stevie is hard to get, but it’s such a small venue.

6:20pm – She arrives and really I am in a good position because I’m right where she has to walk to get interviewed. 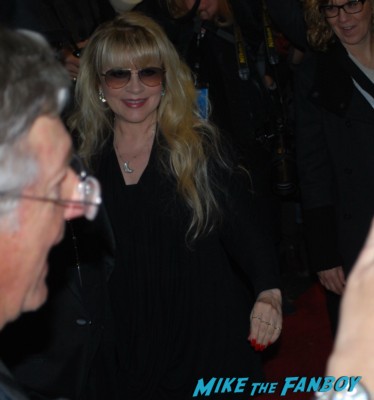 As she walks by I ask her to sign a photo and she replies “I’m sorry, but I can’t”.  Wow, no one else around and she can’t spend 5 sec signing her name and even personalizing it?  In retro, I could have begged and said I drove 40 min and Fleetwood Mac was the first concert I saw….blah blah blah, but was more in shock since no one else there.  Now if Madonna I probably would have begged, but Stevie was more a nice to have than a bucket list.  Oh well Failure!!

Great experience and I got Dustin….that might be wall worthy.