Home / Fanboying! / The Movie Maven Gets To Meet The Cast Of The UK’s Inbetweeners And Hangs With The Boys For A Full Day! Simon Bird! James Buckley! Blake Harrison! Joe Thomas!

Mike They Fanboy’s own Movie Maven got an awesome opportunity to hang with the cast of the UK sensation The Inbetweeners! The boys headed over to our side of the pond to celebrate the release of their first big screen adventure in theatres now!

The stars of the movie Simon Bird, James Buckley, Blake Harrison and Joe Thomas drove a party bus around Hollywood met with fans, went to Pinky’s Hot Dogs and more!

Check out the Movie Maven’s recap after the jump and check out The Inbetweenerss Movie in theatre’s now!!!!

The UK has hit Hollywood and the cast of the Inbetweeners lived up to the partying ways of the characters they portray.  The party bus started in Hollywood picking up press and bloggers like the me, Movie Maven! I was there to take in all the British-ness and hilarity that ensued on a bus with Simon Bird, Joe Thomas, Blake Harrison and James Buckley!  The cast was already drinking and enjoying themselves while promoting the movie The Inbetweeners being released this week in the US.  If you are unfamiliar with the UK television series The Inbetweeners here is what you need to know, it is a show about 4 friends who are not quite nerds but no quite popular either (…get it Inbetweeners), the show follows their misadventures in the pursuit of girls and a good time. In short its basically Superbad with British accents!  If you haven’t seen the television series you can check it the first two seasons on Netflix!

The party bus was full and liqueur was flowing! What a cool concept and what more perfect actors to party with! 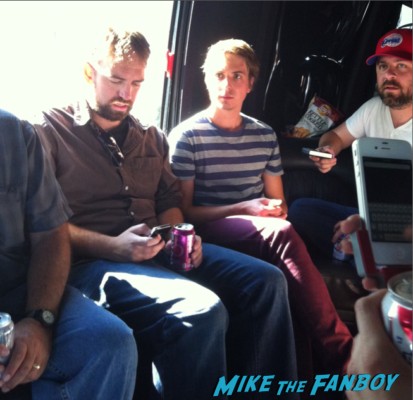 Our first stop was Pink’s Hotdogs where the cast greeted us as well as fans. 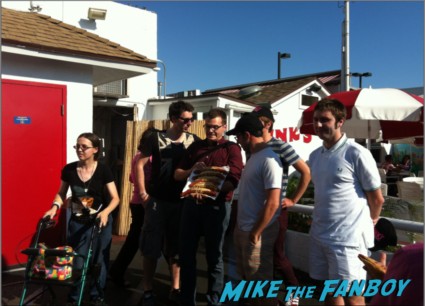 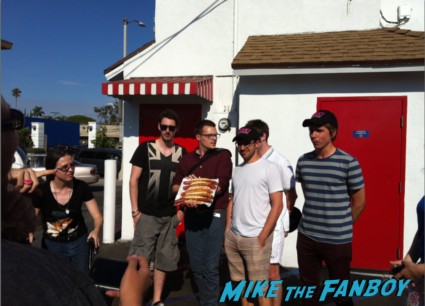 I was able to sit and talk with Blake Harrison who plays Neil, the lovable idiot of the series. 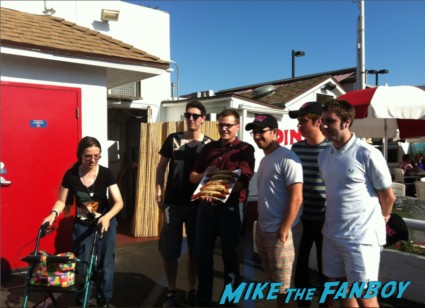 Unlike the character that he plays Blake is smart and easy to talk to.  Blake revealed he has deep passion for Buffy the Vampire Slayer! 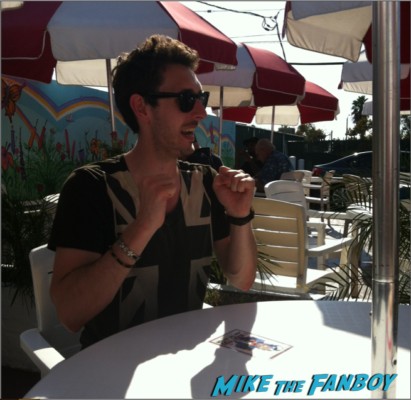 Blake also revealed that much like the characters that they play there is a lot of teasing and joking on set.  Because the cast is so great about really diving into their character I wanted to know if any of the show was improvisation. 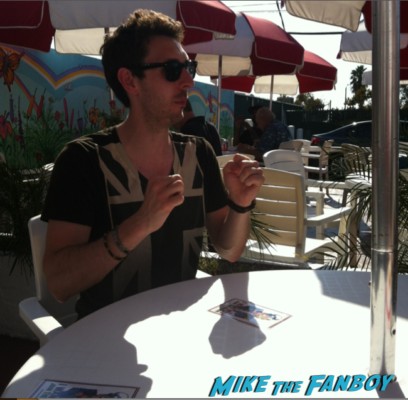 Blake informed me that there is very little improvisation which he attributes that to the writing being so brilliant and hilarious on its own.

After some photo-ops with fans and various Pinkies wiener enthusiasts it was off to Saddle Ranch for some good ol’ American bull riding. 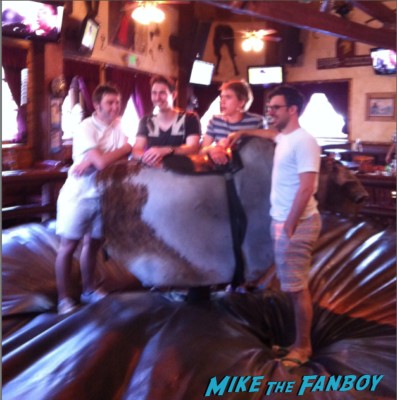 I got a chance to sit down with both Blake and James Buckley at the Saddle Ranch. James discussed what it is like to be recognized on the street. 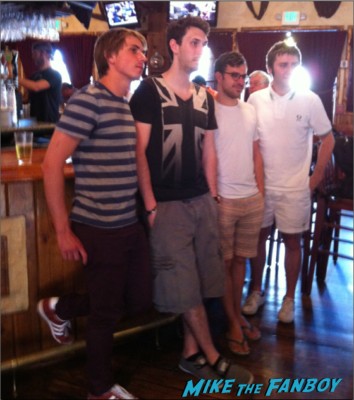 James said that because their characters are so funny and at times down right nasty on the show when fans see them out they tend to yell vulgar things. James said “People find us so approachable… People will happily walk up to us and hug us and shout really obsene things to us”  but James clarifies that it is out of “fondness” and love for the show. 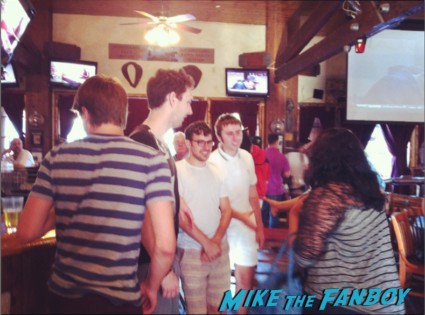 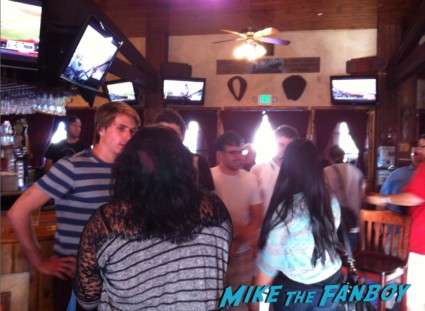 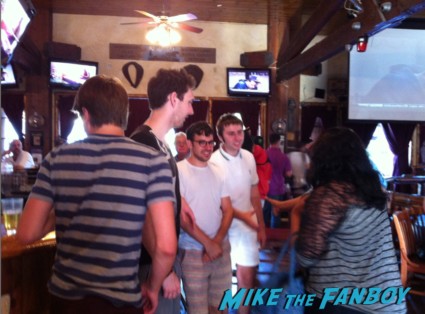 I briefly got to sit down with Simon Bird and Joe Thomas but I did find out that they are working on a new project together, which is definitely something for fans of The Inbetweeners like myself will be looking out for! 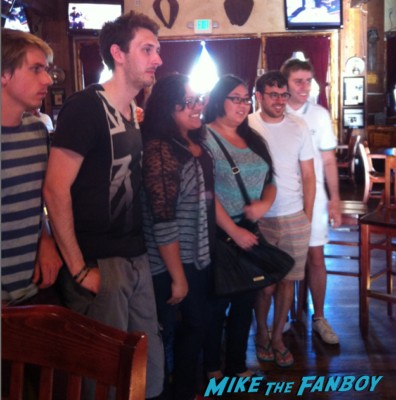 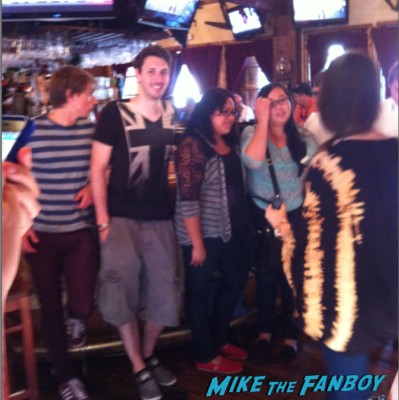 And near the end of our bus adventure Blake answered the big question.  Where does the Inbetweeners go from here; will there be another movie? Blake gave an honest answer “At the moment it seems like a nice place to end it but there is murmuring going on of a second movie…but nothing is set in stone” he further went on to say that “if it does end on this movie it is kind of a lovely way to end it.” 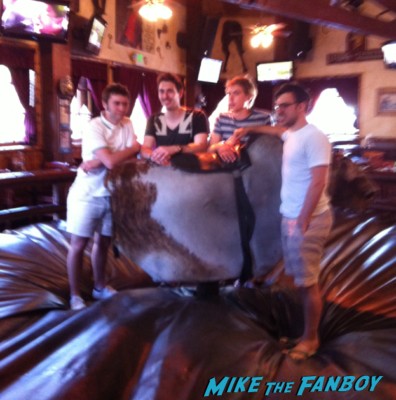 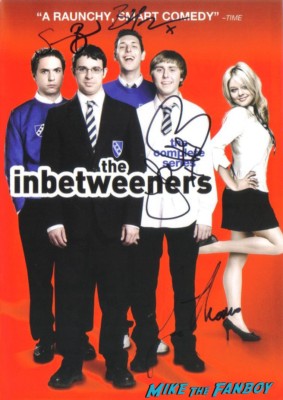