It seems like everyone wants a franchise these days and every studio is taking Marvel’s lead in making a film that branches off into the next big super-sized hit. When they take off, the gamble can yield amazing results, when they don’t… That’s when things get sticky. Universal has a whole slew of unmined properties in their classic monster series like Frankenstein, Dracula, etc… They have dubbed this the “Dark Universe.”

The first film in Universal’s “Dark Universe” is the new Mummy reboot. Starring Tom Cruise in the lead role, the current Mummy last little to do with the original Mummy trilogy. Nick Morton (Tom Cruise) is a US Military Sergeant who sells antiquities on the black market along with his friend, Chris (Jake Johnson). The both find themselves under attack and run for cover with Chris calling for an airstrike, which reveals a giant Egyptian tomb under the surface.

Jenny Halsey (Annabelle Wallis) confronts the two treasure hunters and together they all head down to see what secrets the tomb has to offer. What is houses is an ancient sarcophagus encased in mercury which is supposed to contain evil spirits. The sarcophagus contains the remains of a mummy named Ahmanet (Sofia Boutella) an Egyptian princess who, after being thwarted for the crown made a deal with the God of Death to kill her father, his family and bring him into the world via a human host.

On the other end of the spectrum, while digging a new transportation tunnel, workers uncover a crypt like tomb that has soldiers buried there, along with an ancient Egyptian Ruby. This Egyptian Ruby, when joined with the knife Ahmanet has, will allow her to stab the host of her choosing, in this case Nick, and allow the God of Death to inhabit his body.

Now Nick must fight Ahmanet, his own will since Ahmanet has bewitched him, to save our world from falling under her rule and stop the curse. The tale itself isn’t an original one, if you strip it away, basically an ancient force needs jewel to bring about hell on earth, with only Tom Cruise in the way. It’s a tired and true premise that can work if given the right spin, The Mummy however never really meshes and ends up with a generic feel to it. 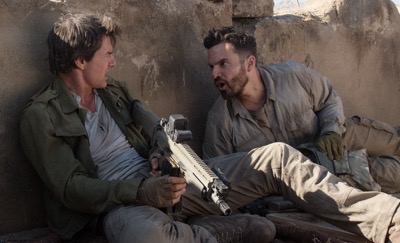 That generic feel extends not just to the plot but to the characters as well. Tom Cruise, who usually picks very good projects to be involved in, here is wasted in the lead role. It could have been anyone, from any age group, who wanted to play somewhat of a cad with goodness buried deep down. That’s not an acting stretch by any means, and sadly his character never gets any deeper. Faring even worse is Annabelle Wallis who has little more to do that scream and offer exposition.

Sofia Boutella, who was amazing in Star Trek: Beyond, here tries to make Ahmanet a fully fleshed out character and somewhat succeeds. It’s almost as if, the script and director said, “No, more generic, make sure it’s blander.” Even the big action set pieces don’t add up to much even though there were moments that looked amazing, but without anything propping them up, they seemed wooden and flat. 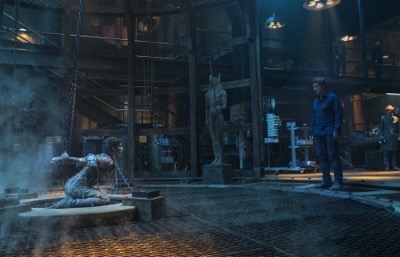 For a franchise dubbed, “The Dark Universe,” there should have been some sense of style and substance. The direction lacks any artistic merit and the pacing is very slow in the beginning and never picks up. The Mummy is hiding a really good movie in there somewhere, a lead character with personality such as Indiana Jones would have made this film soar. As it is though, I can’t see a franchise being built on this premise, let alone this film.

The Mummy arrives on Blu-ray in a fine transfer thanks to Universal Home Video. The film transfer is exceptional, with the larger action set pieces looking rich and textured. It looks astounding, whether the location is the desert of a tomb, the colors pop and the fine details are very pronounced. The pops of color that occur in the film, such as the fire or the red jewel look even better on the small screen. There is zero fallout in the picture in the darker scenes and it allows the action to be seen while still delivering on the cinematographer’s overall style aesthetic.

Deleted Scenes – There is just under five minutes of deleted scenes, four scenes in total.

Cruise and Kurtzman: A Conversation – This is a 20 minute talk between the lead star and the writer.

Rooted in Reality – This is a look at the modern day setting of the film.

Life in Zero-G: Creating the Plane Crash – Tom Cruise talk about what he wanted from the plane crash scene and how they shot it in a real zero-g airplane.

Meet Ahmanet – This is a look at Sofia Boutella and her character in the film.

Cruise in Action – These are some interviews about working with Tom Cruise.

Becoming Jekyll and Hyde – A short look at Russell Crowe’s character in the film.

Choreographed Chaos – This is a look at the locations and shooting.

Nick Morton: In Search of a Soul – This is a look at Tom Cruise’s character.

Ahmanet Reborn Animated Graphic Novel – This is a look at the character’s backstory in animated form.

Overall, The Mummy has a great movie hidden away in it somewhere, sadly the finished project is a generic film without a clear vision. Tom Cruise is sadly wasted along with most of the cast who try to find their characters but fail. It’s not a bad film necessarily, just one you might forget halfway through the end credits. Thankfully, the blu-ray transfer itself is so outstanding, it helps the film as a whole. It’s worth checking out, just know what you’re getting in for.

The Mummy is out now on Blu-ray!