God bless The Novel Strumpet. She’s a tad more lenient than perhaps I… Then again I did read her Elementary review! LOL… The Novel Strumpet made her way down to Comikaze last month, and has done a little write up on the experience.

I sat this one out, as I was told that “Comikaze would only welcome large media outlets” Still burned by that one. Sorry. Anyway, I’m not going to pour my bile all over the net!

Check out The Novel Strumpet’s recap after the jump!

What a difference a year makes. Last year we got there, went into a basement parking lot, tried to fight our way through really crowded in booths and panels were held in “tents” (ok fabric over poles in a square format but still). This year they were on an actual floor in the convention center, there was quite a bit of space between booths and they actually had rooms for panels. Fancy shmancy!

I’ve read Susan aka Suddenly Susan’s take and I get it. I mean let’s face it I attend things for books and while there were comics for sale (I’d tried to look for a copy of Lady Mechanika at their booth but every time I walked over…nothing…how is that possible?) and a panel about books – which I missed due to said line fiasco in Susan’s report – I knew there wouldn’t be much. But I wanted to see how the show had changed, and I like exploring the booths because I might discover something new.

I went with some work colleagues, one of whom went dressed as Captain Jack Harkness, and boy did she pick the perfect year to do that! I spent quite a bit of time in front of the Tardis booth and stopping to watch her get mobbed by Doctor’s everywhere. They were stalking her I swear, probably because she was the only Capt. Jack in a sea of Docs and Companions. Lots of fun, though. 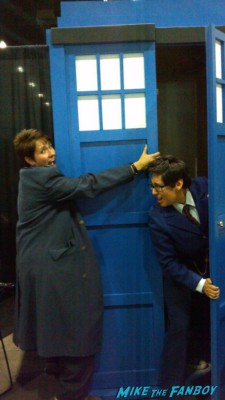 Captain Jack holding on while the Doc looks on… 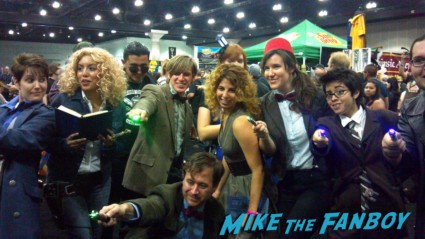 It really became an unintentional Dr. Who convention

There were some really cool booths and I was super excited that one of my favorite artists was there, Sebastien Millon, selling tees and cards. I got him to sign a business card for me…hahaha…his stuff is so awesome. I love cute animals with subversive messages, they make me happy.

I really wanted to see a Quidditch match since they had a pitch advertised, but every time I went over it was just a bunch of people running around with nerf guns. That’s not Quidditch…I want brooms and Snitches! Harumph. Grumble. Pout. I mean they had Whimsic Alley there selling stuff. Whatever.

Really the worst part was the main stage, 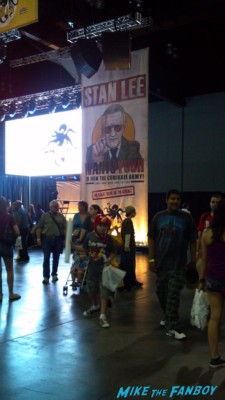 not because of where it was located or the “shows”, but because whatever woman they had announcing from it possessed the most horribly piercing voice. Great that she could be heard from everywhere, bad that it made my ears bleed. People were yelling at her to shut up from the aisles, I wouldn’t say anything if it was just me, but there were people all around me holding their ears and praying she’d go away. So maybe next year turn the volume down for her just a wee bit….just a suggestion. Unless bringing the crowd down en masse with brain aneurisms is the goal and then, you’ve found the perfect weapon!

I agree that the line situation was a cluster of the first order and they really need to figure that out. But otherwise I saw some really great costumes, bought some more stuff for my Steampunk outfit and just had a good day. I’m looking forward to seeing what the next few years might have in store.

The line when we got there 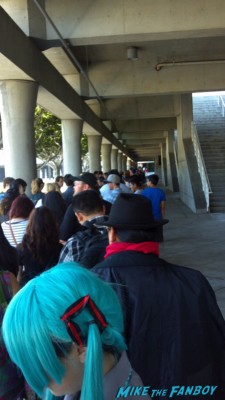 Thaddeus showing off wares at the League of Steam Booth (love them!) 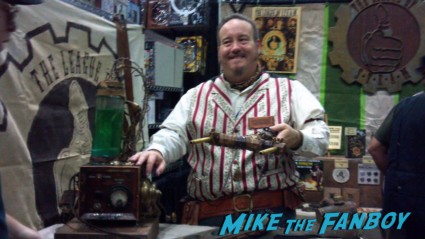 Ellie Copperbottom from the League of Steam out and about 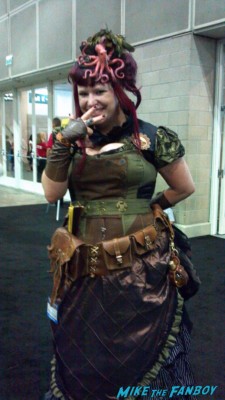 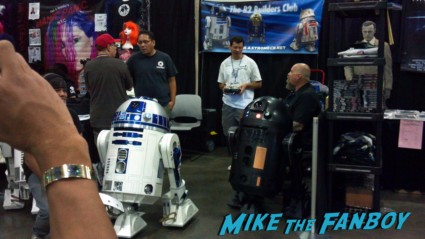 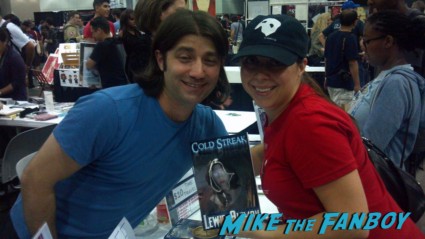