I’m so jealous of The Novel Strumpet! I really wanted to head down to the Festival of Books this year but couldn’t! First it conflicted with the Hollywood Collector’s show and Sunday I had already made plans! Doh!

The Novel Strumpet of course was there! Where there are books, there’s a Strumpet! LOL, check out her recap of The Festival of Books Day 1 after the jump!

Woo Hoo!!!! The Book Bacchanalia is back and I am ready to gorge myself! I meet my friends Lisa and Jenn at the subway @ 8:15 and after the ride to Union Station and the shuttle to the USC campus we got there @ 9:30, which isn’t bad. And there is the giant banner sign to welcome us all: 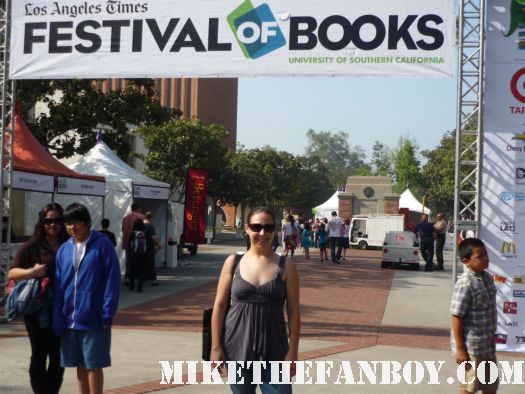 Honey, I’m home. The set up is pretty much like last year only they added the track field and moved the YA stage. 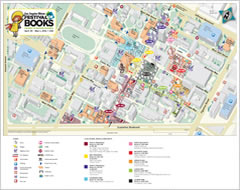 We all had time to kill before our first panels so we grabbed some iced coffee, planned our strategies (they had the same panels I was on my own…no surprise there since we all read VERY different things) and slathered on some sunscreen. We walked a few tents just to see, there’s the usual suspects – bookstores, independent publishers, creepy dianetics people…I mean awesome dianetics people who will help you handle your stress, unknown self-published authors, etc. – and of course I find the Jane Austen Society straight away. It’s a gift. I can smell the Regency aroma from miles around. After walking a bit and orienting ourselves I split from my friends and head to the first panel:

11am YA Fiction To Be Continued 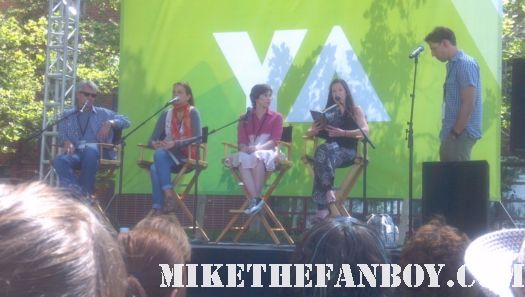 (L-R) DJ McHale of the Morpheus Road Trilogy, Margaret Stohl and Kami Garcia who co-author the Beautiful Creatures series, Lauren Kate author of the Fallen series and Aaron Hartzler the moderator and former creative director of the Society of Children’s Books, Writers & Illustrators

Thank goodness I’ve put on sunscreen numerous times already this morning because I am sitting in the sun. Too bad there aren’t any vendors selling parasols because I’d totally buy one right now. Umbrellas just aren’t fancy, plus I didn’t think about bringing one since I only had one outside panel and knew I’d be indoors the rest of the day. I’m always torn on these things…do I bombard you guys with all the stuff they talked about or do I just say “This panel was great?” If I did each one that’d be an article unto itself…hmmm….I don’t know. It’s hard to know how much you guys care about their stories….I will say that “Beautiful Creatures” is filming now and will be in theatres February 13 and “Fallen” is being optioned by Disney (they do realize that these books are about fallen angels and is pretty dark right?). We all laughed because they were talking about characters that were supposed to be minimal and yet those are the one that everyone loves. For Lauren Kate it’s Cam (the bad angel) which she based off her husband…hmmm….have to admit he was the most interesting character.

After the usual audience questions, I pushed my way through the throngs to the signing area. I’ve gotten my “Beautiful Creatures” signed by both authors so I only need to get “Fallen” (yeah, haven’t read DJ McHale). Problem is there’s only 30 minutes to the next panel, which is on another side of the festival, and there are at least 30 people in front of me. Thankfully the LAFOB Volunteers split us into lines for each author so now I’m down to 20 people in front. Hrm. I decided to take a pic of the Mystery Machine while I waited: 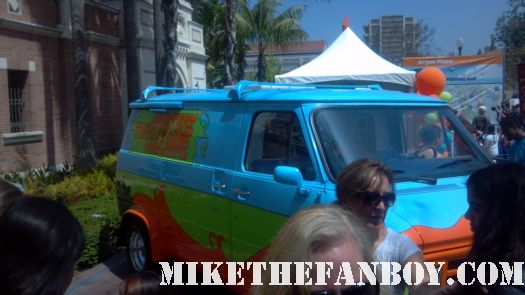 Thankfully I got the book signed and a pic with 10 minutes to spare. 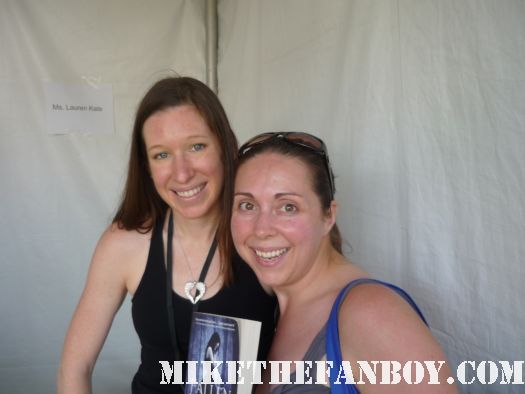 Denise Hamilton is a well known local mystery author but she’s no Anne Perry who is an icon. Well to me anyway. Anne Perry has 3 series in the US, some children’s books in the UK, and tons of contributions to other anthologies. I think overall she’s written 73+ novels. I love her Pitt and Monk series, never read the WW1 novels. If you love mystery, historical fiction, and just good storytelling read her. I was laughing at how stereotyped the conversation was in a way. Anne Perry has this lovely, soft British accent that makes you feel all warm and cozy. Denise Hamilton in turn sounded like she was shouting at us the whole time and came off strident and jarring. Not really her fault, I’ve heard her speak before and it never bothered me, but when compared to such a nice soothing voice…Can I tell you how I want Anne Perry to adopt me just so I can live in her house in North Scotland. I almost wept as she described the views, gardens, etc. She has that deprecating wit that I just love and had a chuckling several times. I admit, I’m in awe of her. She’s a hero of mine. Me and the other people in here who are at least 20-30 years older than me (I’m in my 30’s). It’s always fascinating to hear such established authors talk about their process and they way the industry has changed. She writes every book by hand in long form. I’m cramping just thinking about it.

I dash out of the panel and race to the track field where I have to ask a few people where the signing tent is. It’s hidden way in the back. I’m kind of insulted; don’t they realize how huge this woman is? Of course there is a line and this one is filled with the booksellers who get books signed so they can sell the autographed copies. At least they gave us a 3 book limit. I have 2. Not only does she sign them but she cordially agrees to have her picture taken: 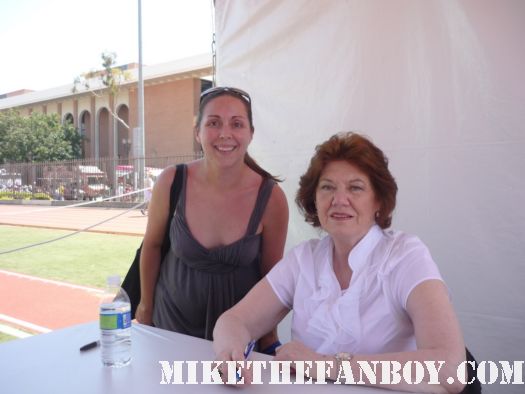 Not gonna lie, I was skipping away from this one. Giddy as a school girl and probably looking like a loon with how big I was smiling. I could barely speak to her I was in such awe. So I skipped on my personal cloud 9 to the next panel.

3pm Mystery and Magic in Mind and Matter – Hoffman Hall 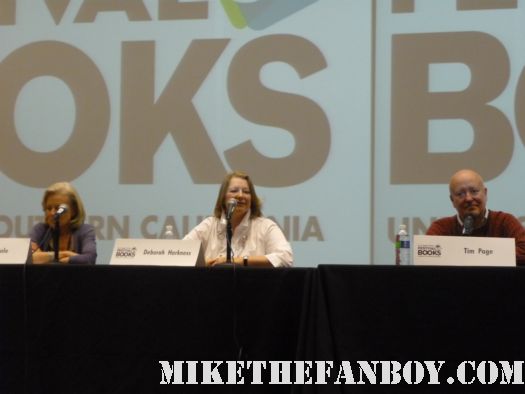 (L-R) K.C. Cole panel moderator and author of “Something Incredibly Wonderful Happens: Frank Oppenheimer and the World He Made Up”, Deborah Harkness author of “A Discovery of Witches” and Tim Page author of “Parallel Play”.

This was an odd panel. All three authors are professors at USC for Journalism, Music and History and all three were there to talk about books they wrote on Science or with scientific elements in them. Say what? At first it seemed like a panel someone dreamed up while smoking something…but in the end it made perfect sense. K.C. Cole had done interviews with Frank Oppenheimer (yes brother to A-bomb Oppenheimer) about some work he did with the hydrogen bomb and an experimental “museum” he had up in San Francisco where he just put out a bunch of toys and watched people use them without any instructions to guide them. Weird but cool. Tim Page learned in his forties that he had Asperger’s and his book is about that and how he doesn’t have the usual ‘symptoms’ (he looks people in the eye, he loves to make jokes and laugh) and Deborah Harkness is a History of Science professor which is why “A Discovery of Witches” has a lot to do with medieval alchemy. It was quite fascinating to listen to and the questions asked by the audience were quite intelligent and thoughtful. I should mention that I found it ironic one of the books was about the Oppenheimers since I could swear that the room we were in was once a bomb shelter. We had to go down to a basement like area and the whole thing was concrete and all my electronics died.

I kind of felt bad at the signing since we were all there to get Deborah Harkness. I mean the other books sounded interesting, but I’m not gonna read them. Sorry. 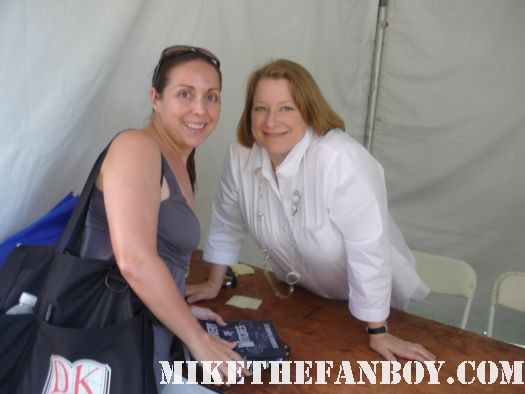 So time to head out to my last panel of the day….whew…..have I mentioned that all I’ve had today was a large iced coffee, a granola bar and some nuts? I’m glad this is my last one because in about an hour I’m gonna turn into the Hulk. A hungry strumpet is an angry Strumpet.

4:30pm The Real in the Unreal – Annenberg Auditorium 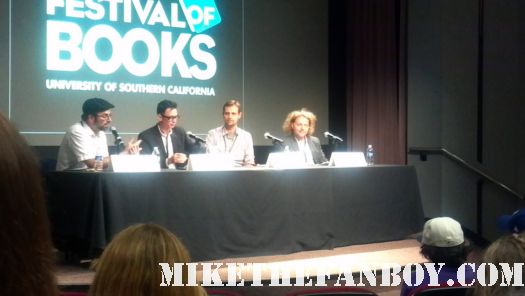 Ok, even though I’ve never read him, I’d recommend Jack Gantos’ books to anyone. If they are as funny as he is, then they have to be highly entertaining. He needs to have a Prairie Home Companion style radio show built around the town he grew up in which was founded by Eleanor Roosevelt. Seriously, him describing the lady with the paraffin wax for her arthritis was priceless. Evidently that’s what his book is based on. Of course I gotta have a soft spot for Ransom Riggs since he wrote a handbook on Sherlock Holmes…which I forgot to bring…grrrrr. I also discovered another of my Holmes authors was at the festival just signing and I didn’t have my book…double grrrrrr. I was fading in this panel. It’d been a long day, and aside from hunger my sunburn was starting to make itself known so I was overly warm as well. I could feel the beast rising. Thankfully the panel was quite amusing with all of their anecdotes and readings from their books. I like this concept, all book panels should do this, because it’s fun to hear the book in the authors own words.

After it was over I met up with my friends and we headed out. Of course on the way we spy a tent about literary tours in Britain so I had to stop and check it out. And then I had to buy two finger puppets from the lady: 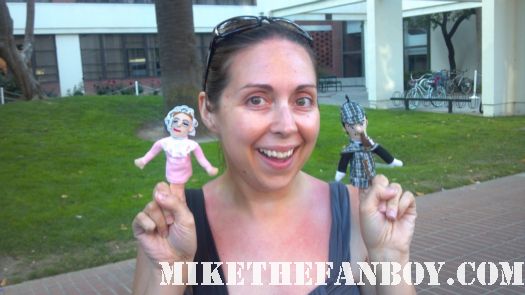 All in all it was a great day, on the shuttle/subway ride home we talk a bit about all we’ve seen and then just fall silent and stare listlessly out the windows. We are some tired chickas. Can’t wait to do it all again tomorrow!

And because the other Fanboy-ers do this I thought I’d try this ending as well…. 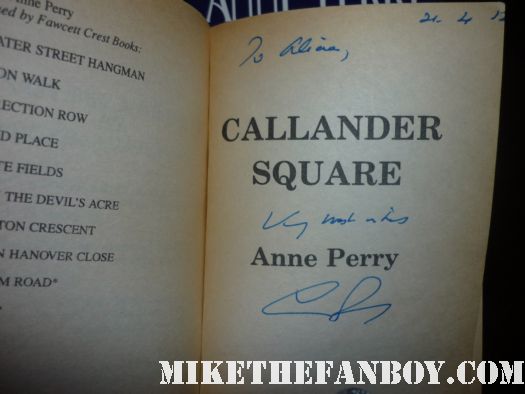 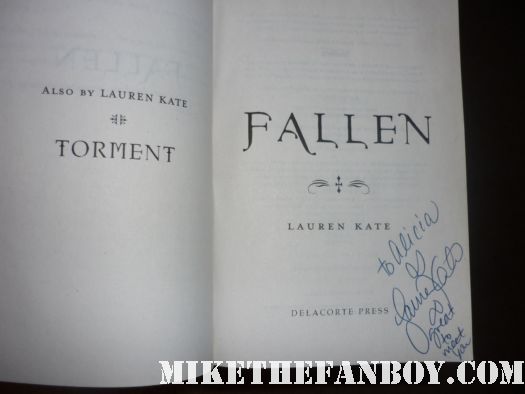 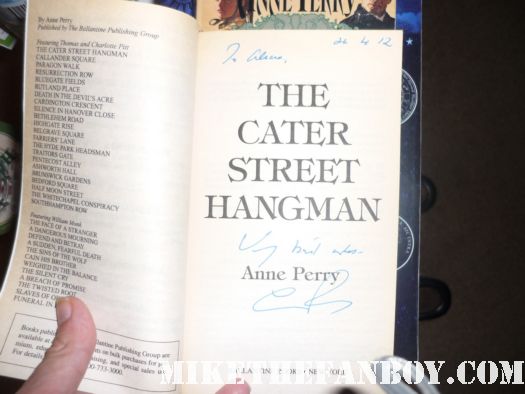 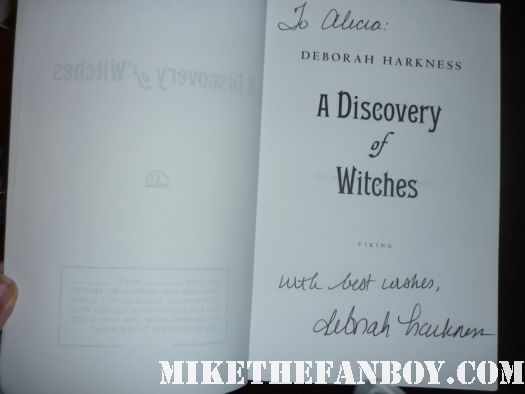