I know that this is part of a series and I know how the Strumpet loves this series… You can tell by the giddy nature in her writing, I can almost see her smile! LOL…

Check out the Strumpet’s review of Celebrity in Death after the jump!

Ok, I know I’ve said this before but these have to be ghost written and here is my sentence of proof:

WHAT!?!?!?! When did Eve step into a Jane Austen novel? There was a lot of similar wording, but this one took the cake. I rest my case. Anyhoo….

This book starts with Eve and Peabody visiting the set of the movie based on the book about the Icove case. Phwew. While Eve is “I’m uncomfortable with these people, especially since they all look so much like people I know”, Peabody is “This is so iced.” You know, the usual. Eve, Peabody, McNab, Dr. Mira, Nadine, and of course ROARKE *rawr* *swoon* *grrrr* attend a soiree held for them with some of the cast and crew that night. While watching a blooper reel for the film, the Peabody actress – one K.T. Harris, mega beeyoch extreme – is murdered. 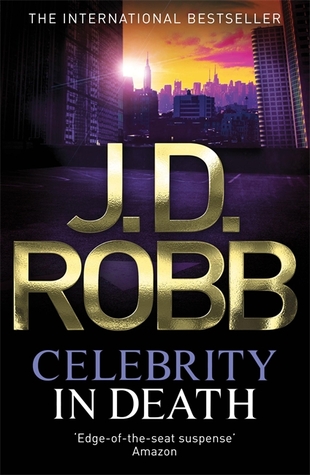 Now Eve and company have a large suspect list, more motives than she can count (seems Harris blackmailed, threatened and pissed just about everyone off) and is still dealing with the emotional trauma from Dallas. The ending was weak and there were so many things I questioned about it. I’ve seen Eve have a harder time breaking weaker people in interview before, so this just rang hollow…oh well.

Was it the best In Death, no, but it was still enjoyable. I wish they had played with the look-a-like angle a little more. Maybe the author(s) – tee hee – felt it would be too obvious. Sometimes I like obvious. Anyway, as usual the characters are the star of the show, and I guess after the last one it was nice to not have any real character development. I mean we’re all still trying to adjust to that one, am I right?