Psychics! Magicians! and Other Crazies Oh My! I hear those words and I’m like… Yes? Freaks?! Awesome! The Novel Strumpet has sent in this wonderful review of the new novel Dark Magic by James Swain… James Swain… That seems like something out of an old Western… “You dirty James Swain, get out oe my town!” Am I digressing? Yep… I like to do that… and since I’m Mike, I will Digress all I want… HAHAHAHAHAHAHHAHAHHAAHAHAH

I need to close this box of Nerds I’m eating don’t I? Yep… Rhetorical… I do… (Mike takes a large mouthful of Nerds and eats them)

Check out the Novel Strumpet’s review of Dark Magic by James Swain after the jump!

The book is set in NYC and involves a group of psychics, magicians, and others with special abilities who meet every Friday night to hold meetings where they look into the future for possible largescale disasters and try to stop them. At the center of this group is Peter Warlock, a real magician who disguises himself as a stage magician in order to fly under the radar. During one of their meetings he sees an event that will hit NYC in 4 days time and will kill thousands, but there is no indication of what is exactly causing the deaths. The only clues he has are the writhing bodies in the Theatre District clutching their heads and a mysterious figure standing and watching the chaos. With absolutely no clue who the figure is, no idea what is causing the deaths and only 4 days to unravel the mystery, how can they possibly stop this from happening? Especially when there is an assassin on the loose and his list of names includes every member of their group. 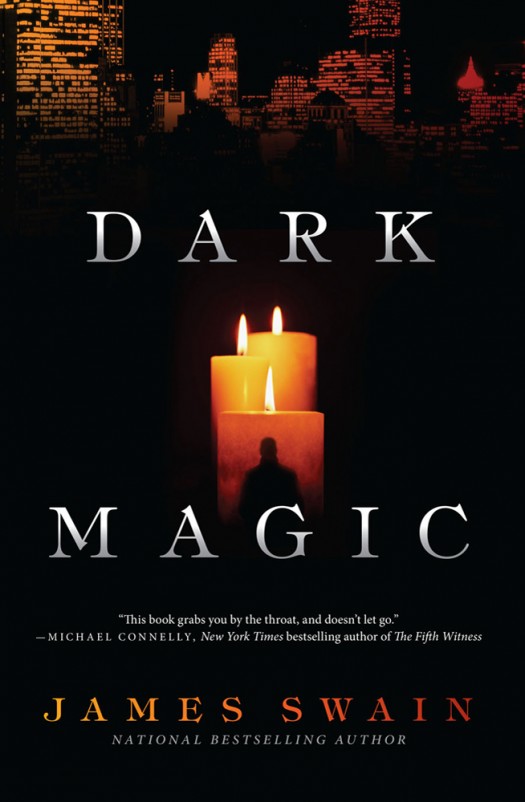 The Pros: The premise is interesting, the world building well done and the “what happens next” aspect keeps you reading. You know who the “bad guy” is pretty early on, but that only heightens the tension because then it becomes a race to try and locate him in order to stop him. Then there are those great plot devices of mysterious death of main characters parents, secret societies, magic, demon possession…you know all the goodies 🙂

The Cons: The love triangle is unnecessary and confusing. I kept trying to figure out why the women are getting so upset with the main character since it makes no sense whatsoever. Peter’s girlfriend, who is set up to be this paragon of saving grace for him, is a mega beeyoch. If she is the one thing holding him back from becoming a monster then we’re all doomed. It really bogs the story down. And for a man who doesn’t want to become some permanent guest of our government he sure does tell his secret pretty fast.

On the whole it’s an entertaining book even if there is a lot of things that could be better. If you can speed through the ridiculous relationship moments and get to the “action” parts then it’s quite good.

*eGalley provided by Tor/Forge via Netgalley