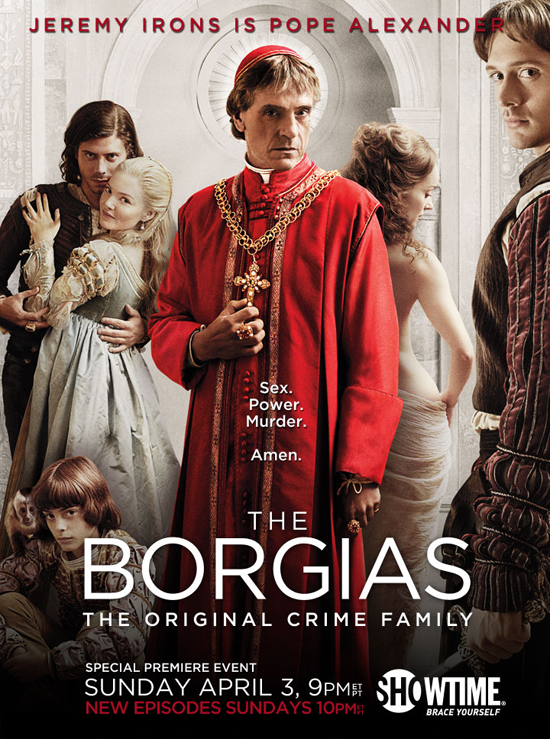 Everyone put your hands up and give a round of applause for our new columnist… The Novel Strumpet! This Strumpet is a talented lass who will be looking at fandom from a literary perspective.
I’m very excited to have a Strumpet roaming the halls of Mike The Fanboy so please give her a warm welcome!

For her first task, our Novel Strumpet has given us a wonderful review of the new Showtime Original Series The Borgias!

Check out her review below and a big welcome!

Ah, you gotta love men who believe in their own divinity. I’ve recently had a chance to watch the first four episodes of The Borgias from Showtime. I could go into all the historical stuff, but why bother, that’s what Google and Wikipedia is for right? So let’s get down to the real nitty gritty like costumes, acting, storytelling, etc.

I can’t tell if it was just good casting, great direction, fabulous costuming, all of them put together or something else, but it seems like nearly every scene has a moment where it looks like a Florentine or Venetian Renaissance painting. They’ve even got people who in profile look just like any painting you’d see hanging in a museum. Genius – whether planned or happy accident.

Storytelling has to be the strongest part of this show. From the start it never wastes time going into lengthy explanations about what’s what or who’s who. They’ll tell you the names, places, events but they use brief dialogue or scene shifts to show how it is important to this story so the audience gets just enough to understand what’s going on. So many times shows like this can get bogged down by the lectures so I like that they don’t allow that to happen. For me, that’s superb storytelling because it forces the watcher to actively research more on the topic if they really want to have more info. It’s like easter eggs, or whatever they’re called now, that are hidden in DVD’s. You’re not lost without them or not getting a really enjoyable experience, but if you find them they just enhance. And there is so much going on at this time I’m sure Google and Wikipedia are lit up like the Fourth of July. Machiavelli, Leonardo da Vinci, Christopher Columbus, Savonarola, the list goes on and on. It’s like a smorgasbord of history and you can eat as much or as little as you’d like. 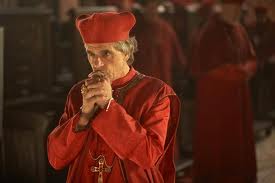 I also like the fact that they throw more coded words and phrases around than any mobster movie, and again they never force an explanation on the audience. You get it or you don’t. I love it when shows assume their audience is intelligent and we don’t have to be spoon fed everything. Yeah, they might screw around with historical facts here and there, but it’s Hollywood so what do you expect?
However, they do have those annoying scenes where the “spy” has to remind us he’s the spy. We just met him one or two scenes before. The “Tada! See I am the spy and I just begged money off the guy I’m following so now I’m going to take my hood off, look at him and then around furtively before putting my hood back on” moment is unnecessary. Honestly, that’s the stupidest thing a spy can do.
Some of my fave scenes so far: The “male” test when Rodrigo Borgia is elected Pope (if you wanna understand why this occurs look up Pope Joan). The scene where they are moving the flags of each aristocracy around for a wedding, especially since we just witnessed a huge royal wedding. I couldn’t stop laughing. I was just picturing Elizabeth II sitting with a map of Westminster Abbey moving little flags around and discussing why this person here, or that there. The banquet table in Naples – you’ll have to watch to see how deliciously twisted that is. And And Nicholas Rowe, star of the greatest Speilberg movie ever “Young Sherlock Holmes”….what? You question the greatness of that film… ;P
I also have to mention the acting. The star is Jeremy Irons’ voice. I mean the rest of him does a good job too, but his voice really steals the show. Can you give an Emmy to just the voice? Can we give a star on the Walk of Fame to Jeremy Irons’ voice? I’ll have to look into that. I seriously want to rent out the Hollywood Bowl one day and just have Jeremy Irons’ voice (the rest of him may come as well) and a few other choice actor voices read to me. I don’t care what, the phone book would sound amazing.

The rest of the cast is really good as well. I wish I could name them all but I’ve probably already exhausted your attention span so my faves are: Holliday Grainger as Lucrezia Borgia – she plays the perfect blend of naïve innocence with a slight hint of the scheming woman she could become. Sean Harris as Micheletto – gotta love the assassins. And Francois Arnaud as Cesare Borgia – first of all…YES PLEASE! Secondly…same as first. Outside of Jeremy Irons’ voice I could gush about Cesare all day. Honestly, as depraved and sick as it sounds, if that was my brother and Jeremy Irons’ voice was my father I’d completely understand how that incest rumour got started. I’d be in confession all day…except Jeremy Irons’ voice would be my confessor….I’d be doomed.

All kidding aside the show does touch on this rumor in a way. There are some moments between Cesare and Lucrezia that are a little squicky. Is it necessary to have him lie on top of her with his face so close to hers on the grass to just have a discussion? Or for him to lean in so close to her when she’s backed up against a pillar? In fact nearly every scene with them has some sort of sexual tension but it all seems to stem from him. I can’t tell if that’s just me reading into it or if the show is deliberately trying to send out mixed signals. There are times when they just seem like overprotective brother and baby sister, and times when you’re just waiting for him to cross that line.
Also, did they purposely make Cardinal Giuliano Della Rovere (played by Colm Foere) look like the priest in Disney’s “Hunchback of Notre Dame”? He seriously is discussing going to France in the series and all I keep thinking is that he’ll meet Esmerelda and the Hunchback and never come back. Especially because his character is starting to exhibit signs of a zealot. Maybe it’s just me, but I’m putting it out there. 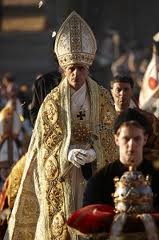 So, over all I’m really enjoying the series. Yes, there are moments when it falls into the usual pitfalls of episodic TV, but it’s still bloody fun. I can’t wait to get my hands on the rest of the series (I refuse to pay my cable company more so I have scrounge for the show in other ways). Will Cesare ever cross the line with little sis? Will Rovere meet Quasimodo? Will da Vinci show up at anytime (since historically I think Cesare commissioned him for weapons)? Will Jeremy Irons’ voice manage to seduce every woman within earshot? Will Young Sherlock Holmes solve the crime….wait…scratch that one. Sorry.

Ok, I’ll leave you with my new t-shirt quotes: “God will forgive us, but I will not forgive failure…”
“God will take his revenge…with our help.”