I know, it’s been a hot minute since I wrote the last anime blog, but I’m going to be honest here and confess that I have fallen so far down the MXTX rabbit hole (author of Mo Dao Zu Shi which I wrote about already) after finding translations of the other two novels, as well as their donghua releases, my brain has not allowed me to sit and write anything because I’ve been too busy with reaction videos, fan-made videos, novel readthroughs on YouTube, etc.

It’s a sickness.  I don’t want a cure.  I’d blame it on COVID, but let’s be honest I’m an obsessive fangirl anyway so…anyhoo…I’m finally trying to write this post for Millionaire Detective: Balance Unlimited.

This little gem aired recently and from what I can tell is only going to be one season.  Sadness is mine, but the season we have is quite entertaining IMHO.

Haru Kato is a detective in the Modern Crime Prevention Task Force, which isn’t the most glamorous division in the police department.  He’s suddenly assigned a new partner, Daisuke Kambe, and the two couldn’t be more opposite.

Kambe is a millionaire and uses his family’s wealth to essentially do whatever he wants, which doesn’t sit well with Kato at all.  Not to mention there’s a lot of mystery around why Kambe has even become a detective, especially when it appears that he has his own agenda and solving the crimes assigned to the MCPTF isn’t on it. 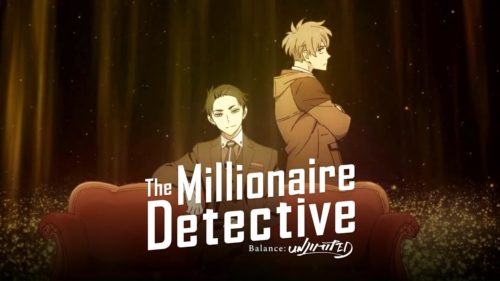 Oh, Daisuke Kambe.  You stereotypical rich boy with gadgets and no f*cks to give.  How you entertain me.

I knew I was going to like this show from the first episode when Kambe just watches Kato hang from a bridge and instead of offering to help pull him up, he watches Kato lose his hold and fall into the water far below.

Kambe is a little bit James Bond mixed with some Bruce Wayne – too rich for his own good and with a lot of gadgets.  He has his own Q/Alfred in the guise of Suzue Kambe, a relative although we don’t learn exactly how they are related.  He also is a little bit of the movie version of Tony Stark with his own Jarvis in the form of HEUSC, a computer system he relies on to assist him in his ‘detective’ work.  Which mostly consists of Kambe taking his own path to justice and having HEUSC send large amounts of money to anyone inconvenienced (like the man who’s car he confiscates for a chase, buying concert tickets for a bunch of ladies who might miss their show due to a hostage situation, etc.)

Kato is the typical harried, by the book, softhearted character who has a strong sense of justice and doesn’t like taking short cuts to see it is served.  Needless to say that Kambe’s unorthodox way of doing things does not sit well with Kato.

They’re your typical opposites that work ok together.  I can’t say that Kato every really gets over Kambe’s penchant for doing whatever he wants and then just throwing money at people to cover his *ss.  Kambe never really understands why Kato is so rigid in his views at times.  However, once they start relying on each other they click really well and make a good duo.

But really, for me, this show was all about Kambe.

Only said with minor sarcasm. Is Kambe a bit hard to like because he’s got so much money that he doesn’t really need to be nice to people?  Yes.  Does he kind of torture poor Kato a bit just for fun?  Possibly.  Can he get away with anything because all he has to do is tell his computer butler to throw money at a situation and all is forgiven?  Absolutely.  Which is why I find his character so much fun.

However, you do learn there is a dark side to his life.  He saw his father standing over the body of his dead mother with the bloody knife still in his hand, and the more he digs into the events around his mother’s death the more he slowly starts to learn there is a conspiracy within his family to stop him from learning the truth.  He essentially uses the MCPTF as his own personal MI6 to gather intelligence on his mother’s case.  The closer he gets to it, the more he starts to become a target.

The other thing about him is that he’s so deadpan in his approach to everything, that I can’t tell if he comes across as uncaring about Kato’s safety when they’re together because he honestly doesn’t care, if he’s just that hard-pressed to show emotions given his past, or if he’s that confident in Kato’s abilities to look after himself that he doesn’t feel the need.  I think it’s a little of all three.

He may not be the most unique character out there, but I really like him, mostly because of his over the top lack of concern to do things “by the book”.

But don’t think Kato is just there to be Kambe’s foil.  He can be a little over the top and goofy at times, but he’s also a really good detective in his own right.  You learn through interactions with other officers at the station, that he was actually really well-respected and one of the top officers, but after having to fire his gun during a robbery gone wrong, he was unable to get over the psychological trauma and ultimately got moved to a lower division.  I liked that the show explored this type of trauma for an officer, although it would have been nice to maybe see the department give him support through therapy rather than having him just ask to be moved to another division where he knows he won’t have to handle a weapon.  It made the effort, however.

The dynamic between Kambe and Kato is a lot like the television version of Dragnet.  They’re both the very straight-laced, hard-boiled detective types.  And like that older television series, it works really well.

That’s not to say there aren’t some funny moments, I mean there is the bridge scene I mentioned, the ubiquitous “rich guy forgets wallet and has to stay with poor partner” episode, and moments where Kambe essentially steals Kato’s informants out from under him and get them to assist in leaving Kato in the dust (or the blown-up rooftop as it turns out in one episode).

I like that they don’t really have that moment where either has a big speech that shows they’ve come to trust each other and instead, it just happens, they sort of acknowledge and move on.  Will they ever truly see eye to eye?  Probably not, but I love that the end of the last episode leads us to believe that the working partnership is alive and well.

Ok, so yes, this is a little like the original Dragnet, and yes, it is very reminiscent of those old hard-boiled detective novels, but I have never disliked a voice acting choice so much as I do the choice for the English dub of Kambe. No disrespect to the actor, evidently the team behind the Dub version agreed with the choice or even directed him to do it, but I don’t like it at all.

I admit that sometimes if you’re used to hearing a character done in one style (the original Japanese vs. English dub) that to hear a different vocal approach can be jarring, but that’s not my issue here.  My issue is that for some reason the Sam Spade vocal approach of the English dub makes Kambe sound like a mid-life, been there seen that and lost all hope type, instead of a late twenties, got the world at his fingertips, bored rich kid type.

I just can’t wrap my head around it.  It was so jarring I barely heard 3 minutes before I knew I couldn’t watch the English dub.  And I hate that because I tend to like watching both versions – sub because sometimes wording choices are translated out differently between the two, and dub because it allows me to watch the action on the screen more and I sometimes catch things I missed in the previous viewing because I was reading subtitles.

It’s a fun show and one I think someone can get through rather easily.  A nice break from all of the overly emotional dramas I’ve been watching lately.

Also, the opening and ending credits have some really fun music and yes, I’ve already added them to my Spotify library.  Plus, the opening sequence is so James Bond you have to love the audacity of it all. Not to mention that for all of its modern-day gadgets and setting the show does carry a very 60’s vibe at times which I think gives it a nice little flair.

What did you all think?  Did you enjoy Millionaire Detective?  Do you think the dub is as hard to listen to as I do?

Not sure to be honest.  I have a list of shows to write about and can’t quite make up my mind, so we’ll see which one calls to me.

Is it just me, or does a Kambe without hair gel look like he’s the character in every high school anime?

Another great shot from the opening theme:

Ok…one more because I seriously love the opening:

I love this image as well, it’s so retro but modern too: