In the world of anime, there are quite a few that I think are widely recognized as “gateway” shows.  Shows that someone who may not be a fan of anime would watch and then think – maybe I’ll give something else like this a try – and then the search begins and down the anime rabbit hole you fall.  Ouran High School Host Club was one such anime in my humble opinion.

So what is it about?

Ouran Academy is a super-elite school that caters to children of the rich and powerful.  Haruhi Fujioka is a student of modest means who got into Ouran Academy as an honor student.  One day while searching for a quiet place to study Haruhi stumbles into an abandoned music room only to learn that the room is being used by a group of students as a Host Club. While the members give Haruhi the third-degree an expensive vase gets knocked over.  In order to pay back the cost of the vase the leader of the Host Club – Tamaki Suoh – declares that Haruhi will now become their errand boy to work off the debt.

However, one by one the members of the club begin to realize there is something that seems different about Haruhi aside from being a commoner and soon it dawns on them all that Haruhi…is a girl!  However, that doesn’t deter Haruhi from fulfilling her duty to pay back her debt so she agrees to continue as a host until the debt is settled.  And thus her life as a Host begins. 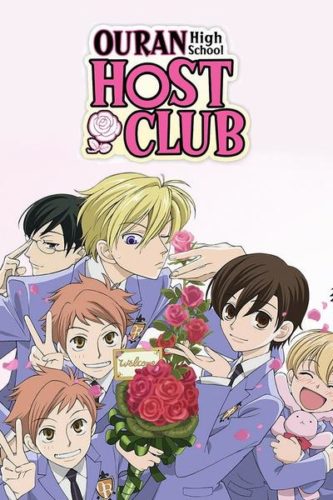 The reason I say it was a “gateway” anime is that it was super popular back in the day, introduced people to the comedy romance genre and if you wanted to learn about a lot of anime tropes, this was the one to watch.  However, it’s been over a decade since it first aired and there are some things that don’t really hold up in the modern era.  But we’ll get to that.

So what tropes will you learn about from this anime?  Well here are a few:

Host Clubs/Themed Cafes – Host clubs are where the staff of one gender caters to the other gender by serving drinks (usually with alcohol) and giving them a lot of attention through conversation and possibly some light flirtations. Themed cafes are just what the name suggests and in these guests are catered to and the servers dress in the theme like wearing butler costumes in a butler cafe. Ouran Host Club combines the two by serving their guests (who are all young ladies attending the school) coffee/tea and snacks along with conversation and light flirtations on a daily basis and will often dress themselves and the clubroom in themes like knights in shining armor.

Male Archetypes – There is a list of archetypes amongst male characters in romance/shoujo anime and this show hits quite a few, especially in a reverse harem (see below) scenario. There are:

The Boy Next Door (Haruhi fills this role)

and most disturbing of all Twincest (Hikaru and Kauro Hitachiin).

Then there are other character archetypes – some fulfilled by the Host members through some of their cosplay antics and some by other characters – like otaku, goth, delinquent, megane, etc.

Reverse Harem – So “harem” is pretty popular in manga/anime.  As the name suggests it refers to a character of one gender who is surrounded by characters of another that pay them a lot of attention.  It’s not always of a romantic nature but usually has those overtones.  What makes this a reverse harem is that it’s a girl surrounded by boys.

Androgyny/Cross-dressing – I don’t know if it’s a coincidence this pops up in a lot of anime I watch, but it seems to be pretty prevalent – LOL. Haruhi is mistaken for a boy simply because she isn’t wearing a skirt when the Host Club first meets her.  Instead, she’s wearing clothes that would typically be categorized as “male” and since she starts off that way she spends most of the show passing herself off as a boy so she can be a host.  And while her style is more comfort over fashion, her father is a true cross-dresser and likes dressing as a woman.  And other characters may dress as the opposite gender from time to time.

Super Frugal Poor/Clueless Rich – Haruhi’s family isn’t that rich and it makes for some hilarious moments when she brings out her frugal side around a bunch of rich kids.  This seems to be a recurring theme when it comes to kids in elite schools.  There always seems to be the one scholarship kid whose penny-pinching ways draw a lot of fascination from their “want for nothing” counterparts who are fascinated by how ‘commoners’ do things.  The scene where Haruhi buys instant coffee and it almost melts the brains of everyone else in the club room is one of my favorite in the entire show.

And this is just the beginning.

In a lot of ways the show takes archetypes and flips them on their head.  Haruhi, unlike most female characters in this type of show, isn’t some insipid girl who spends way too much time with a vapid look on her face and winning over boys because she’s so nice to the point of allowing them to kind of bully her.  She’s got a mind and opinions and isn’t afraid to use either, and I appreciate the show doesn’t have the other characters react to her like she’s a b*tch.  Instead, they respect her for this (mostly).  Also, she doesn’t care about gender assignments when it comes to fashion or romance and doesn’t have that annoyingly soft voice that most female protagonists in this genre do.  Honestly, she’s probably one of my favorite female characters in a show of this type.

Then there is the way the show takes the male archetypes and skewers them. For instance, the “Boy Lolita” is always a super sunny character, who is adorable to the point of toothache, and while Honey can definitely be that way, he’s also renowned and feared martial arts master that I would never want to piss off.  If he says to give him cake, I’m giving that kid cake and don’t care if he has a thousand cavities, let Mori-senpai deal with that.  Tamaki’s “Prince-like” character is usually someone who does everything to perfection and is suave and debonair, but Tamaki is a big ole goofball who is constantly falling on banana peels (I kid you not this show just drops them in for no reason) and sticking his foot in his mouth because he’s pretty clueless.  However, when he does do something truly noble, he nails it.

And while the show definitely plays up the ‘boy love’ themes by having the characters do things that give massive fan service to their visitors (and the audience), the characters aren’t really one dimensional.  Over the 26 episodes, we get to know a lot about each of the host members’ backgrounds and pasts which really helps to add a lot of depth to them and I think that’s why you truly come to love them.  But the fan service doesn’t hurt ;P

The scenarios of the show are definitely over the top – I mean random pratfall banana peels, just saying – but the host club does a lot of good for its visitors, mostly because Tamaki may be a bit of a clueless narcissist but he’s also one of the most selfless people in the entire show.  He genuinely wants to make people happy and while it may come from his desire to surround himself with a makeshift family, it’s that desire that makes him so sympathetic to the people who come to the club for assistance.

But it’s not all fun and games….

This show isn’t without its issues, some of which are exactly what makes the show so fun.  However, almost fourteen years after it first aired there have been a lot of changes in public sentiment about certain things and that can make a rewatch slightly uncomfortable.

As I mentioned there is a lot of cross-dressing in this show.  A lot.  And while some of it tries to break through the barriers of societal norms to make it acceptable – for instance Haruhi’s dad gets mad when someone brings his cross-dressing up and he points out his wife didn’t mind so why should anyone else – for the most part, it’s a gag. For instance, the other Host Club members crossdress to make Haruhi laugh so she won’t leave the club and go to an all-girls’ school.  It tries to treat cross-dressing as something that shouldn’t be a big deal but at the same time, makes it over the top for a laugh.  Ugh.

Then there is the moment Tamaki expresses a sentiment that comes off pretty intolerant of LGBTQ+.  There is a rival all-girls school who show up to invite Haruhi to come to their academy and one of the young ladies flirts pretty heavily with Haruhi and Tamaki outright says that women aren’t meant to be together, that is why God created Adam and Eve.  OOOOOOOOF!  Not good.  Not good at all!

Also, there is the mommy/daddy thing.  Now, understand that a lot of anime have two male characters that are referred to as the “dad” and “mom” of the group, usually, because they’re the two who lead the team or club and not necessarily as a derogatory thing, in this instance, Tamaki (President) and Kyoya (Vice-president) carry those monikers.  However, for some reason the way Tamaki runs around asking Haruhi to call him daddy or referring to himself as her daddy is a little more creepy than goofy.  Especially coming from a male high schooler to a female counterpart.

And I won’t even to into the twincest thing.  The only thing that saves the Hatachiin twins from being super uncomfortable to watch is that you know they’re only doing it for show.  But still…just…yeah…no.

Don’t get me wrong, in a lot of ways the show still holds up.  Haruhi especially says a lot that is truly positive in nature and there are episodes that do have some positive messages.  However, in other ways, like the few examples above and some I didn’t mention, it’s a little out of tune with the times.

I told you I’d bring this up every time he voices a character and Kyoya is voiced by none other than J. Michael Tatum – sans full-on British accent this time but there is a slight hint there.  LOL…how many shows does that make out of the ones I’ve blogged about so far…3 I believe.  And there will be more to come ;P

I still like the show, despite some cringe-worthy moments, and it’s still something I would tell people to watch if they want an anime that has a lot of comedy blended with some romance.  And despite some of the bad things I’ve said about Tamaki, he is a likable character who just sticks his foot in it at times.

Oh, and in case you’re wondering who my favorite character might be…hard to say because they all have their charms and their flaws.  Also depends on my mood.  LOL!

So, any of you watch Ouran Highschool Host Club back in the day?  Have you watched it recently and does it still hold up for you or do you find it a little awkward now?  Let me know in the comments or hit me up on Twitter!

The fanart made me do it.

Haruhi’s feelings for pretty much the entire show:

Visit to a commoner’s abode: