The Scarlett Starlet is on the hunt again! This time our resident UK fan went out the meet the Bondi Rescue Lifeguards… Now, I know this isn’t over here in the States, but it is a super popular show on the other side of the pond, and from what I can see on you tube I can see why. It’s a really great show, and there are plenty of beach shots… lol…

Check out the Scarlet Starlet’s full report after the jump!

So the message went out on The Bondi Rescue Lifeguards Facebook page: “Come and say hello to Hoppo, Reidy, Maxi & The Gonz, 12noon this Sunday at Giraffe Restaurant, 11 Frith St, Soho, London.” and so I thought “Yes; yes, I will!”

So Sunday 7th August saw me boarding a train to central London to meet some of the lifeguards from Bondi Beach, Australia – stars of ‘Bondi Rescue’ on CBS Reality – on a visit to Europe. You will notice the original message doesn’t give too much information about what to expect – signing event? Meet and greet? Possibility for photos – fortunately for me, it was all of these!

Having caught a later train than I originally hoped, I turned up at the Giraffe Restaurant at 11.50 – I’ve never been that ‘late’ to a signing – and I thought, either there’s not going to be anyone there, or I’m going to find myself at the end of a rather large queue! Fortunately, the sight that met my eyes was a happy medium; about 10 people clustered inside, and just starting to trail out the door. Perfect for positioning myself at the end of the ‘queue’ allowing full view down the road so I can see them coming. What I actually see is Maxi hiding around a corner, trying to look inconspicuous! It appears that the others are already inside so he has to run the gauntlet of (surprisingly calm) fans through the door and up the stairs!

Then Giraffe staff (try saying that 10 times quickly!) step in with some organization for us; we’re queueing up the stairs, and can go ahead 10 at a time. Its a great atmosphere; everyone is really chilled, chatty and patient. The first two lots of 10 are taking quite a while – this leads me to believe I’m likely to get a good chat!

Reaching the top of the stairs I see the guys are all smiles; the girl in front of me is the first of our 10, and gets a group photo with all of them – Hoppo, Reidy, Maxi and Gonzo – then they break from the group, and do their own thing! Hoppo smiles at me, and reaches out for the record cards I’m clutching (never leave home without record cards and sharpies!). He asked for my name so he could make the autograph out to me! I had time for a quick chat and asked him about what he’s enjoyed seeing in London. Then Hoppo espies Reidy momentarily fan-less and we have a photo together – “a rose between two thorns” says Reidy with a big smile. 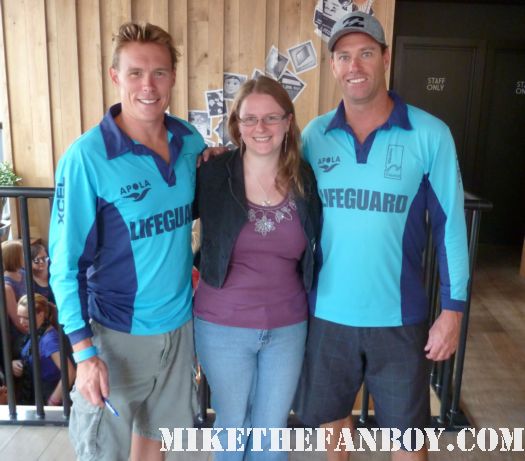 As the pose breaks I abandon Hoppo for Reidy – he is my favorite – he was very sweet, he also asked my name so he could sign for me. I strove for less run-of-the-mill questions; and I had a few minutes of his undivided attention while we chatted, which was awesome.

By then, a few others were clamoring for Reidy; I noticed Maxi was unattended and he kindly signed for me too. I asked him how he was finding the event – he said they had been worried that no one would turn up. When I told him they were queueing out the door he was surprised (and, I think, rather impressed!). A nice stranger took a photo for me (the woes of going out for fandom on my own!) 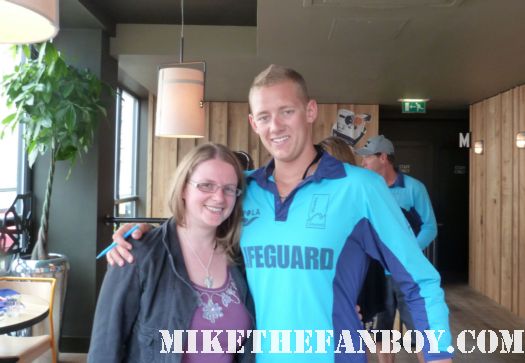 I found Troy (Gonzo) just ending a conversation – he was hanging back slightly from the general clamor around the others, but he was so very friendly! I asked him about the sightseeing he’d done, how he was finding England, where they were off to next, the weather (so very British of me!) and how he found these events. I also told him about the length of the queue, and he did look a little worried when I estimated another 4 lots of 10 were still waiting down the stairs and out the door! 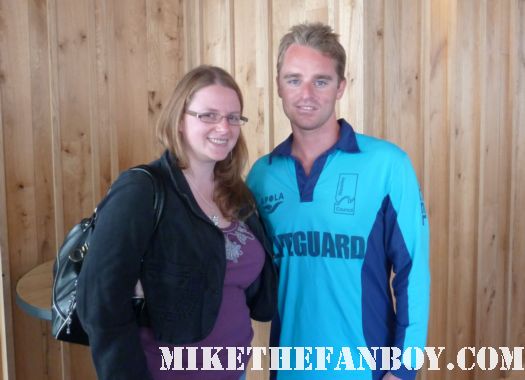 Our lot of 10 were thinning out, and I mentioned to Troy that I was going to lurk in the hopes of getting a group photo. ‘No problem’ he said, moving towards them – “It’s okay, everyone’s busy at the minute, I’ll wait!” I replied, but, bless him, he rounded everyone up for me and I got my fab group photo. 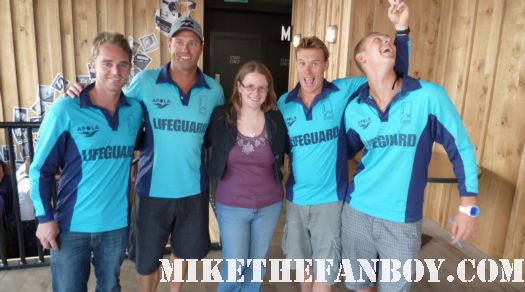 Awesome event! One of the most chilled out I’d ever been to, and it was fantastic getting the chance to chat as well! 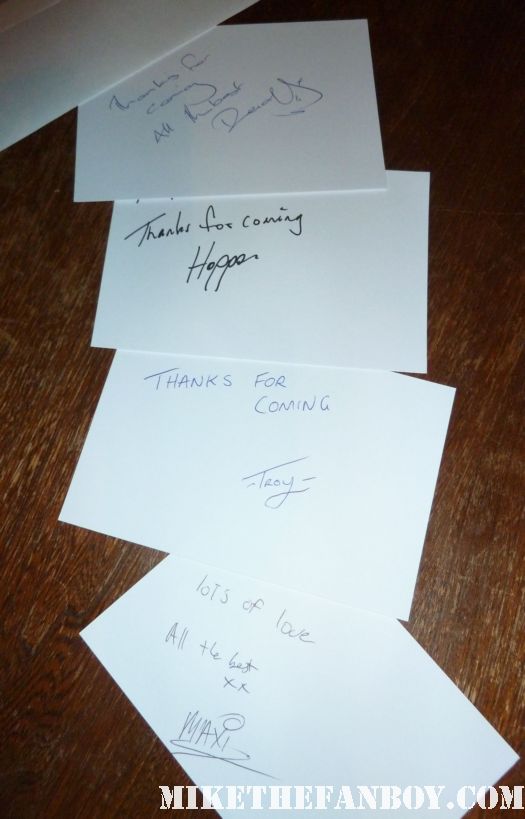