I checked my inbox just a second ago and low and behold a new report from the Scarlet Starlet! I’m so excited! I love getting new reports in my inbox especially when it’s something really great and fun like this one. We don’t have enough author signings here on MTF… Hello, Novel Strumpet get on that!  And so when I saw this one by Eragon author Christopher Paolini I was really stoked. I had a bunch of friends meet Christopher here on US shores I think at comic con but who can remember.

What I did remember was that he was super gracious and kind, which is a rare treat! I think authors are a tad nicer than some actors probably because they can live a predominantly normal life.

But before I start pontificating on life, I will let the Scarlet Starlet take it away and tell you here encounter with meeting Christopher Paolini at one of the UK’s top bookstores Forbidden Planet! And yes I’ve heard of it! LOL…

Take it away Scarlet!

Hosted by Forbidden Planet, an epic comic-book and all-round sci-fi fantasy den of awesomeness, today there is a book signing with the one and only Christopher Paolini, author of the Eragon cycle of books. Now, I’m a little surprised at the timing; the last book in the quartet, Inheritance, isn’t out in the UK until November, but here we are on 28th September – however, Mr. Paolini hasn’t been to the UK shores in at least five years, if memory serves me correctly, so I’m off with book in hand to London’s Shaftesbury Avenue (theatre area of London, for those of you not in the know). And I’m not on my own – Christopher Paolini is my sister’s favorite author, so she’s with me too!

Okay, this is not a good start. We’re late, and it’s my fault. Strangely enough, all the bookshops in the vicinity seem to have sold out of Mr. Paolini’s books… funny that… and I’m usually so good at forward planning!

Right! The event is due to start at 6pm, and we make it through the doors about five or ten to. We go downstairs, and there is a vast conglomeration of people – we’re not there more than two minutes before someone takes to a stage and a microphone and begins introducing the guest. Unfortunately, I can’t see round corners; but I can hear, as Christopher Paolini proceeds to read us a sneak peak of ‘Inheritance’ and takes some questions from the audience. It’s a bit difficult to hear as we’re quite far back, but he’s taking lots of questions from a lot of different voices! :0) As the Q&A ends the conglomeration start to try and re-form an orderly line (which apparently existed before we arrived). Being very British, we find the queue and join it. And wait.

We are moving incredibly slowly; I still can’t see anything – not a signing desk, nothing! We’re snaking around bookshelves filled with interesting things, which we’re happily browsing, but this queue is moving preeeeettty slow.

6.45pm – we’ve moved probably a grand total of three metres, but we’re nearing the corner; my betting is that just around this corner is the signing desk… can’t be long now. Some more people have joined the queue, but not more than another 20 or so, so we’re womanfully bringing up the rear. I’m okay with this.

6.55pm (ish) – ye gods! We’ve rounded the corner only to be faced with the prospect of another gigantic U shape around some more bookshelves! We can see Mr. Paolini, he is being very friendly; signing as many books as people have with them, and happily engaging and chatting with everyone; and he’s doing photos as well. That’s awesome! But I’m worried now, because the event is due to finish at 7pm.

We’re winding around bookshelves. I’m getting very anxious – we’re in a shop; are they going to close up? They’re summoning customers not in the line to finalize purchases (did I mention that there are shedloads of copies of the Eragon books for sale here? I really needn’t have worried!). I think they’re turning lights off at the other end of the building. I think my sister is going to stage a sit-down protest if they ask us to leave before we meet him! 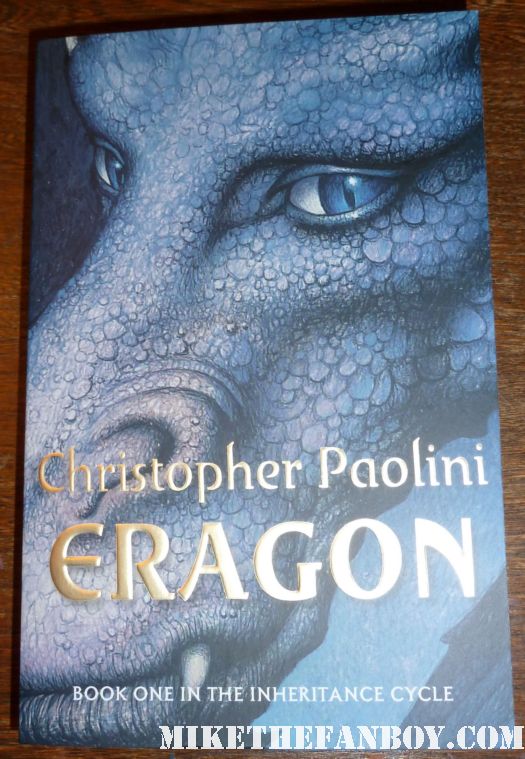 7.15pm – we’re getting closer, inch by inch. No one has asked us to move yet. There is a small child behind us who keeps walking into us and banging us with his rucksack. Not cool.

7.20pm – we’ve rounded the final corner; onto the home straight!

7.30pm – OMG the shop closed half an hour ago, but Christopher shows no sign of leaving, or rushing – kudos to that man! I think the Forbidden Planet staff also seem happy to finish the line; with any luck I think he’ll have got through us all by about 8…

It’s exciting, the closer we’re getting to the front… I love the set-up of the signing desk – there’s something awesome about having a backdrop of millions of sci-fi/fantasy books!

My sister goes first, then, Woo-hoo! It’s my turn! He asks my name so he can personalize, which develops into a conversation regarding odd names (sometimes I love having an unusually spelt name!) – and he also admires my Lord of the Rings Arwen Evenstar necklace. He has beautiful handwriting, and kindly signs a record card for me as well as my book, and poses for a photo. 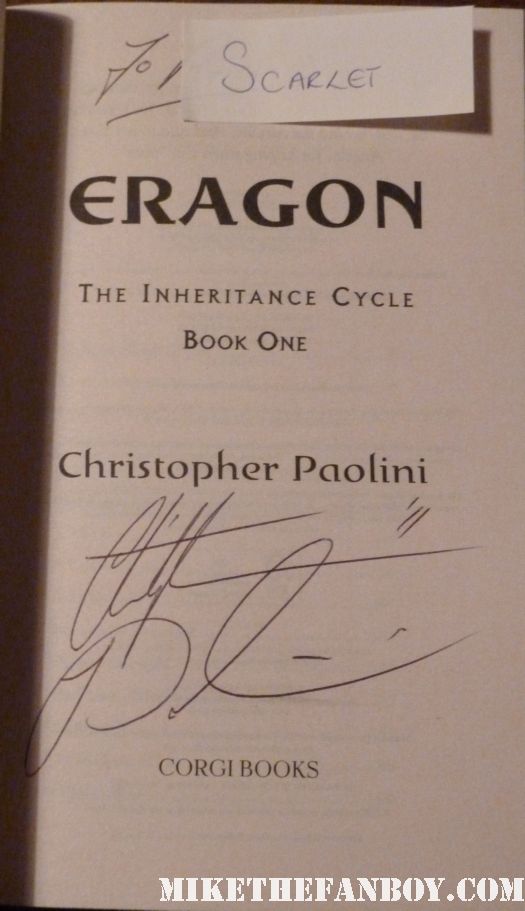 Awesomeness – a really nice chap and great to his fans! Staying on for what has to be pretty much an extra hour to sign for everyone that came to see you is pretty damn good in anyone’s book! 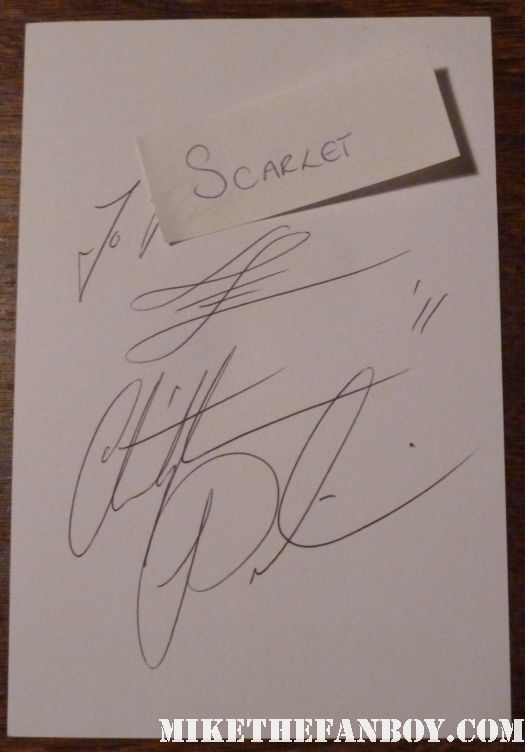 (In case you were worried, we do ultimately manage to get out of the shop – a security guard lets all us stragglers out individually; although a night camping out in Forbidden Plant could have been cool, I did have work the next day!) 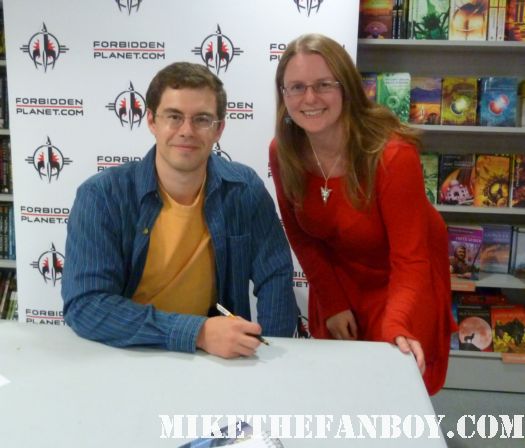