The Scarlet Starlet! It’s been ages since we’ve heard from the lovely young lass on the other side of the pond. I think Scarlet and Daniel got together to form British week here at MTF. LOL…

Now, I love hearing about someone getting their favorites! And Scarlet was able to get one of her top three people ever! I have to really think about who my “new” top three are… hmmm… Gosh… Anyway, I’m digressing!

Check out her full report from the festivities after the jump!

This report comes to you from a hyper-happy fangirl! Its the joy that comes from getting an auto from one of your top three most wanted! 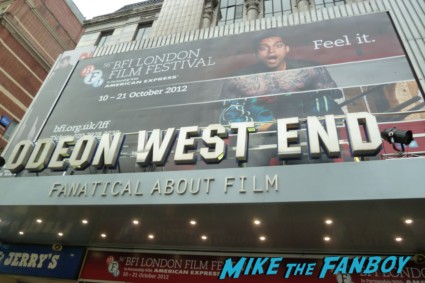 Its been about 5 months since I’ve headed out to a premiere, and this one was so worth it! I’m out for the premiere of the film ‘Blood’, which is being shown as part of the BFI London Film Festival; the film stars Paul Bettany, Mark Strong and Stephen Graham, and is directed by Nick Murphy. I’m really excited to meet Paul Bettany, and I’m wondering whether he’ll bring his wife, Jennifer Connelly, as he did for a previous premiere which I missed, as I’d really like to meet her too! I’ll skip the waiting around bit and get straight to the action which begins about 3pm. 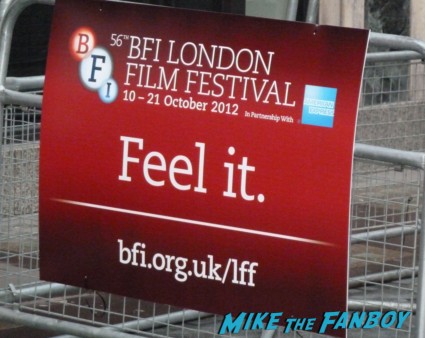 Okay, so its very wet. In fact, its the only day this week its been due to rain, and rain it has! (Why is it in my reviews I can’t help but commenting on the weather? It must be the innate Britishness that means I’m constitutionally incapable of not mentioning the weather!) But I digress – Around 3pm its a dry moment and the barriers are starting to be set out. This premiere begins at 6pm, so we reckon its only a couple of hours until the guests arrive. The crowd is comparatively small, but as my last premieres were huge (MIB 3 and Avengers Assemble) I’m good with that!

I really like the movie posters for this film; there’s something beautifully atmospheric about them. 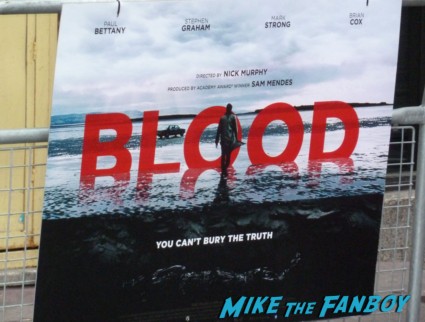 About 4pm they put out the red carpet, and with supreme irony it is just after they finish that the rain starts again – and its not letting up! 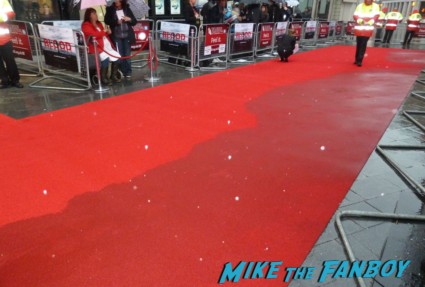 We spend our time watching the carpet soak up the rain – I reckon the effect adds emphasis to the film – you could almost believe it was planned to make the carpet a bit more ‘Blood’-like! Although a little pool of rainwater is forming by the entrance, which a couple of chaps are addressing with brooms… 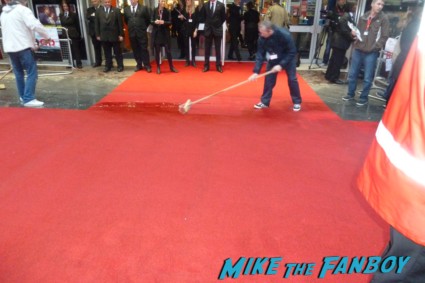 Then all of a sudden, Paul Bettany is on the carpet! I am so excited! I’ve wanted to meet him for ages, and kicked myself for missing the ‘Margin Call’ premiere, which was the last event I’m aware of him doing recently. I love all his movies – especially A Knight’s Tale. I’ve just seen Priest and even though its received some poor reviews, I thought it was brilliant! Mr Bettany himself I think is very talented and a very underrated actor… Please excuse me while I rave!

He signs at the other end of the carpet, before crossing over to do some interviews. 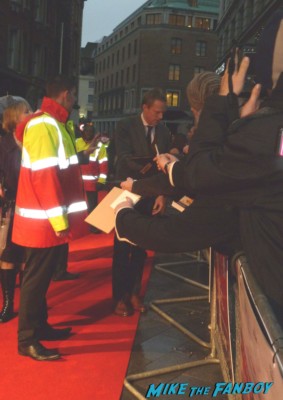 Nick Murphy (the director) and Paul Bettany’s co-star Stephen Graham are also on the red carpet now, and pose for photos; 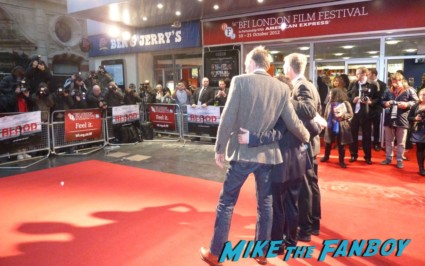 just after they finish, Paul comes over to our section! 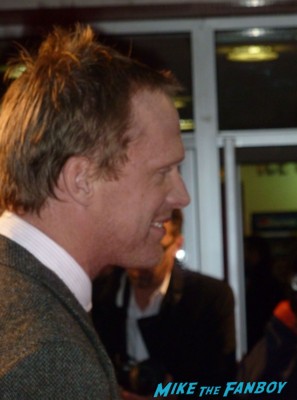 Yay! I’m leaning out over the barrier, and I’m the last person in our section that he signs for before heading off for more interviews. 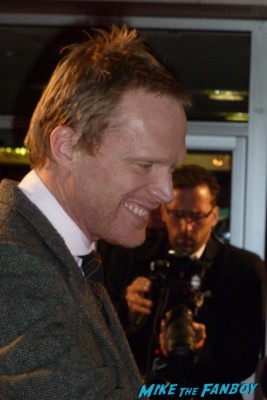 I could almost do a happy dance on the spot! I just got my autograph from Paul Bettany! Woot! 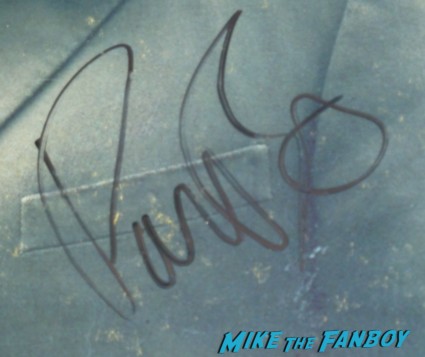 The rain is really coming down now, and after the interviews Paul returns to one chap he promised he would sign for earlier (legend!) and then heads inside. 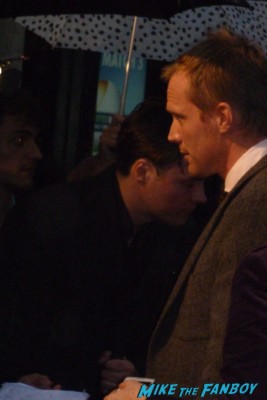 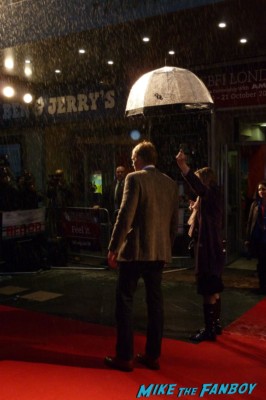 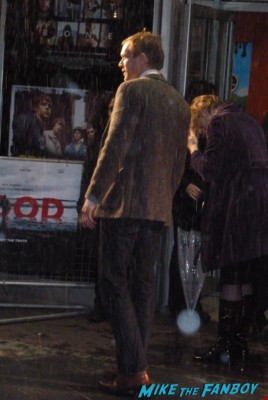 The rain is coming down hard; I’m sheltering under an umbrella, trying to keep my camera dry and get my photograph in my bag before any more rain gets on it. Stephen Graham stops and signs for us too on his way in. 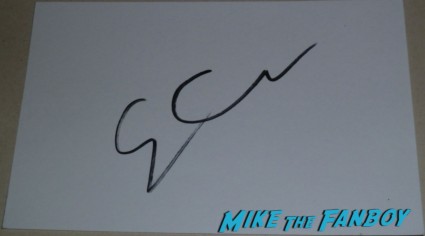 Things are quiet on the carpet now, but my night is just beginning as I’ve got a ticket to see the film too (like I said – I’ve never met a Paul Bettany film I haven’t liked!), so I escape the fan pens and am squelching my way down the red carpet to get in.

Now, I expected only to see the film, but Nick Murphy takes to the stage and gives us an introduction, inviting Paul Bettany and Stephen Graham to join him. And he announces that the screening will be followed by a Q&A with the cast. Say what?!

I’m sat in the third row from the front on the left hand side and I see the cast assume their seats after the intro – I am sat less than twenty seats and one row away from Paul Bettany to watch the film!

The film itself was really good! A cop thriller, very British in style, focussing on memories, family and the nature of masculinity rather than techniques and science. Some of the scenery was absolutely gorgeous, and the acting and story were excellent.

True to their word, after the credits rolled, Nick Murphy, Paul Bettany and Stephen Graham reascended for the promised Q&A. They took quite a few questions from the audience, and were so incredibly funny! There was lots of good-natured teasing all round – they told some great stories and had fun with the audience’s questions.   It was brilliant – so much fun!

When we left, the red carpet was still out – there were actually 4 premieres on back to back; I’d missed the second one whilst watching ‘Blood’ and the third, for ‘Robot and Frank’ was underway. I noticed a gap at the barrier, so what is a fangirl to do, but get back in there! I just missed Frank Langella, but you can’t win them all. As soon as that premiere was done, the ‘Robot and Frank’ posters were taken down again and the fourth premiere started – for ‘Spike Island’. I had fun watching the main cast take to the carpet – many of them up-and-coming actors, when I saw someone – dressed all in black with his hair pulled back into a black ponytail – Andy Serkis! He was super-nice and friendly; when we called for him he came straight over and was happy to sign and take photographs – unfortunately I didn’t get the latter as he was in conversation with someone else – but I did get a big smile! 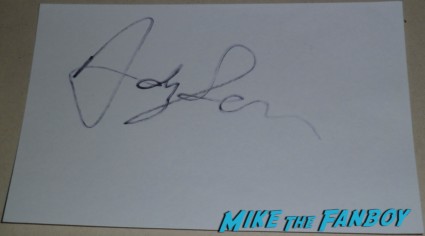 So its not even 9pm, but I’ve attended three premieres, a film screening, and and intro and Q&A, and got an autograph from the amazing Paul Bettany! Happy days! 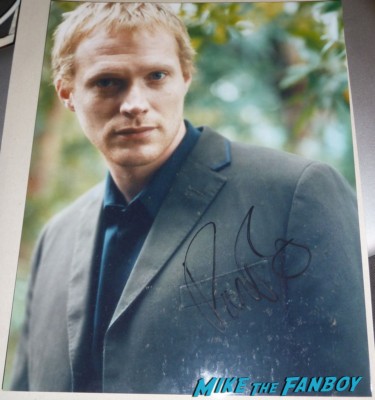