Home / Reviews • Walking Dead / The Walking Dead Season 3 Blu-Ray Review! Andrew Lincoln And Company Up The Ante On The Best Season Yet! Damn!

Left wandering around the countryside after the attack on Hershel’s farm at the end of season 2, Rick Grimes and company were looking for some more permanent shelter in season 3.

What show could I possibly be talking about… Well, if you haven’t been living under a rock… Oh yeah… The Walking Dead.

Where season 2 was a slow burn and a character study, The Walking Dead season 3 amps up the action and the pace. After a few months, our reigning and surviving heroes make their way to a large prison. This prison is their great hope, however they are soon tormented by The Governor, a man who reigns supreme over the small town Woodbury that he created.

The Walking Dead has never shied away from the blood, from the death, from the scares and from the chills of what life would actually be like if a zombie apocalypse were to take place. And did season three pull out all the stops? Hell to the yes. I would even go so far as to say that season three was the best of the series so far.

I’m not going to get into spoiler territory, let’s just say some beloved and not so beloved characters are not going to be in the main credits of season 4. This is standard for a series like The Walking Dead, and one of the reasons I love and get frustrated with it.

Andrew Lincoln is superb this season. The emotional roller coaster that Rick Grimes goes through would test the best actors and Andrew Lincoln comes out with flying colors. There is one scene in particular that will leave you stunned and Emmy voters should finally stand up and take notice. It’s magnificent.

If you’re talking about character arcs go, no one has a bigger arc than Carl Grimes, Rick’s son. This season is where Carl goes from being a boy to becoming a man. He makes some incredibly hard choices and steps in when he father is just simply unable to do so. Chandler is amazing in the role.

Fan favorite, Norman Reedus gets to reunite with his onscreen brother Merle. Their reunion, while not pulling at the heartstrings was welcomed. When talking about recurring characters, I would be remiss if I didn’t mention Morgan who made an appearance this season. Helping Rick in the pilot, Morgan was mentioned often the the beginning of the series and while not the best way to end up for any character it was a wonderful callback to where the series began.

The best addition to the series to date is definitely Michonne. Who doesn’t love a hot, machete wielding swordsman. Danai Gurira is the only person I can possibly think of that could give Michonne the bad assness that she needs.

The third series set now available on blu-ray has an awesome transfer. The colors of The Walking Dead are never vibrant which is the tone of the series, but this transfer brings out new details that you never see on the original airing. The Prison is given new dimension not just as a structure but as another character as well. The walls, the structure itself pops and the menacing foreboding that the season brings is only enhanced by the picture quality.

The special features include commentary tracks on five episodes and six deleted scenes. There is one scene featuring a zombie version of a main character that really should not have been cut.

There are eight featurettes that are must see viewing. Most featurettes are puff pieces that serve no real purpose but here the featurettes shed new light on the series and on the characters in general. Three characters get their own featurettes Carl, Michonne and The Governor. Out of these three the best is Rising Son, which charts Carl’s evolution from season 1.

Making the Dead is a featurette on the makeup used during the series, and it’s always awesome to see the creations Greg Nicotero makes come to life. Safety Behind Bars was my favorite of the featurettes. It shows how the set designers built the prison on the outside of the studio. Then they put fences up, with bricks and then there’s a prison. It really is cool to see how it all came to be.

I would highly recommend picking up the limited edition set I mentioned earlier which was designed by McFarlane Toys. It’s really damn cool.

Overall, The Walking Dead season 3 is a must own, it’s an amazing entry into the series and is one of the most riveting series on television today.

The Walking Dead season 3 is out now on DVD and Blu-Ray! 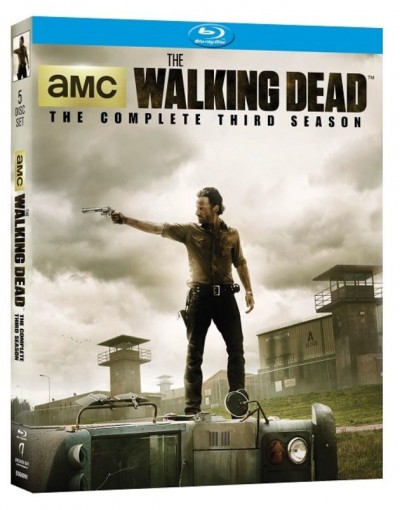