You know, there are those times when you go out and try not to expect much. Even though you say to yourself, don’t put too much stock into something… You inevitably do. Today is the world movie premiere for The Watch. I’m heading out even though the bane of my existence, AKA Jonah Hill is here. I really want Ben Stiller and Vince Vaughn, as I have never met either one of them and Dodgeball is one of my favorites.

So, here I am… trying my luck!

5:01 p.m. – I just arrived, Billy Beer and CB are already here and we have a pretty good spot, so you never know!

5:23 p.m. – They’ve set up the red carpet with a giant black monolith so once the “celebrities” go past that, it’s all over. Ah well… I’ve brought my Dodgeball, Meet the Parents, Mystery Men, Old School, and yes The Watch mini posters. LOL… I also have 21 Jumpstreet and Get Him To The Greek for Jonah Hill. It kills me that I have things for that man to sign but what can you do right.

5:29 p.m. – The posters they put up are even falling down. Wow… This is not the highest quality premiere in the world. 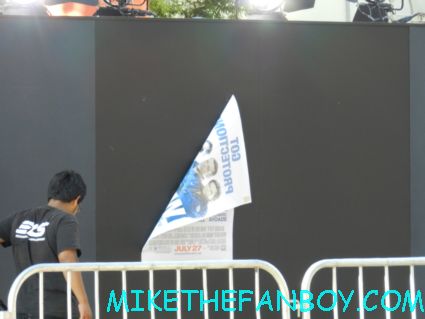 5:34 p.m. – There are not that many people here, I mean there are some but not as many as I expected. 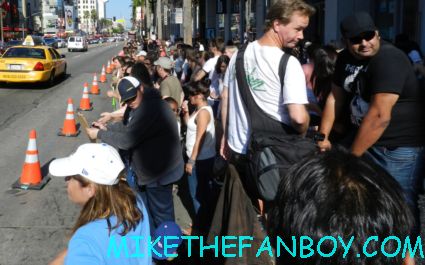 5:39 p.m. – Billy has gotten some sun! Damn… That’s one thing, make sure you bring sunscreen at events like this!

5:54 p.m. – The sun is sort of going down. I was totally getting made fun of today for going to anything related to Jonah Hill. You see, I don’t like him. In fact… I would say he’s my celebrity nemesis. I can’t stand him. 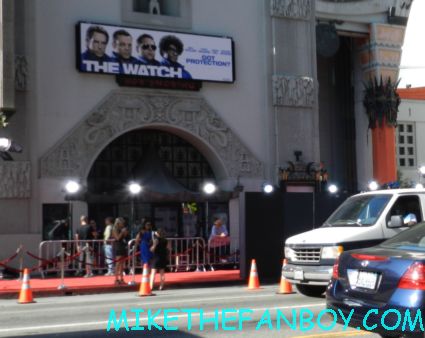 6:11 p.m. – Billy has made a new friend. And again my memory for names is horrendous much like Jonah Hill was in The Sitter. Anyway, I think her name is Elizabeth from Vermont. This is her first premiere and she’s very sweet.

6:23 p.m. – Oh an arrival! It’s Richard Ayoade. Everyone yells out for him and he ignores everyone and just walks on the carpet. Damn. 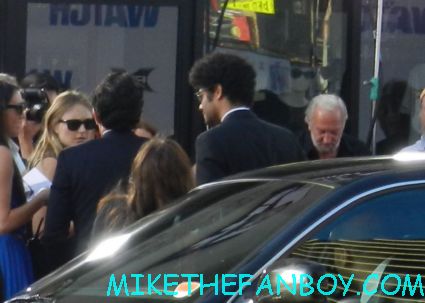 6:41 p.m. – There’s Doug Jones. He waves at everyone. Doug was the silver surfer, he was in Buffy, and a bunch of other stuff. 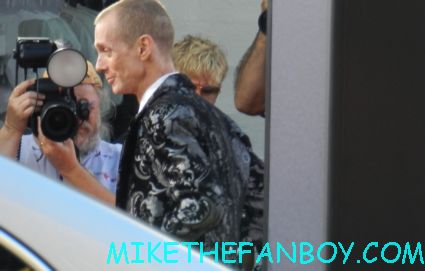 6:54 p.m. – People are calling out for someone… It’s Akiva Schaffer. He is the director of the film. He was also one of the writers of SNL. l 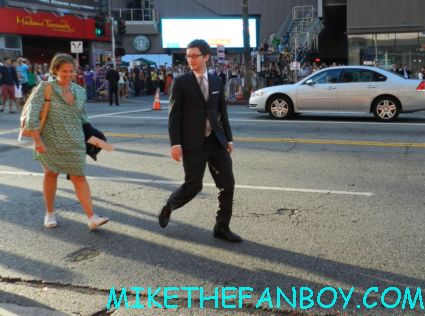 6:56 p.m. – Akiva Schaffer is hyper nice and signs for anyone who asks. I got him on my The Watch promo “limited edition” mini poster from comic con. 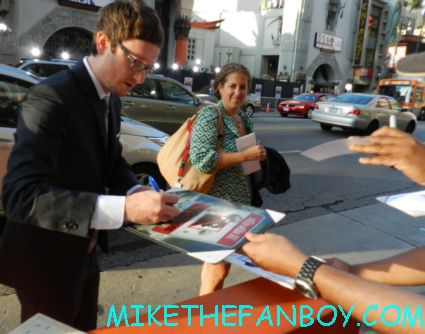 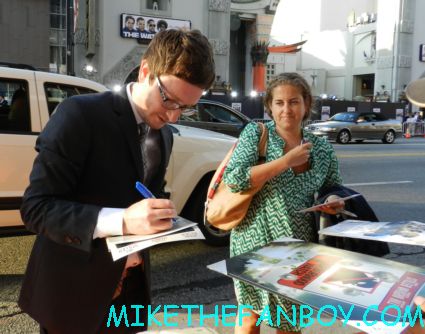 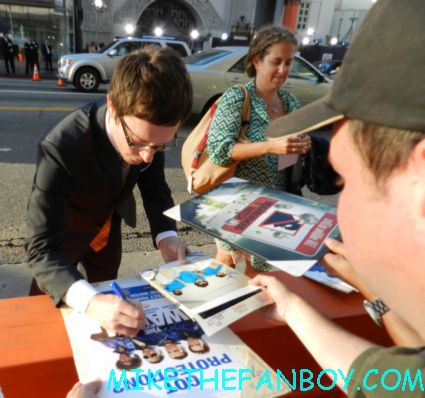 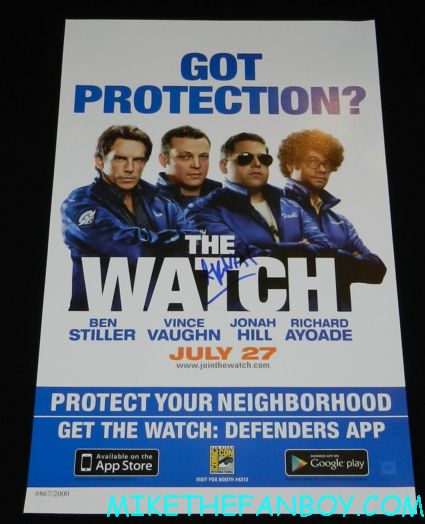 7:04 p.m. – Oh and speak of my nemesis… It’s Jonah Hill. He walks over to the people on the side near the theatre and takes a few photos and then walks across the street. 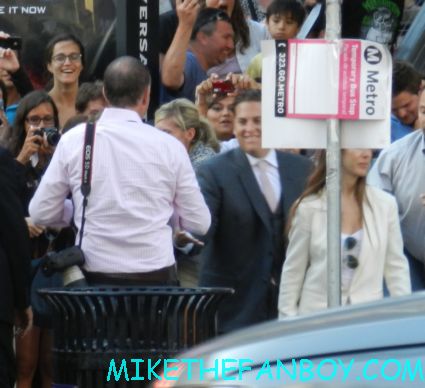 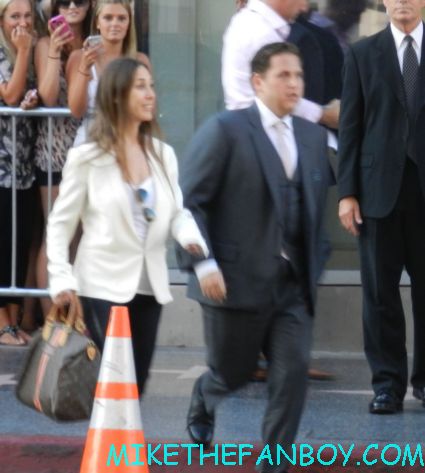 7:06 p.m. – Jonah… I’m sorry… Academy Award Nominee Jonah Hill, signs about six autographs for people who only have ripped up pieces of paper or randomness… Heaven forbid you have a mini poster, photo or something. If you do, he looks at you with a plastered smile, and walks past. What a douche. 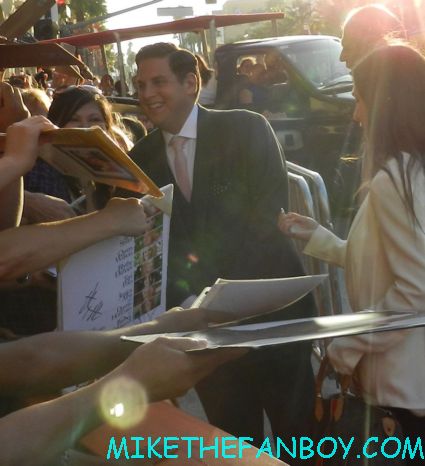 I have to tell you for someone so untalented it’s amazing he’s not nicer to his “fans.” Not me of course, I am not a fan but there are people here who are genuinely fans. One girl even started crying when Jonah ignored her. 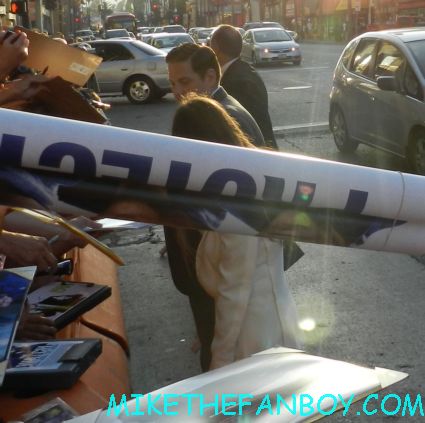 Now, I can judge all I want but if you’re a fan and the person you like disses you it leaves a bad taste in your mouth. Even for a walking toadstool like Jonah Hill. 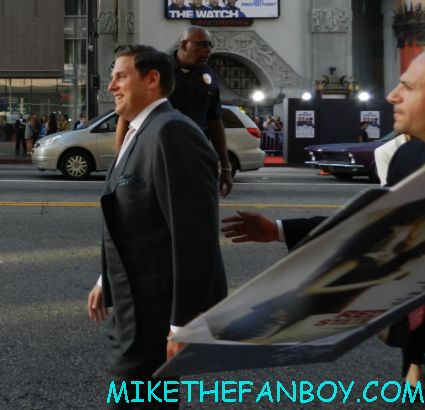 7:09 p.m. – Did I mention he ignored practically everyone? Oh, and he was in such a hurry he stood at the end of the red carpet for about 10 minutes before he went on. He’s so gross. Like a walking chia 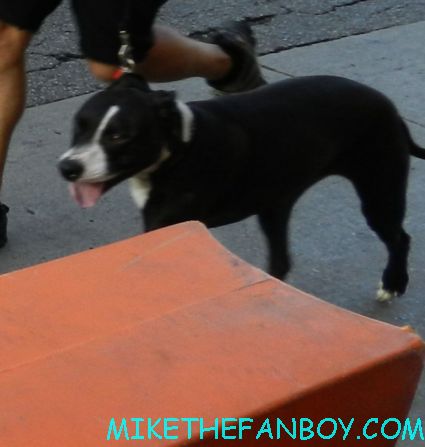 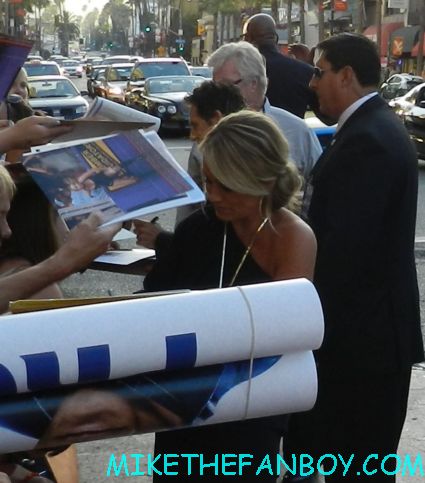 I could get Christine on my Dodgeball mini poster but then I have to get Joel Davie Murray, Justin Long, Alan Tudyk, and more… So, I’m choosing to just keep it to Ben Stiller and Vince Vaughn. 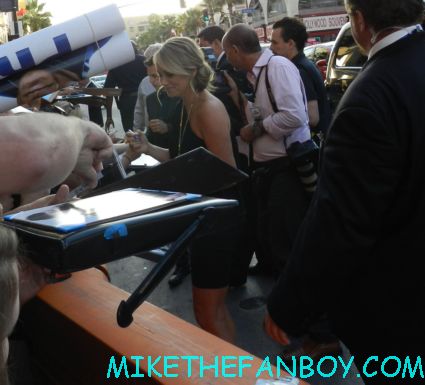 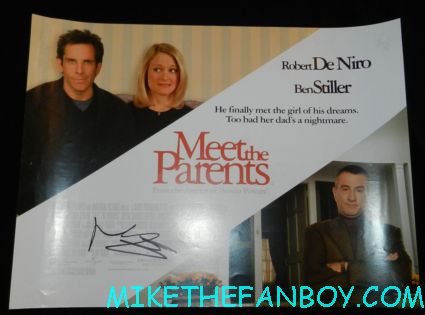 Then I see Vince Vaughn! He arrived and then crossed the street and says, “I’ll come back.” He then walks down the line and waves at people. Shit! 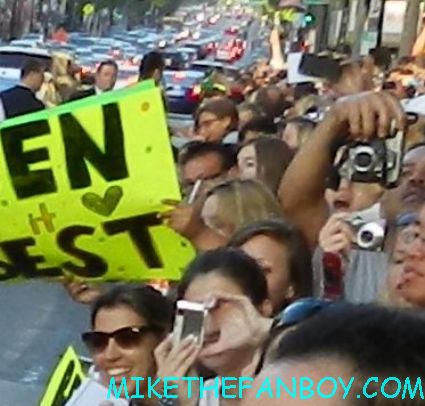 Ben Stiller then signs my Mystery Men UK Quad mini poster and heads back down the line. 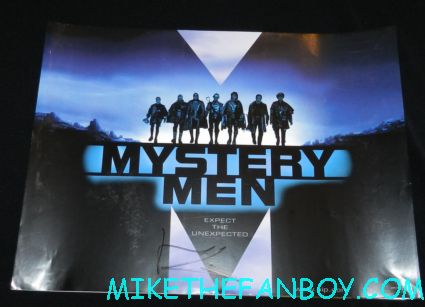 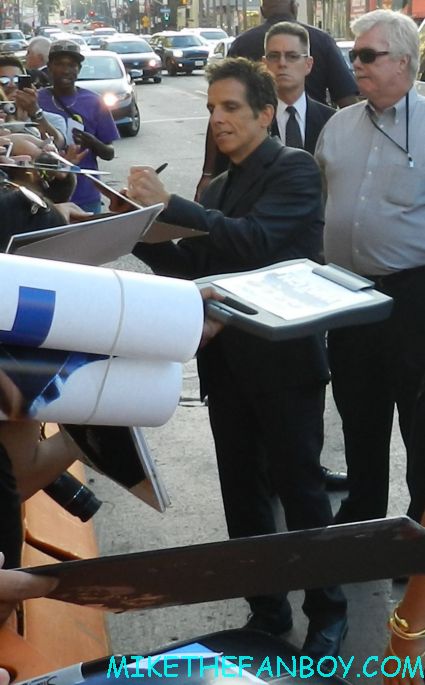 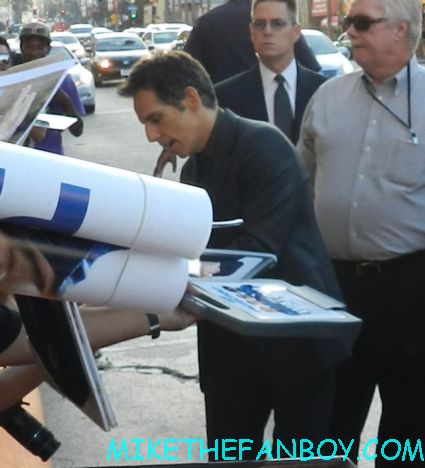 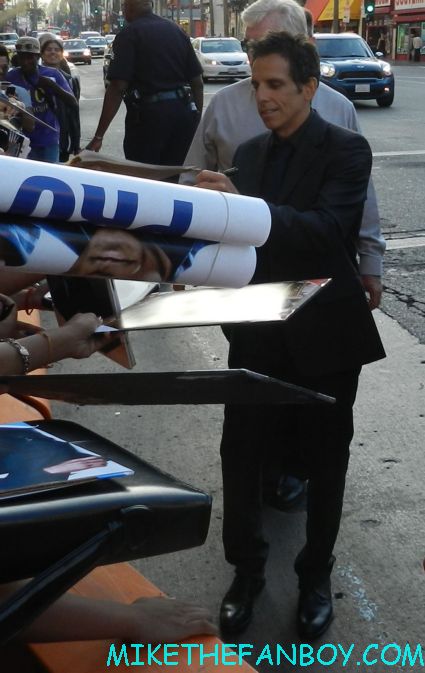 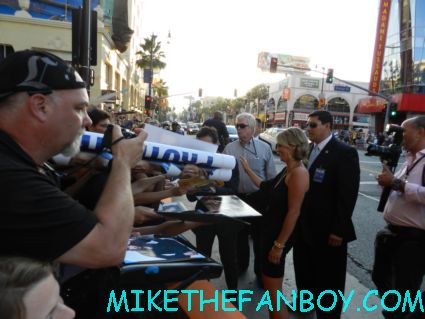 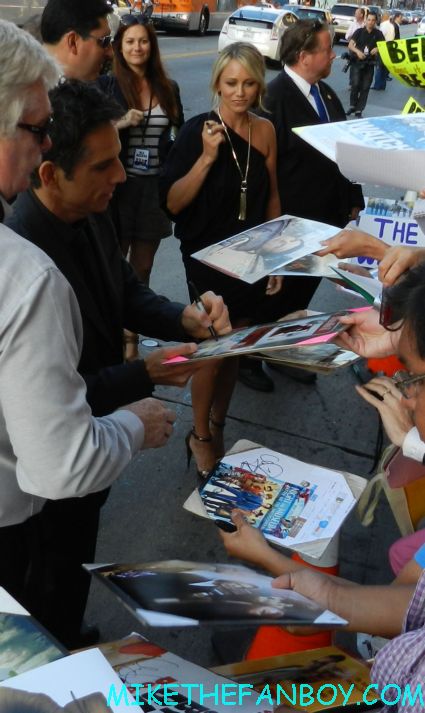 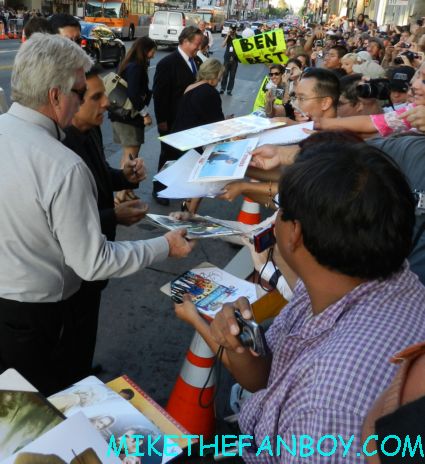 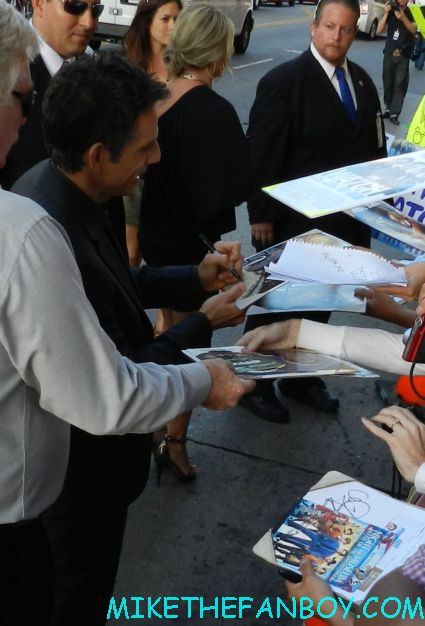 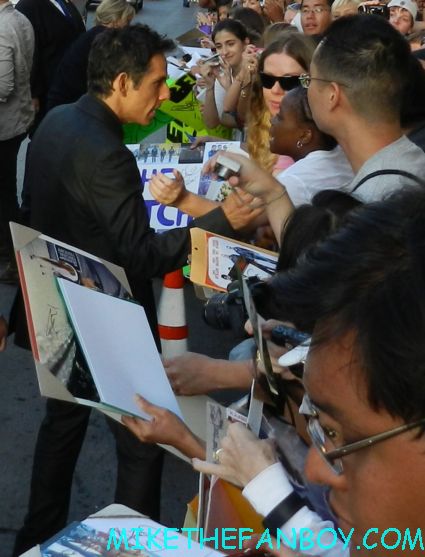 I have to tell you, I’m glad I got Ben but honestly not really worth it. Plus, some small part of me hates the fact that I gave Jonah Hill an ounce of fandom does hurt my soul. To the very heart of my being. Grumble… Well, you can’t win them all right? Let’s cross our fingers for the next outing! 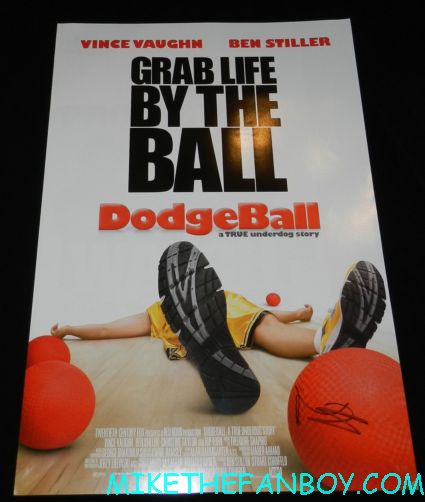