In honor of Leonardo DiCaprio’s long deserved best actor nomination, I thought I would share James’ recap of the Wolf of Wall Street Premiere from over the pond!

I’m telling you, things just seem so much calmer there. lol… He got an awesome photo with Leonardo DiCaprio! Margot Robbie and again Jonah Hill was a douche.

Hey… Maybe things are the same over there like they are here! LOL.. 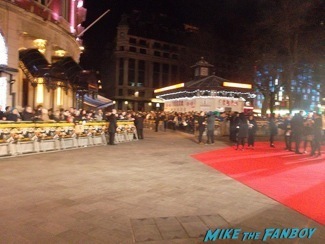 So, the new year is here and there wasn’t too long to wait for the first premiere of the year. Just as the first premiere of 2013 was rather promising (Django Unchained), 2014 was much the same, this time the UK premiere of The Wolf of Wall Street. With cast members Leonardo DiCaprio, Jonah Hill & Margot Robbie due to attend, it promised to be a fun evening. I’m too tired to write all the pre-arrival details, so I’ll cut straight to the action. 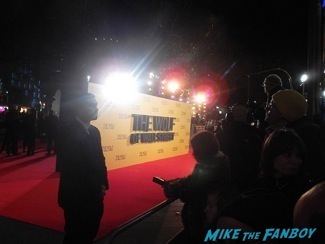 First to arrive was Jonah Hill, star of films including Superbad, Get Him to the Greek, 21 Jump Street and Moneyball. Jonah got out of the car, looked to see there was a camera filming him, signed maybe 4 or 5 then walked off to deal with the press. Umm, okay? I met him at the BAFTAs in 2012 and he seemed so disinterested in signing then that I wasn’t too surprised. Back then he stood as far away as he possibly could whilst signing, holding the pen as if it was diseased. I’d heard some not-great stories about Jonah in the past, but this seemed a bit bizarre. It turns out he’s not been too bad this trip (he signed a few more further down the carpet, and earlier in the day for people at his hotel and whilst doing some radio promotion), but I was kinda gutted to not get him here. Ah well.

Margot Robbie arrived soon after, and after posing for the photographers came over to sign, and was lovely. I got an index card signed and also a photo with her. Whilst she now may be an upcoming Hollywood star after her roles in this, About Time and the upcoming Focus, she’ll always be Donna from Neighbours to me. I used to have a soft spot for her back when she was in Neighbours, and may have told her that yesterday. Whoops. Anyways, happy James! 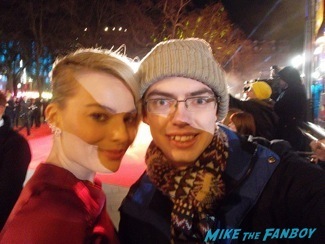 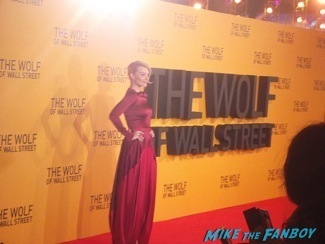 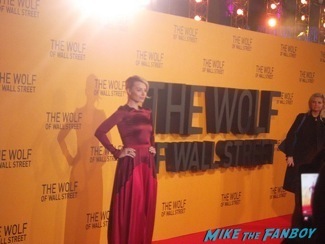 Margot was followed by the person nearly everyone was waiting for, Leonardo DiCaprio. The star of Titanic, Inception, The Great Gatsby, Romeo & Juliet, Django Unchained, The Departed, The Aviator, Blood Diamond & J. Edgar didn’t disappoint people, and must’ve signed for pretty much everyone there. His autograph may be nothing to look at, but at least he made an effort to see as many fans as he could. I got my autograph book signed, and also managed to get a photo with him, which I’m VERY happy with how it came out! I did have a Titanic photo with me already signed by Kate Winslet, but I decided to leave it just signed by her since she’s got such a nice signature compared to his. Still, happy James! 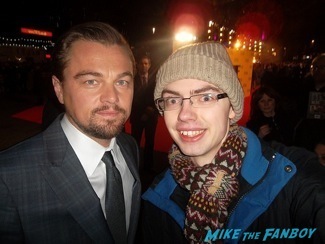 Then came the random celebrity spotting. Former Coronation Street actor Ray Fearonsigned an index card for me, as did former Aston Villa & West Ham footballer John Carew. Magician Dynamo posed for a photo with me, which he took himself! 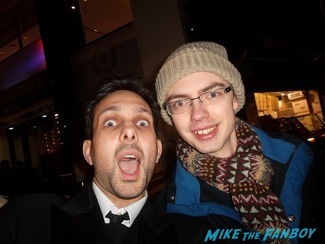 Also met Kasabian guitarist Serge Pizzorno, who signed an index card and posed for a photo with me. 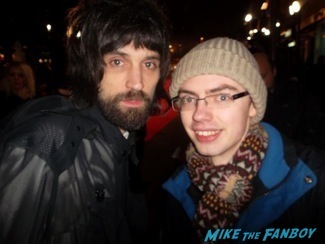 and that was that, a fun evening with some good friends, and a belting photo with Leonardo DiCaprio. Can’t ask for much more than that really! Here’s hoping the rest of 2014 is as good!

And don’t forget to check out James’ site here for more UK scoop!