OMG! I have to tell you, this looks amazing! It’s a great special edition of The Wonder Years! How awesome is this packaging? Seriously, it’s so well done!

I can’t tell you how excited I am for this release, Starvista who did the amazing China Beach set I’ve talked about did this one for the Wonder Years.

Man… I never thought this day would happen. 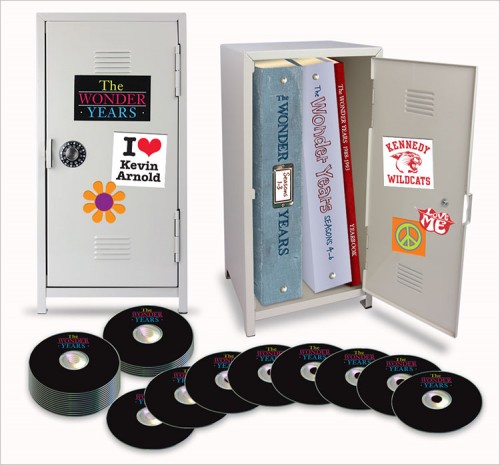 The Limited Edition 26-DVD Set Will Be Housed in a Replica Kennedy Junior High School Locker and Include a Specially-Designed Yearbook, Custom Wonder Years Magnets, Cast and Crew Liner Notes and Much More!

FAIRFAX, VA – The Internet is atwitter followingthe recentcast reunion shoot for THE WONDER YEARS COMPLETE SERIES, as stars Fred Savage, Danica McKellar and Jason Hervey all tweeted out behind-the-scenes photos.  Lifting back the veil of secrecy from the filming of cast interviews, the photos ratcheted up the excitement level for the multitude of fans who’ve been eagerly awaiting the release of the beloved, award-winning series – the most requested TV series never to be released to DVD.

While THE WONDER YEARS DVD sets aren’t yet available, to further pique fan interest, StarVista Entertainment/Time Life is unveiling packaging details of THE WONDER YEARS COMPLETE SERIES: the 26-disc set will be housed in a limited-edition metal locker – just like those featured at Kennedy Junior High School — complete with colorful “Wonder Years” magnets to custom-design each locker.  Inside will be two notebooks like those carried by Kevin and Winnie, each featuring detailed episode information and production photos.  There will also be a replica yearbook embellished with signatures from cast members, behind-the-scenes photos and classic show memorabilia.  Finally, liner notes from Fred Savage, series creators Neal Marlens and Carol Black and executive producer Bob Brush completes this impressive, unique set, certain to be a fixture in the homes of many a fan.

“We’ve worked long and hard to creatively package the show in a way that will resonate with Wonder Years fans, and I think we’ve done that with this complete series set,” says Jeffrey Peisch, the Senior Vice President, Entertainment Programming & Marketing for StarVista Entertainment/Time Life.  “The Kennedy Junior High locker was an important element of the series, and it really taps into a very nostalgic vein for many of us”.

Routinely praised for high-quality TV DVD collections, an archivist’s attention to detail, and specially produced bonus programming on releases such as Get Smart, The Carol Burnett Show and China Beach, StarVista Entertainment/ Time Life will release THE WONDER YEARS in several different configurations in the third quarter of this year.  Fans seeking additional information can also visit WonderYearsDVDs.com,the official site for all updates, exclusive content and pre-orders.

The Wonder Years was created by Neal Marlens and Carol Black in association with New World Television, which was acquired in 1997 by 21st Century Fox (then News Corporation), the parent company of Twentieth Century Fox Television.