Home / Reviews / The Wonder Years: The Complete Series DVD Review! The Iconic Series Is Out Now In One Of The Best Series Sets EVER!

The Wonder Years is one of the best series to ever be aired. That’s a big statement, I know but I defy anyone to argue that point with me. There are few television shows that stand the test of time, but The Wonder Years has done just that. It’s a slice of life series that anyone who has ever gone through adolescence can relate to. In a word, it was groundbreaking television.

Now, The Wonder Years: The Complete Series is out on DVD in a wonderful 26 disc set. Brought to you by Time Life, the folks who put out the amazing China Beach DVD set a couple years ago, I’m happy to report that the same care and attention to detail has been put into The Wonder Years set as well.

Set during the lated 1960’s (and continuing into the early 1970’s) The Wonder Years follows Kevin Arnold (Fred Savage), everyone’s younger brother who is balancing his life at school and his ever changing family life. Kevin’s mother Norma (Ally Mills) the quintessential parent that anyone would love to have, Jack (Dan Lauria) Kevin’s father who focuses on his career as his way of taking care of his family, Wayne (Jason Hervey) Kevin’s older brother who has figured out a hundred different ways of calling him “Butthead” and Karen (Olivia d’Abo) his hippy flower child loving older sister make up the archetypes in Kevin’s life. 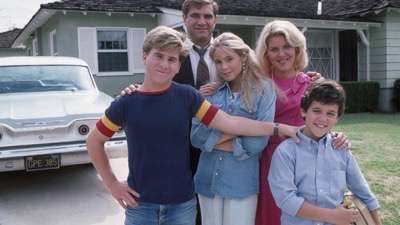 Combine that with Paul (Josh Saviano) Kevin’s best friend and Kevin’s friend, crush and on-again-off-again girlfriend Winnie Cooper (Danica McKellar), and you have the ingredients for classic television. Throughout the series Kevin struggles with understanding his father, relating to his mother, and navigating the difficult world of high school.

The thing that separates The Wonder Years from other series of its time, is that each character has their own life. They are not just placeholders for Kevin to interact with. When Norma isn’t onscreen you quite honestly can picture her going about her day even though you never see it. The life that these characters have can only be attributed to top notch high quality writing and acting. 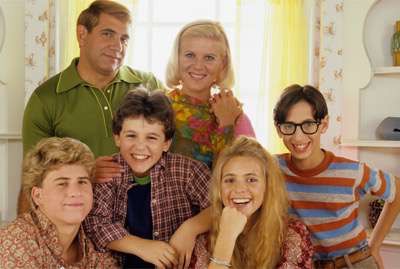 Fred Savage was one of the best child actors of all time. He brought a heart, and relatabilty to Kevin Arnold. The key to his performance really lies in the fact that he and the writers didn’t try to make Kevin perfect. He messed up, he did some kind of crappy things, in a word, he was a normal kid. He was just like any of us, flawed and imperfect but attempting to do the right thing. That was really the key to the series, and other classic shows, presenting characters as flawed, real people. They never tried to make Kevin everyone’s hero. He was a typical kid.

The rest of the cast was equally excellent. Danica McKellar as Winnie Cooper brought an etherial quality to her role, just like the girl every boy crushed on. She was a part of their lives but lived on an untouchable plane all the same. Jason Hervey as Wayne was equally menacing and… okay, he was just a jerk, however in the final season you can really see Wayne’s humanity come out when he takes over the family business and grows up. Jason Hervey does a phenomenal job. 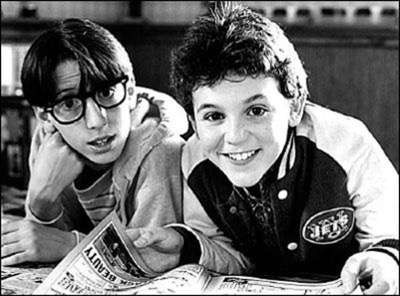 One thing that was vital to the series was the voice over narration by Daniel Stern as the older and wiser Kevin Arnold. While normally, I hate voice over, but here the soothing and trusting voice of Daniel Stern added a level of depth and understanding. The voice over in general led the audience get absorbed into Kevin’s world as he looked back on his youth. It really helped add a different dimension to the show.

The Wonder Years was arguably strongest during it’s earliest seasons where Kevin struggled to fit in with school, and his family. He went through situations that everyone of us did and that’s what made the series so amazing. 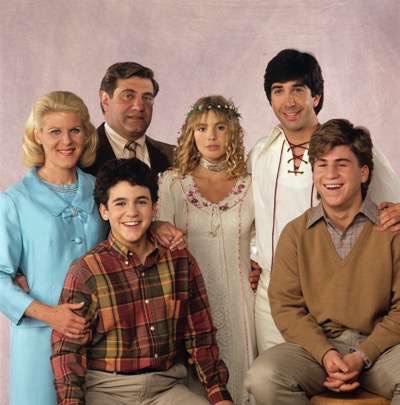 The Wonder Years has been so high anticipated I was wondering how the picture quality would be and how much of the original music would be available on the DVD Set.

The series was shot in 16 mm film, which sadly hasn’t aged all that well. However, the 16 mm film doesn’t distract from the series at all on this transfer. I think a lot of it has to do with the fact that the series was produced as a quasi-documentary so the film stock doesn’t detract as much here as it would in other shows. 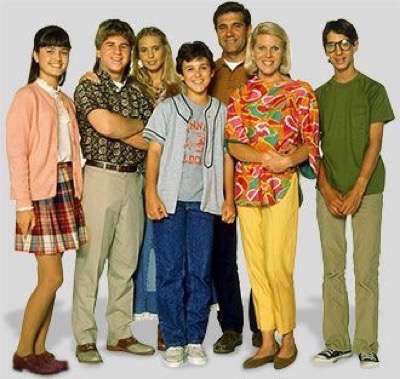 The thing to note, is don’t expect high definition Blu-ray quality video. It’s the best you can get for a lot of shows of this era and Time Life has clearly done the very best they could do for the series.

When it comes to The Wonder Years, one of the things that has defined the series is the music. I’m so excited to report that 96% of the music has been restored for the release. The songs that couldn’t be licensed have been replaced as best that they could. Time Life went through the painstaking and meticulous process of getting the licensing right, and it’s nearly a miracle that The Wonder Years has made it’s way onto DVD.

Can I just tell you how amazing this series set is? I HAD to take photos of the packaging. There have been some over the top awesome collector’s sets out there but I think this one is my favorite.

First off, it comes in a metal mini locker with a set of magnets you can stick on the front and remove. 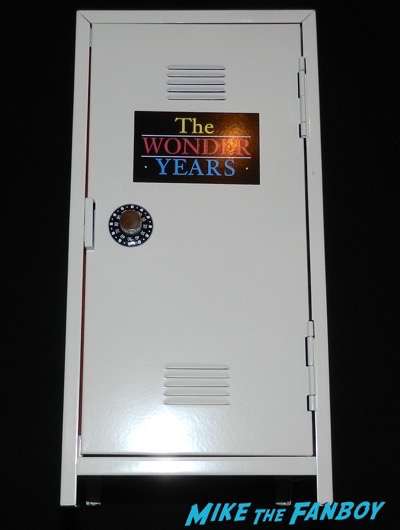 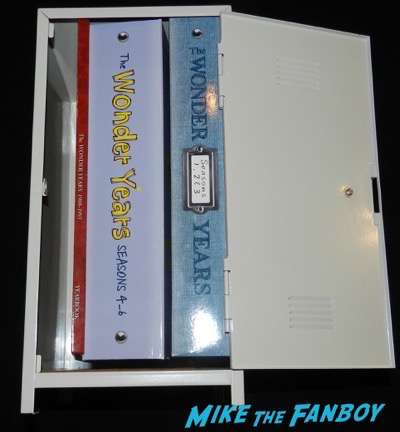 If that wasn’t cool enough, there is a yearbook included with never before seen behind the scenes photos, and a spotlight on each of the main actors. 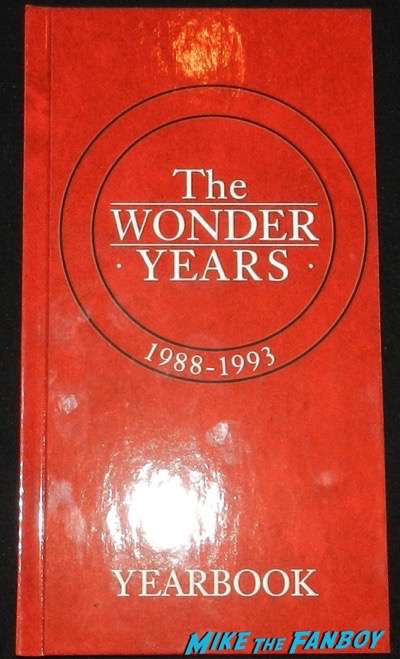 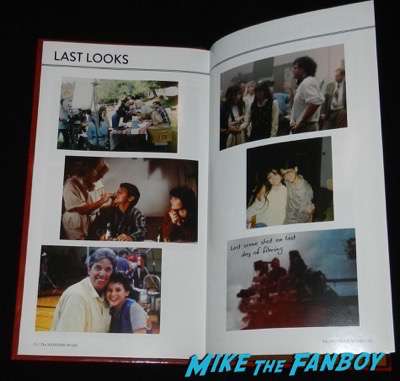 If you look at the yearbook, you can see that the actors have all signed the booklet and it’s reproduced here. That’s the kind of care that’s been put into this edition. 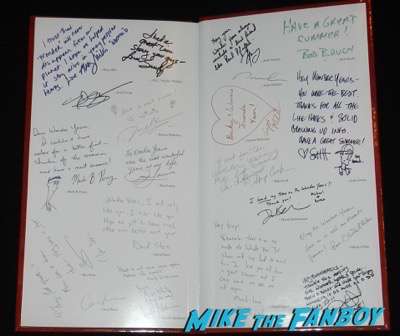 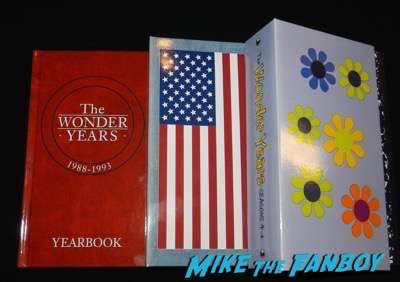 The special features on this set are out of this world. They include featurettes on the cast reunion, and a separate reunion highlight spent on the Arnold family kitchen set. There are interviews with The creators and their favorite episodes, and each actor is given time to discuss their favorite episodes as well. 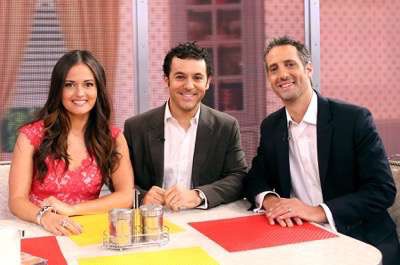 There is a roundtable special with Danica McKellar, Fred Savage and Danica McKeller. They talk about their real lives and growing up on set.

There is another featurette called The Times They Are A-Changin’ that discusses the time period the series takes place in and the social implications of the overall series.

There are outtakes from the pilot episode and can I tell you, the full cast reunion is a must watch. Just seeing the full cast together again is a site to behold. It’s just cool to see.

There is a featurette When a Man Loves a Woman: Kevin & Winnie Forever that talks about Kevin and Winnie’s relationship over the years.

There’s even a featurette titled ABC: Teachers That Made a Difference that brings back all the teachers from the series. That’s how much detail has been put into this edition. 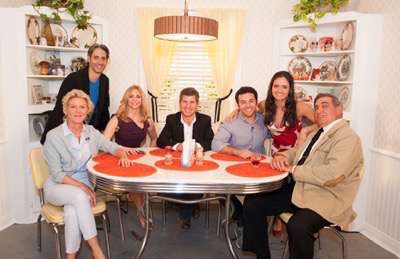 There are interviews with Robert Picardo, Ben Stein, Wendel Meldrum, I mean the bonus features go on and on. It will take weeks to watch them all.

One of my favorite featurettes is That’s A Wrap! Mark B. Perry’s Farewell Set Tour Season Five. It’s a tour of the filming sets on the last day. As a film location buff, it was cool to see.

As a side note, I was able to visit the houses in the series and I’m so happy that they still look remarkably the same to this day. 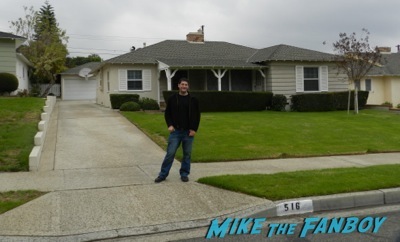 There are even two versions of the finale, the syndicated two part episode and the original one hour broadcast version. Talk about care.

Overall, clearly I’m a fan of the series. If you have never seen The Wonder Years, I think you should stop what you’re doing and watch it now. Seriously, just stop everything. If you know a fan or someone who would love the show, this is the perfect Christmas and/or holiday present. I mean I know the reaction I had when opening up the packaging and going through everything and I don’t think a smile left my face for 72 hours. 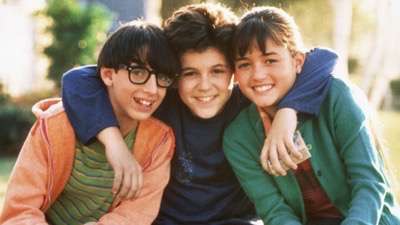 The Wonder Years: The Complete Series is out now on DVD!