Comic Con 2013 is over… And let me tell you, it was one for the books. First and foremost, I want to extend a huge and awesome thank you to Ace and Scotty The Music Man for holding down the fort. There was just simply no way for me to keep up with everything and even though I half (or three fourths depending on who you talk to) expected to come back with the site in shambles I’m happy to report that it’s in one piece!

In all seriousness, I’m very thankful to the guys for holding it all down. You guys rock.

Comic Con 2013 was a blast! There’s no way to tackle something as gigantic as SDCC without awesome friends! Huge shout out’s to Billy Beer, The Lovely Erica (plus her sisters!), Suddenly Susan, The Novel Strumpet, The Other Mike, and it was great running into Russell, The Wisconsin boys, and all the awesome people I was fortunate enough to meet!

So, on with the show!

Even though I’m literally recovering from SDCC 2013, and when I say recovering, I’m talking popping more than a few Aleve, I wanted to start sharing from the awesomeness of Comic Con!

What I decided to do this year is, in addition to my normal daily recaps also focusing on specific events that I really felt like stood out to me.

One event at the top of my list was The World’s End premiere. Now, things this year at SDCC were a little more shut down than in the past, however, I was able to run into this one fairly easily.

I have loved Simon Pegg, Nick Frost and Edgar Wright for a while now. When they team up, cinematic magic happens. Shaun of the Dead is one of my favorite films and I love Hot Fuzz as well.

Erica and I were going to get food and then decided to do a scouting mission. Food went out the window and thankfully I brought my stash of crap with me. I’ve been wanting to get my Shaun of the Dead cricket bat signed forever, I have a spot picked out on my wall, I’m just waiting for it to be signed so it can go up.

The premiere wasn’t like the typical Hollywood ones but more low key. There was a red rope, not a barricade and I looked over and saw Simon Pegg and Nick Frost on the carpet. They were doing interviews and honestly, I wasn’t sure if they would come over. There were only a few fans waiting and it wasn’t on the street so who knows. 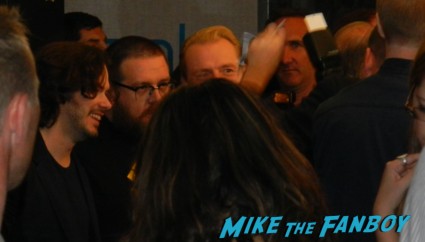 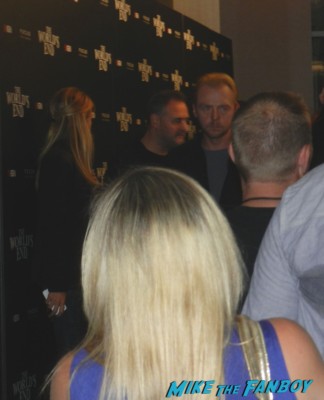 Nick was finished first but went back on the carpet to do interviews. We couldn’t really yell since it was an inside premiere so we waited. Simon looked over and waved at everyone from the carpet and then did a couple more interviews. 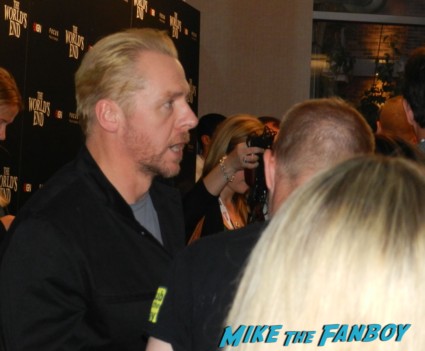 His publicist then came over and said, “Only one each guys” right before Simon came over. Simon was so nice and signed away. I had all my Star Trek items with me, but honestly this was the case of “I would rather get one nice thing done than get three autographs.” I asked Simon to write “Fuck-a-doodle-do!” on the cricket bat which I think in my comic con haze I called a lacrosse stick. Duh… I was nervous. Simon was super cool and was happy to sign it and yes he wrote what I asked for without a problem.

Then Nick Frost came over and said he would sign it on the back, I was like no! On the front! He said that Simon took up too much room on the front! LOL… But he was happy to do it, he just wanted to make sure it would fit on there!

I was pretty damn happy and it capped off my Thursday night pretty well! 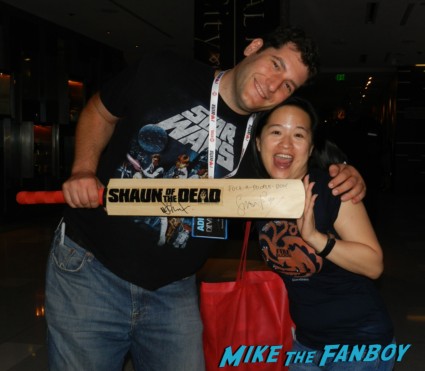 We will have lots of SDCC updates coming! Trust me!