Anyway, I have a sad little fable to tell today. It’s the story about The End of the World… Or The World’s End to be exact.

The other night Jack and I headed out to a screening of The World’s End the new Simon Pegg and Nick Frost team up.

Jack and I had a well deserved drink and then watched the film. I have to tell you, I’ve loved all the Simon Pegg and Nick Frost team ups. They have an amazing chemistry and this film is no exception. If you haven’t had a chance to check it out, you should do so. 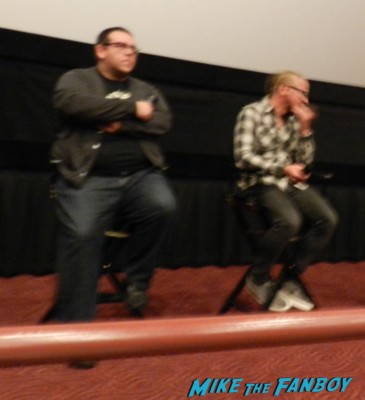 After the film Nick Frost, Simon Pegg and Edgar Wright were participating in a Q and A. All seemed to be in great spirits and the q and a was great. Simon Pegg talked about his bromance with Nick and Edgar. 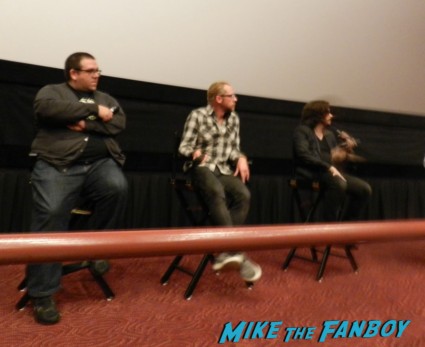 They all said that they would like to do another movie together but that they wanted closure on this group of films. 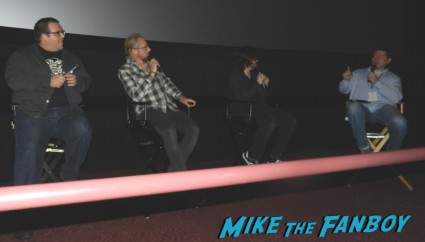 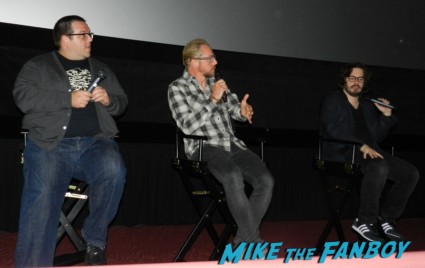 After the q and a ended all three got up. Jack and I were right in the front and there was a barricade right there so no one could even rush them.

Nick Frost bolted like his pants were on fire, Jack and I yelled for Simon Pegg and he looked at us and said, “Sorry guys, they won’t let me stop.”

And that as we shall say is that. The odd thing is… They all signed in the parking structure for the few people that were there.

Personally, I think that it was security who told them to not stop. It’s not like we were the only ones there that had something to get signed, a lot of other people had stuff, it’s a q and a. It just never ceases to amaze me when people don’t sign for people who paid to see the film and then do it for people waiting outside. And trust me, I’m on the receiving end a lot of times, and I still don’t get it.

Plus, the security guard here was a total douche, I’m sure a lot of people in LA know what I’m talking about. He looks like a meth dealer from Lancaster (not that there’s anything wrong with Lancaster) who can barely spell GED so honestly what do I expect but still. It’s irritating.

I think it’s more irritating when stars listen to these high school dropouts in cheap suits they got at the fashion district like they have any power. Ugh… Sorry, I didn’t mean to rant there, but the truth is the truth….

The most ironic moment of the night. Edgar Wright told the audience, “Come see the movie again! This Weekend and Bring Another Friend!” I’m like… Ugh… No. Take 30 seconds out and sign some stuff and you’ve made me an even bigger fan.

I’m going to have a cold one and play with Theo!