OMG IT’S ALREADY HALF WAY OVER

I felt like I needed to wear a frilly dress and eat peeps there were so many Easter Eggs in this episode and how could you not love them all?

But lets talk my feelz on the episode first:

Mulder and Scully Meet the Were-Monster (10×3):

I spent the first few moments thinking “Man they are really dialing it in this episode” and then I started to realize this was one huge love fest to over-the-top B Horror Movies and Monster of the Week features. Once I realized what was going on I settled in for the laughs. And there were quite a few of them. 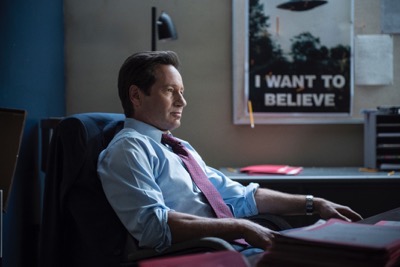 Mulder trying to use a smartphone photo app. Scully making out with some guy in the back of a mobile phone store. Peeping Tom’s cabin. Quippy little lines like “Mulder, the internet isn’t good for you.” Scully ‘s pants…ok that might not have been intentional, but her pants when they’re out in the woods looked like they were way too long. I’m a shorty, so I pick up on these things.

The dialogue, the acting, the camera shots, they made for one wacky and fun episode. Ok, so some things were a little odd and I had some “Twin Peaks” moments, but overall it was enjoyable. 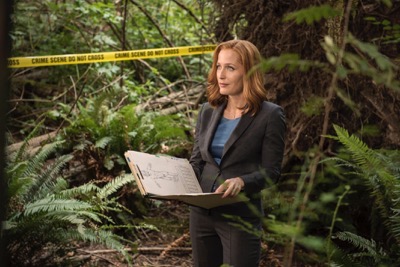 I know some might have felt the social commentary was a little heavy handed but I didn’t mind it so much. I appreciated how disenchanted Mulder was at the beginning, and I loved him repeating he was a ‘middle aged man’ and Scully just stared at. Most people would say things like ‘oh you’re not that old’ or ‘but you look great’ or something like that. Nope, not Scully, she just stared at Mulder like ‘yeah, you are’…LOL…priceless. 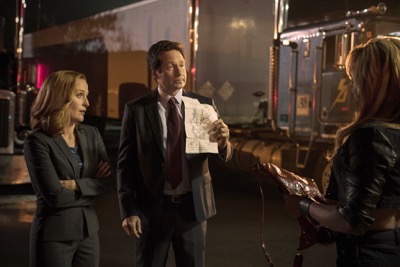 But how can we talk about this episode without talking about the Easter Eggs? I know I didn’t catch them all and I’ve purposefully avoided reading any other commentaries until I watch it again to see if I catch more, but here are the ones I noticed in no particular order:

1) Mulder’s Red Speedo: Oh how we all remember that moment when Krycek walked into that pool area and there’s Mulder in all his red speedo, swimming glory! Sorry John Watson fans out there – Mulder was the original “Red Pants” ;P
2) Daggoo: Queequag, you stole our hearts but now Scully might have a new friend, Dagoo. What is it about Moby Dick that makes the X-Files want to keep naming little dogs after the characters? I’m putting good vibes out there for you pup…the last one didn’t have fare so well.
3) Scully’s Immortality: In “Clyde Bruckman’s Final Respose” (3×4) we may have learned how Mulder and Scully will die so I liked the moment when she declared herself immortal since Clyde basically told her she doesn’t die. Someone said they referred to Mulder’s passing, too, but I don’t remember seeing anything that smacked of homoerotic asphyxiation. Maybe in the next watching 😉
4) Mulder’s ring tone: This one was a little over the top, but you gotta love them breaking down that 4th wall just a tad…
5) The Pencils and Poster: So watching Mulder toss pencils was great (although I miss them sailing up into the ceiling) but Scully getting upset because Mulder was tossing them at her poster was kind of hysterically awesome. I wondered where it had come from since Mulder ripped the other one in episode 10×1. Then again, you have to wonder where did Scully get hers?
6) The Tombstones: Ok, X-Files, why don’t you just rip out my feelings and stomp all over them. I had a moment when I saw that Kim Manners tombstone where I started to giggle until it hit me that Manners died a few years back. Then you shift over and there’s Jack Hardy who worked on a couple of other Chris Carter projects who also passed. And then the inscriptions like Manner’s “Let’s Kick It In the Ass”…BREAK MY HEART!!!! 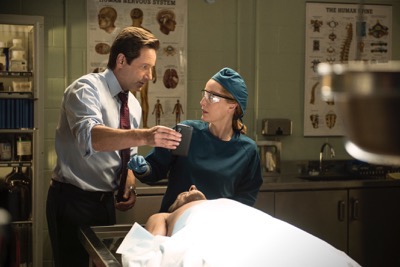 There were some great moments between them and the most touching was that moment when Scully said she kind of missed cases like this, but then again she could’ve just meant working with Mulder and how, for a moment, there wasn’t all that past standing between them. You could feel their connection in that moment. AGAIN RIP MY HEART OUT! 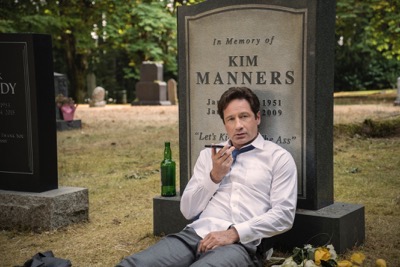 Did you guys notice any other Easter Eggs? Did you enjoy the ‘monster of the week’ vibe?