Restore the joy of your salvation and remember nerves are not a sin. “Them That Follow” is a deeply disturbing, haunting drama showcasing Walton Goggins in an unbelievable and unforgettable performance.

Pastor Lemuel Childs (Goggins) is a snake-handling pastor, who oversees a small, simplistic Pentecostal congregation in the Appalachian Mountains. The film opens up with Childs’ daughter Mara (Alice Englert) hitchhiking to town with her best friend Dilly Pickett (Kaitlyn Dever) before a church service. Believing she may be pregnant by nonbeliever Augie (Thomas Mann), Mara steals a pregnancy test from the convenience store run by congregation member Hope Slaughter (Olivia Coleman), who happens to be Augie’s mom.  Wrestling with the guilt and possibility of pregnancy, Mara eventually agrees to an arranged marriage with another member of her congregation, Garret (Lewis Pullman). 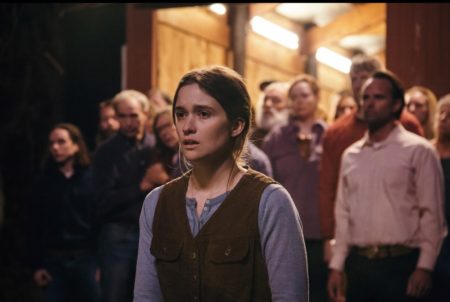 Lemuel Childs’ conviction of community continues to spur outsiders and soon law enforcement arrests a member of the congregation because of their snake handling beliefs. The possibility of losing Mara permanently keeps bothering Augie and he goes against his own convictions to become active again in the church. The church believes if you respect the serpents, they will respect you. If you’re bitten by one, it means either the Holy Ghost or the devil deems you worthy/unworthy depending on if you can overcome the venom. The snake’s bite is a tenacious test of faith. The question is can will power overcome avoiding modern medicine or will tradition triumph? 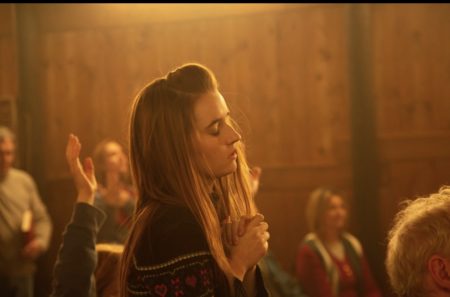 Much like a snake slithering, the twist and turns test our boundaries of comfort and conviction. The movie’s idiosyncratic ideology of community creates a compelling character study with a wonderful cast. Walton Goggins wonderful and amazing hypnotic ascension into this creepy, yet captivating character resonates as one of his strongest performances ever. His portrayal is absolutely astounding and definitely deserves serious consideration. Much like “Justified,” this complicated, compelling character dives deeply into the personal psyche of a well flushed out character. From beginning to end, you can’t take your eyes off the screen when Goggins appears and you only wish he had more scenes. 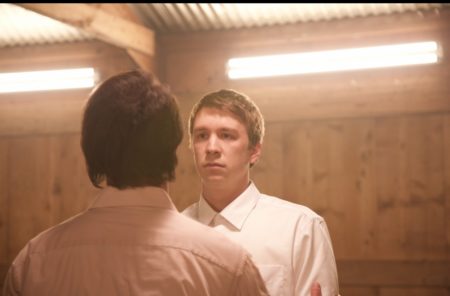 Despite the wonderful performances from Goggins, Olivia Colman and the rest of the cast, “Them That Follows” flounders as another rudimentary run-of-the-mill, melancholic drama dropping the ball. Quality performances don’t dictate worthiness and elevate a mediocre movie into another level. The film’s principal problem relies on the melodramatic elements failing to keep you motivated with wanting to watch more. Honestly, it feels like a bad date night at the theater with an unmemorable evening for a plot. It’s almost like you’re going through the motions, but it doesn’t deter or create an immense impact worth warranting a further evaluation. Sadly, this film forces and actually encourages the viewer to ponder with what could’ve been considering that talent involved. 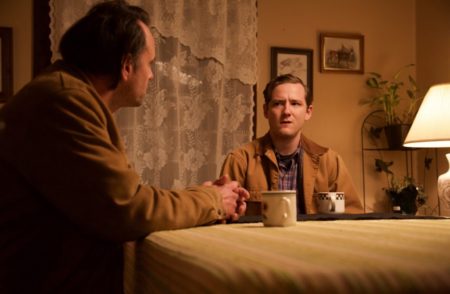 The directorial debut of Britt Poulton and Dan Madison Savage fails to capture beyond a certain cinematic realm and creates a disinteresting sermon preaching to the wrong choir. Although wonderfully cast and captured, the overall feel creates too many forgettable fleeting moments and not enough memorable ones. The unnerving uneasiness with a handheld and shaky cam creates cinematography you want to reach out and double check the projection. The frustrating focus, much like someone sitting on a church bench, leaves you dozing on and off frequently. 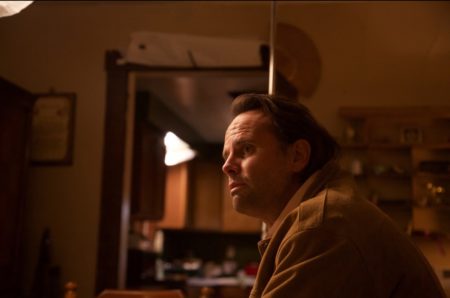 Unlike a snake coiled up waiting to pounce, the audience waits patiently and sadly indefinitely for the film to bite, which never delivers. The lackluster lingering elicits  the dazed and confused emotion one might endure during a boring Sunday sermon. Whether we want to admit it or not, there comes a time when talent trumps stories, but amazing acting can’t compete without balance.