You’ve probably heard me mention my good friend Lisa-Lisa, well, I’m super excited because she’s done an awesome recap for us about meeting the iconic Tim Curry. Now, this story is the first time Lisa-Lisa met Tim and really, is there anything like the first time?

The only advantage of being a little older than most of my collector friends is that I had the opportunity to participate in some amazing fangirl moments while they were crying themselves to sleep as their parents were watching “Charlies Angels” in first-run prime time.

One of my earliest autograph experiences happened 40 years ago this weekend. While still too young to drive, I took the RTD 91s up the Sunset Strip to see Tim Curry at the Roxy. This was Summer 1978, when he returned to the stage that made him famous for the original US version of “The Rocky Horror Show” for the start of his tour promoting his first LP, “Read My Lips.”

I arrived at the famous nightclub around noon for the Sunday, July 16th show (the third of a 3-night stand), knowing it was first-come, first served seating. “The Rocky Horror Picture Show” was starting to explode at that time, so it was no surprise I met a lot of other early arrivers. And, although I wasn’t quite first in line, I did manage to snag a front row seat near the center stage when they opened the doors. 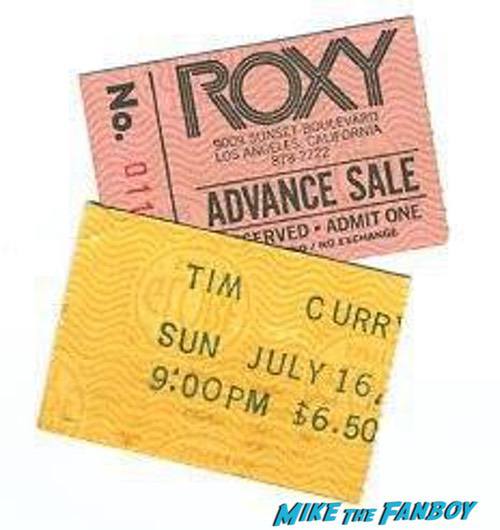 We were treated to a marvelous show that included a theatrical version of the Kinks’ “Celluloid Heroes” and an show-stopping “I’m Going Home” from “Rocky Horror,” during which Tim was shocked by a spray of “card for sorrow, cards for pain” from an over-enthused fan sitting next to me.

After the show, I don’t know what possessed me, I ran to the back door. I had ZERO experience at this point in collecting, but I had taken an advertising table tent for the soon-to-be –released :Read My Lips” off my table, and brought it with me. The door opened after a few minutes and the guitar player popped his head out. I asked him to sign my card, which he did. He said “Would you like Tim to sign this too”? I almost melted into a puddle of teenaged butter at that moment, and practically flew to the moon when he came back with the card, sporting a beautiful signature of Tim Curry.

I’ve had several wonderful Rocky Horror and Tim Curry collecting experiences since then, but there’s nothing like the first Tim. I mean time. 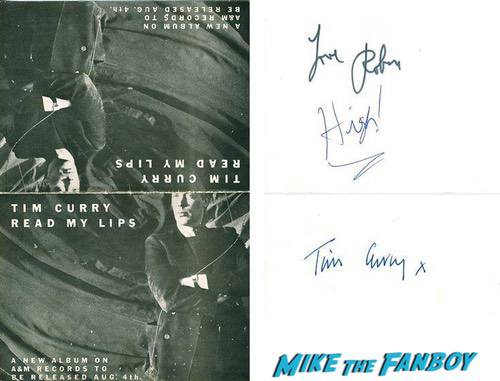