Home / Fanboying! / Tim Kaine Goodness! Dallas Heads Out To Meet The Vice Presidential Nominee And He Was Awesome!

Political season is in full swing. It’s crazy how my Facebook feed fills up with political things. This year, Lord… It’s going to be nuts.

Dallas has always been a collector of Political autographs and has been lucky enough to meet pretty much everyone who has ran for major office in this cycle.

He headed out to a campaign rally for Tim Kaine and had a blast!

Check out his recap below

I went to meet Tim Kaine and his wife yesterday in North Carolina….I got there at 11am…was like the 3rd person in line, doors opened at 12, event supposed to start at 2. Only about 250 people showed up…really small crowd. I was shocked.

Savannah Guthrie from The Today Show walked in, right when Secret Service had my phone and was going through my stuff….so I couldn’t get a picture with her, i was pretty bummed…I love her…but she waved to us and she was there to interview Tim.

Got there, the event was good…got a seat on the front row. 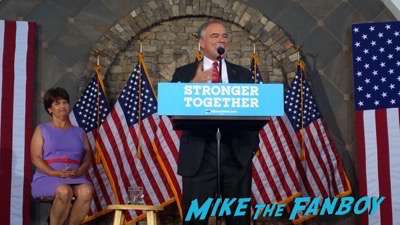 When done, Tim started walking around. They sure didn’t take long putting him on the Clinton routine….just two days ago I heard from a collector friend he was signing stuff at the rope line so I had a few 8 by 10s with me and a HRC book…but a secret service agent walked up to me when he saw my stuff before Tim had even gotten halfway near me and said what’s your name with sticky notes for personalization, and one item only….collecting stuff for him to sign backstage.

I picked the 8 by 10…but then begged and pleaded…showed the agent where I had already gotten HRC to sign the book and drove 3 hours just to get Tim to sign it, and they said we’ll see what we can do…. 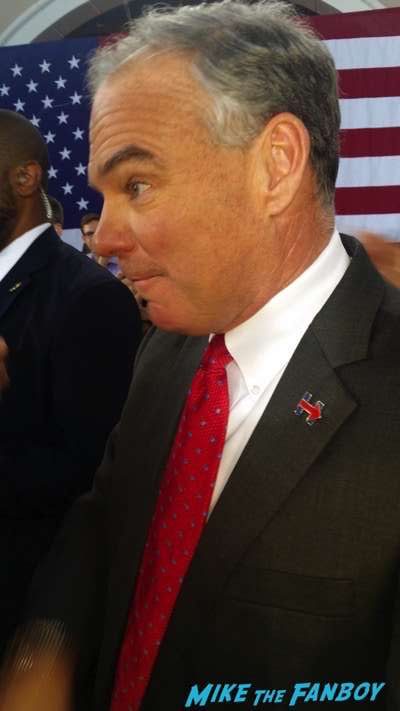 Tim approached, I handed my phone to the agent behind him, and Tim posed for what should have been a great picture….but the secret service agent didn’t tap to focus it before clicking the button…so it was a blurred mess.

Luckily, I found a great shot on a paper’s website of Tim posing for me! 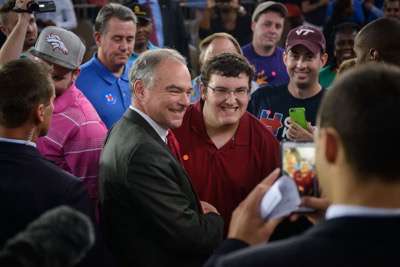 Tim’s wife posed for a selfie with me….but I looked awful in it and it never needs to see the light of day on the internet hahaha.

About 10 minutes after they went backstage, the agent came back and handed me my stuff and said thanks for your support.

Tim signed the 8 by 10, personalized it, wrote You rock! 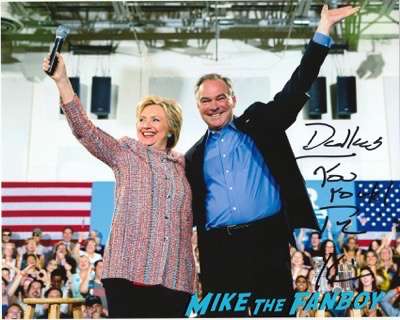 And then I opened the book! Victory! My very long trip was worth it. Full signature of HRC and whatever mess that is Tim Kaine signs….haha…on one item. 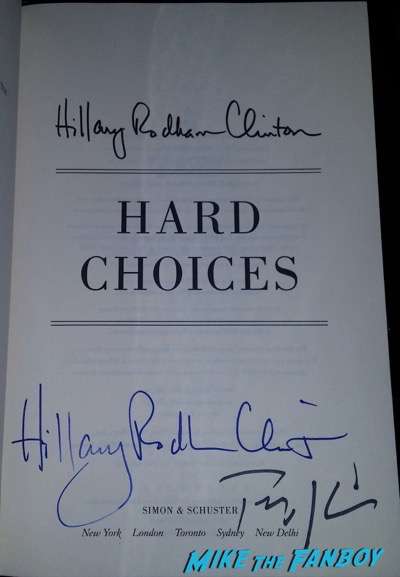 I was very happy. Next POTUS and VPOTUS