Home / NEWS / Titans: The Complete Second Season out on DVD/Blu-Ray March 3! All 13 Episodes In High Definition!

THE TITANS CONTINUE THE FIGHT AGAINST EVIL AS WARNER BROS. HOME ENTERTAINMENT RELEASES

Featuring All 13 episodes and an All-New Special Feature from the Series’ Thrilling Second Season! 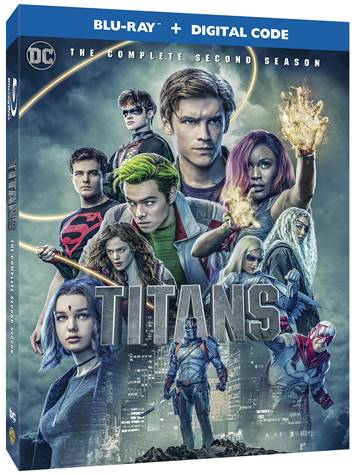 BURBANK, CA (November 20, 2019) – Following the breakout success of its debut season on DC Universe, Titans continues to captivate audiences with its fresh take and cinematic storytelling of the classic Teen Titans franchise. Titans: The Complete Second Season packages together all 13 one-hour episodes plus an exciting special feature from the live-action drama series and will be available on Blu-ray, DVD and Digital March 3, 2020 for $29.98 / $24.98 SRP.

From executive producers Greg Berlanti (The Flash, DC’s Legends of Tomorrow), Akiva Goldsman (Constantine, Fringe, Star Trek: Discovery),Geoff Johns (Wonder Woman, Aquaman), Greg Walker (Extant) and Sarah Schechter (Supergirl, Blindspot, Riverdale), Titans: The Complete Second Season continues the story of these DC Super Heroes as they face their greatest challenge yet.  In season two, following the aftermath of their encounter with Trigon, Dick Grayson reforms the Titans.  Under his supervision in their new home at Titans Tower, Rachel aka Raven, Gar aka Beast Boy and Jason Todd aka Robin train together as a team. They are joined by Hank Hall and Dawn Granger aka Hawk and Dove and Donna Troy aka Wonder Girl.  Although these original Titans attempt to transition into a regular life, when old enemies resurface everyone must come together to take care of unfinished business.  And as this family of old and new Titans – including Conner Kent and Rose Wilson – learn to co-exist, the arrival of Deathstroke, brings to light the sins of the old Titans which threaten to tear this new Titans family apart once more.

The second season of Titans will be available to own on Digital March 3, 2020. Digital purchase allows consumers to instantly stream and download all episodes to watch anywhere and anytime on their favorite devices. Digital movies and TV shows are available from various retailers including Amazon Video, Apple TV App, Google Play, Vudu and others. A Digital Copy is also included with the purchase of specially marked Blu-ray discs for redemption and cloud storage.

TITANS and all related characters and elements are trademarks of and © DC.