TNT is coming back to Comic Con in a big way. They are bringing the sci-fi series Falling Skies back for it’s final go around just as the series starts it’s final season.

The Last Ship is sailing into town with an awesome Oculus Rift Experience, that will be on the convention floor, and there will be star studded panel for The Last Ship and Falling Skies as well.

TNT is bringing the explosive dramas The Last Ship and Falling Skies to Comic-Con International: San Diego 2015. TNT’s presence at the annual gathering will include all-star panels for both series, plus an Oculus Rift virtual reality experience that puts fans of The Last Ship in the middle of the action. Among the many stars set to participate are The Last Ship’s Eric Dane, Rhona Mitra, Adam Baldwin, Travis Van Winkle, Jocko Sims and Marissa Neitling, along with Falling Skies’ Noah Wyle, Moon Bloodgood, Will Patton, Drew Roy, Sarah Carter, Connor Jessup, Colin Cunningham and Doug Jones. Also participating are The Last Ship executive producer Hank Steinberg and Falling Skies co-executive producer Olatunde Osunsanmi.

Below is a rundown of TNT’s events at Comic-Con International: San Diego 2015.
The Last Ship

The Last ShipIn honor of The Last Ship’s second season – which is currently airing Sundays at 9 p.m. (ET/PT) and available across all of TNT’s on-demand platforms – the network is giving fans at Comic-Con the chance to dive into the show through The Last Ship Oculus Rift Experience. As part of this immersive activation, each participant will use an Oculus Rift headset to be transported into The Last Ship’s fictional universe, where they must board a cargo ship taken over by the Immunes (immune survivors of the deadly plague that has nearly destroyed the entire population of the planet) and retrieve the last remnants of the primordial strain.

Also at Comic-Con, TNT will present a panel featuring The Last Ship stars Eric Dane, Rhona Mitra, Adam Baldwin, Travis Van Winkle, Jocko Sims and Marissa Neitling, as well as series executive producer Hank Steinberg. The session will include Q&A from the audience and exclusive video clips previewing what’s to come during the rest of the second season. 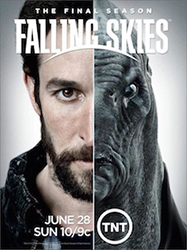 Falling SkiesThis summer, TNT’s Falling Skies will wrap up its epic tale with a spectacular final season, slated to launch Sunday, June 28, at 10 p.m. (ET/PT). In honor of the show’s last season, TNT will present a panel featuring series stars Noah Wyle, Moon Bloodgood, Will Patton, Drew Roy, Sarah Carter, Connor Jessup, Colin Cunningham and Doug Jones, as well as co-executive producer Olatunde Osunsanmi. The session, which will be held in one of Comic-Con’s largest ballrooms, will include Q&A from the audience and sneak-peek video clips previewing the last season of this extraordinary series.