There’s one thing I have to say about people in the horror industry, and that’s they are generally speaking always so awesome. Seriously, I think over any other genre, horror folks understand fandom and passion. I think that’s really awesome!

Here’s a nice lil’ flashback to the long lost summer of ‘14. T‘was the week of Comic-Con and legendary horror director, Tobe Hooper, was being honored at the Vista Theatre in Los Angeles. Horror fans best know Tobe from directing the first two Texas Chainsaw Massacre movies and Poltergeist. This was going to be a magical night. There would be a Q & A with Tobe moderated by another legendary director, William Friedkin, and a small ceremony of their handprints being cemented onto the ground of the Vista. That would be followed by a screening of the newly re-mastered The Texas Chainsaw Massacre. This event was a “must-see” for my horror-loving ass.

After my usual long trek through LA traffic, I arrived to a nice long line of folks waiting to get into the theater. There was a small group of dealers hovering around and I had apparently missed the handprint ceremony and the two directors signing away for the fans and dealers. Yay for me.

Luckily I had a buddy there with a couple of extra tickets and that gave me an opportunity to try for these legends on the inside. I brought my metal case DVD of TCM 1 & 2, The Exorcist DVD and my Leatherface figure already signed by Leatherface himself, Gunnar Hanson. “These would look awesome signed”, I thought. Then again, I always think that about any entertainment related item that comes my way nowadays. (It’s a disorder and I have it bad.)

The theater was packed with all types of folks, all happy to be there. I could see Elijah Wood near the front of the theater and smiled knowing I didn’t need him to sign anything for me anymore. It’s funny that he’s been out and aboot more and more since he signed my Sin City stuff a summer or two ago. Anyhoo, seats were scarce and my buddy didn’t grab me a seat, but at least he got me in. I gabbed with him and his honey a bit while I perused the theater looking for Tobe and Friedkin. I spotted Hooper up the aisle from where I was standing. One person asked him to sign something and he obliged, but I knew better than to follow. I wasn’t opening that can of worms. I was lucky enough to find a lone seat in the row directly behind their’s and it was at a break in the seats so I could get up and go as I pleased without having people get up. Kewl. Now just came the part of dealing with the anticipation that comes with this crap. Watching for bathroom breaks or possible early exits would take over my anxiety from this point. I guess I could give this hobby up now, which I will have to do someday, but then I won’t have cool stuff. That would make me a sad panda and we can’t have that.

The line that was trying to form by Hooper was dispersed and the Q & A began. Friedkin did a lot of the talking and kept things moving at a nice humorous pace. Hooper shared a story or two and it was such a cool experience watching these two guys shoot the shit aboot movie-making. They’ve been friends for around forty years or so, and that really helped make the session feel genuine. It could’ve gone on all night and I’m sure it would have, but the show had to go on. This was going to be cool. I was going to be watching Tobe Hooper and William Friedkin watch The Texas Chainsaw Massacre. This would be a first for me on the big screen.

The movie finally started and the watch began. When you’re a horror fan like me it can be very distracting trying to watch a classic and watch for someone trying to get away from watching their work. It’s pretty common for the celebrity to leave not long after their movie starts. That’s why I always try and sit in an aisle seat to get a good stalking pace on someone trying to make way for their Uber. The only hard part is trying to determine whether the celeb is getting up for the bathroom or the exit. Not too long into the picture the two directors got up from their seats and headed out of the theater. I took my figure with me and left my Exorcist dvd on the seat. It turns out that the handprints in the cement didn’t take the first time and they had to do a redo. Sweet! This was my chance. I texted my buddy and we got to watch a smaller private ceremony of Friedkin and Hooper redoing their handprints and signatures on the ground of the Vista Theatre. 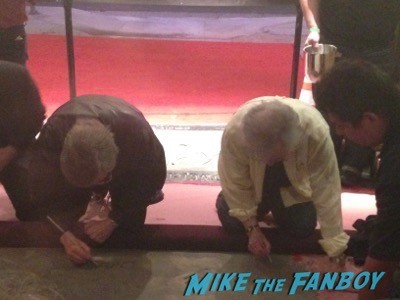 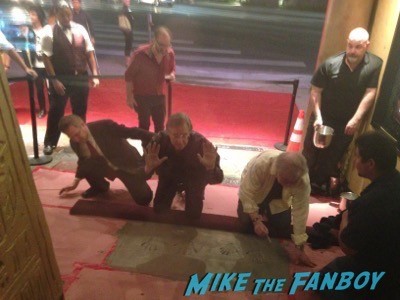 When they had finished I went back into the auditorium to grab my other DVD only to find someone in my seat. I was out longer than I had anticipated but I didn’t think my seat would get aped. 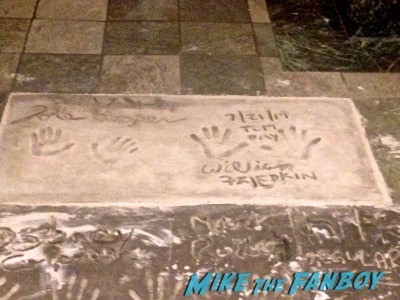 The chick even had the nerve to sit right on my DVD. Who the hell does that? Freakin’ LA. I got my seat and DVD back and headed out to Friedkin. I was a little ambivalent having read aboot a tirade of his the week before at a book signing. He was signing for a couple of dealers and a collector when I got back out so I approached with no fear and asked respectfully if he’d sign my DVD. He did so without hesitation and my only regret was that I forgot my To Live and Die in LA DVD. 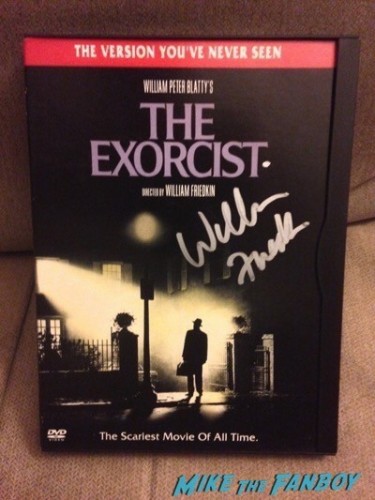 Friedkin couldn’t have been nicer to me and I wish I wasn’t too excited to ask for a picture too. I almost always concentrate on getting my item signed before even thinking aboot getting a picture. Oh well, can’t complain. Friedkin left for home shortly after signing for me. I’m glad I followed the guys out when I did. Next up was Tobe Hooper. He was busy talking to another fan, so my buddy and I patiently waited for our turn. I’ve heard many nice rumors about Tobe and they all seemed true. This dude couldn’t have been nicer. He was more than happy to sign all my items and pose for a picture with me. 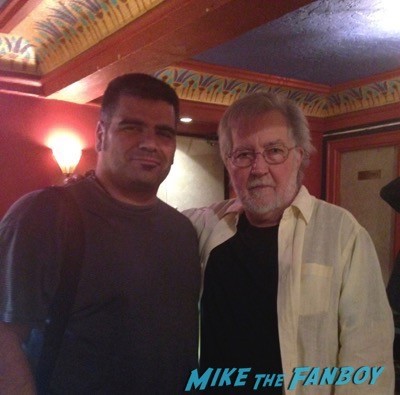 He signed in my blue Deco Color paint pen and the autos looked great. He looked at my figure and claimed “I think I’ll take top billing over Gunnar”, as he signed above the actor who portrayed the chainsaw wielding menace. My buddy Pat got his Poltergeist DVD signed along with a couple other items and we were two happy campers. The folks in the horror industry have always been the nicest and I feel very fortunate to have some very nice signatures on some very awesome items. Don’t forget to be respectful and polite when asking for an autograph and always say “Please” and “Thank you”. It goes a long way. Also, avoid going to Texas. Peace out. 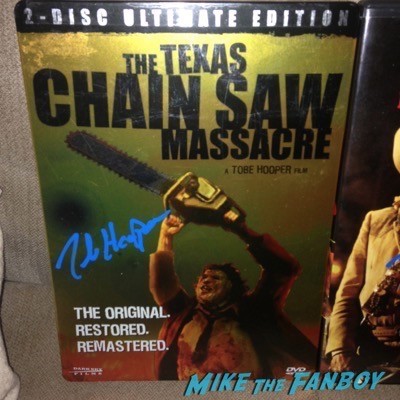 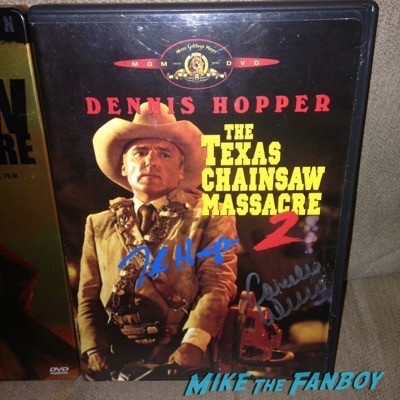 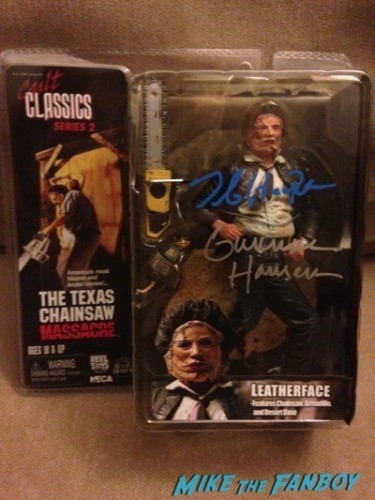