YAY! I always love hearing from The Scarlet Starlet! It’s been too long! Sad face! But I’m glad we are hearing from her now! Yay! Scarlet attended the Toby Keith Concert on November 1st 2011 at the Wembley Arena in London.

Now, I can’t say I’m a huge Toby Keith fan, but I do like a couple of his songs. Scarlet loves him however and you can hear the enthusiasm in her report! Whoo Hoo!

Take a look at her concert review after the jump! And don’t leave us for so long next time Scarlet! 😉

Today is going to be awesome. I am so excited. So excited that I can’t believe I have to do a day of work before I go out! Not only do I have a ticket to see Country music legend Toby Keith play London’s Wembley Arena, but I have a FRONT ROW ticket. I’ve never had one of those before, and I fully intend to supremely enjoy the experience! 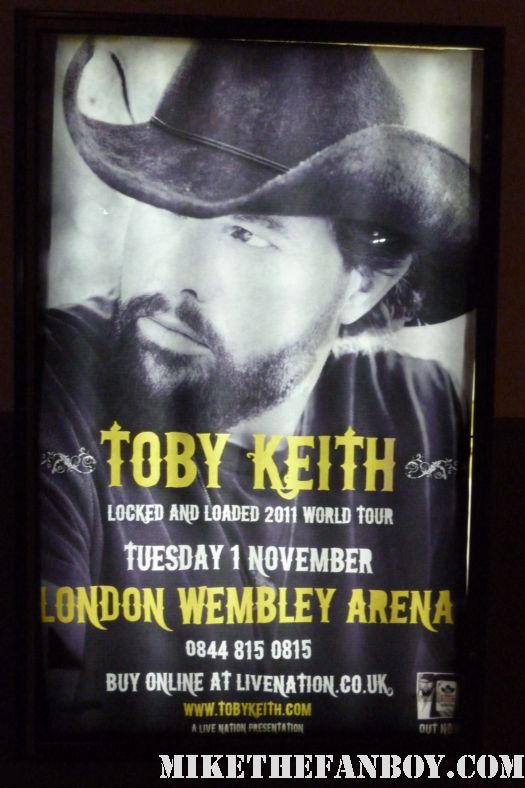 So, regarding Toby Keith; I’ve been into Dolly Parton since I was young, so I’m not entirely new to the country music scene, even though it doesn’t have the largest following in the UK (nothing like the Country music scene in the US anyway; never mind, I never liked running with the pack!). A random ‘Top of the Pops’ episode in 2001 introduced me to Toby’s single release “I Wanna Talk About Me” – a fun song about a man who can’t get a word in edgewise – which I loved and managed to get my mitts on. And that was that until the advent of youtube, and a brainwave a couple of years ago which compelled me to find his music videos online – and from then I was hooked! Having learnt the words to every song on his ’35 Biggest Hits’ album, I was stoked to hear that he was playing the UK this year! I put off buying tickets for AGES because I couldn’t’ find anyone to go with (country music philistines!) then thought, ‘sod it, I’m going anyway!’ – and by some miracle I managed to land a front row ticket! Oh yessssss!!!!!! I bought his latest UK album release, ‘Bullets in the Gun’, which I listened to constantly, and his new US releases (‘Made in America’, and ‘Red Solo Cup’) via youtube – and now the day is here!

I love the cleverness of his songs; they’re a bit out of the ordinary, less cliché and with more inventive lyrics. He has an amazing way of conveying emotion, and doesn’t take himself too seriously (see Red Solo Cup and Get Out of My Car as cases in point!) He also has a gorgeous voice. And I LOVE his music – ‘I Wanna Talk About Me’ has a special place in my heart of course; ‘Whiskey Girl’ I have adopted as a Scarlet personal anthem (whiskey being my tipple of choice); and ‘Kissing In the Rain’ is one of the most beautiful love songs I’ve ever heard. And I do also have some illicit love for the non-PC ‘Get Out of My Car’! :0)

So, after work, I hit the trains – it’s a bit of a tortuous route to Wembley Arena by train from my house – I have to take three different trains and change twice, but I get there in good time, not long after the support act started. The support act, Jill Johnson, is great – she has a beautiful voice. She’s not on for long; the excitement is building while we wait for Toby to take to the stage! The set-up is cool; the seats facing the stage are in two sections and there is also tiered seating at the sides of the arena. I’m on the FRONT ROW of the seats facing the stage and I’m just to the left of the centre; I have a great unobstructed view of the microphone. The backdrop is immense and I’m wishing I had actually worn my (pink) cowboy boots and (brown) cowboy hat – I totally would not have looked out of place, as I had feared! Everyone is in checked shirts, cowboy hats, blue jeans and cowboy boots. I’m jealously eyeing those people grinning as they walk past us, wearing their ‘Toby Keith Meet and Greet’ stickers – next time, I’m gonna get me one of those!!! 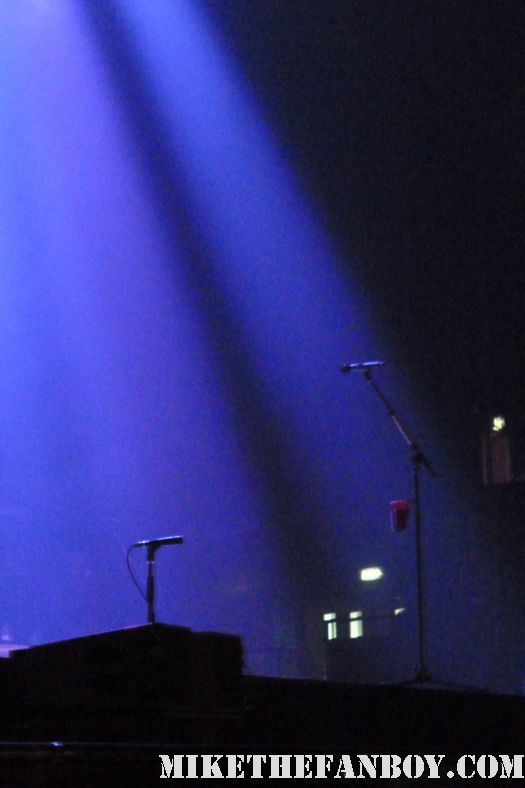 It’s about 8’o’clock when the lights dim and I hear the tell-tale opening chords of ‘Made In America’ – and O. My. God. – here we go!!!!!!!!! I don’t remember if I started screaming or singing, probably singing (although you could be forgiven for not being able to tell the difference). I knew all the words, and tried not to feel judgment upon my fellow man for not having learnt them all! (I get my comeuppance when I don’t know the next three – judge not, lest ye be judged and all that…). 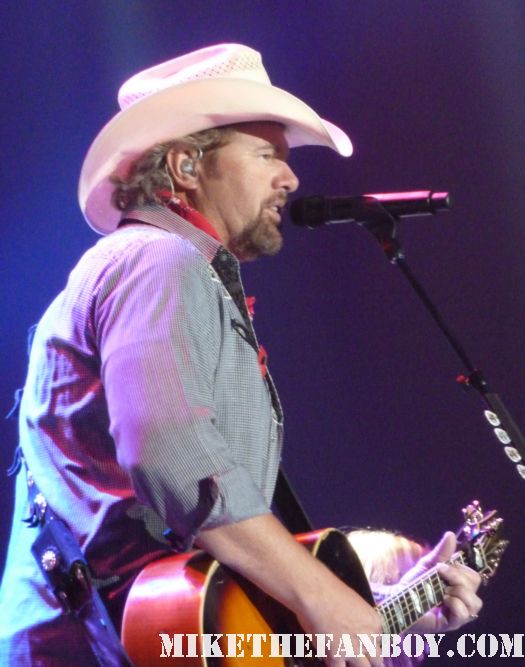 OMG it’s amazing! After ‘Made in America’ the tempo slows a little for the next three or four songs, and I get some awesome photos. I’m enjoying the atmosphere – everyone is chilled; I’m loving his voice, and thoroughly enjoying my little self! The fifth song is one I know (‘Get Drunk and Be Somebody’) – I can’t believe no-one is dancing! This needs to be rectified! 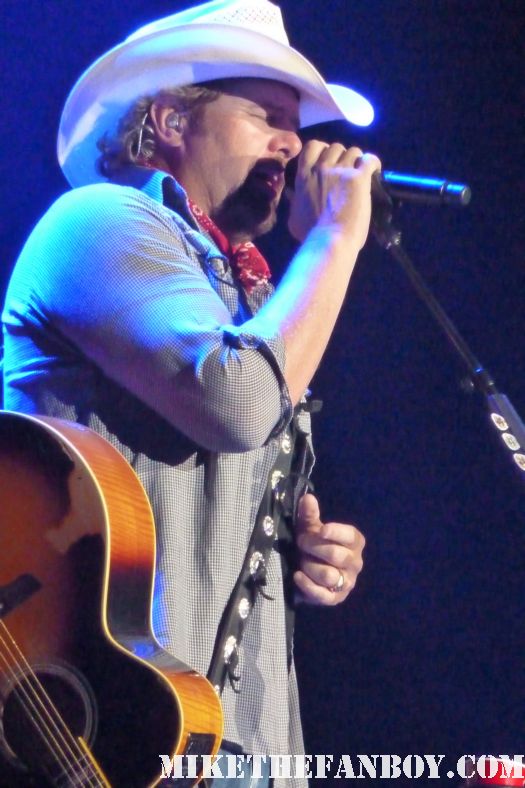 There is a gap between my good self and the stage, which security is rigorously policing, but there’s enough space to dance! Fortunately, some of my neighbors are inspired to do the same! Oh yeah – getting the party started on the front row! Some attendees on the other side of the stage are Two-Stepping – and it’s all good! Toby seems to approve! :0) 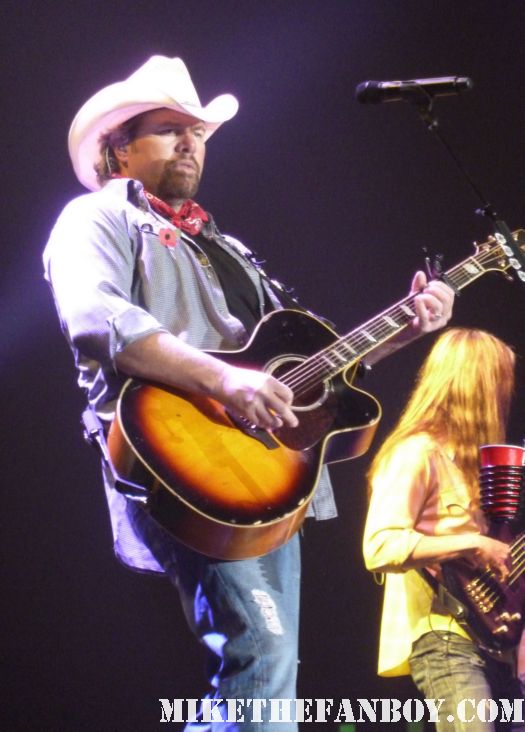 Then we get ‘Red Solo Cup’ (ode to a drinking receptacle) – and although someone has thoughtfully attached a red solo cup to the microphone (must be specially sourced, we don’t have them in the UK!) it’s leaking – so someone rushes off to get Toby a new one – he is then presented with the tiniest red solo cup known to mankind – do admire the photo; technically, there is a red solo cup there! 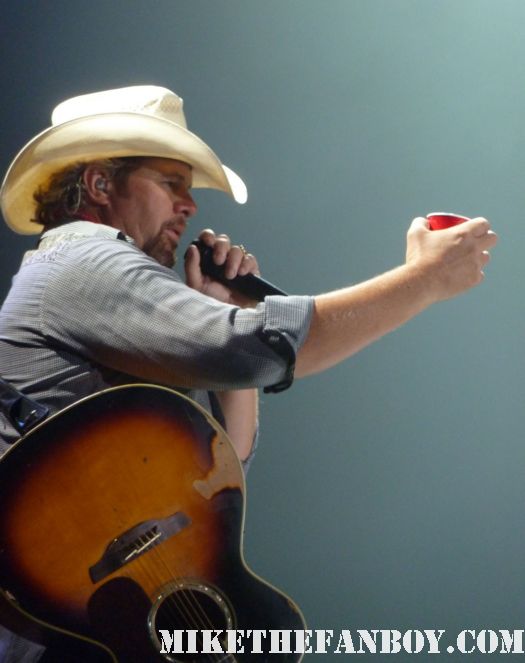 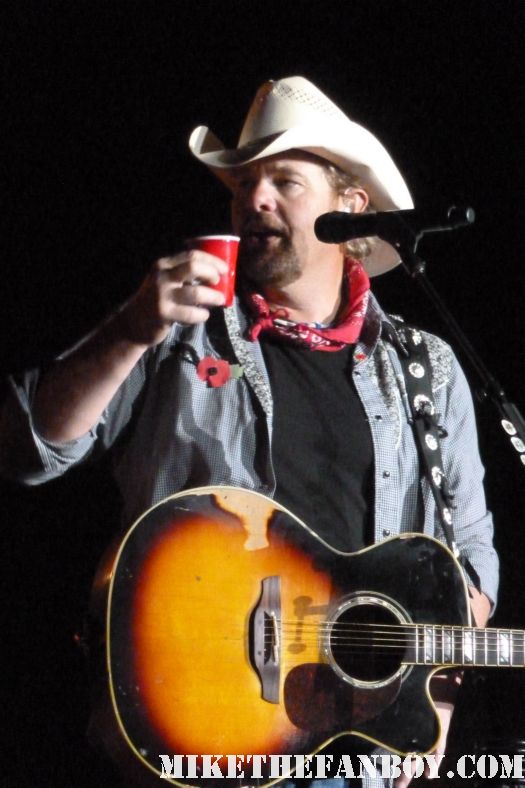 Toby then sings us the title track of his new album, which hadn’t at that time been released in the UK – ‘Clancy’s Tavern’; a song inspired by his grandmother’s bar – and he’s kept all the names the same; it’s a sweet song, a very moving tribute. Then he tells us the story of his very sweet ballad ‘Does That Blue Moon Ever Shine On You?’ and how against unpromising start it made it onto an album after he played it when supporting Reba McEntire. 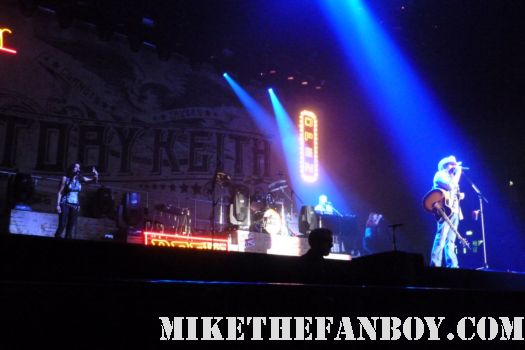 After that the tempo ups again – and damn! He’s good! We get ‘Who’s Your Daddy’, ‘As Good As I Once Was’, ‘I Love This Bar’, ‘American Ride’, ‘Should’ve Been A Cowboy’ and then – O MY LIFE, I think I may faint, ‘Whiskey Girl’, followed by ‘I Wanna Talk About Me’. Toby is throwing guitar picks to the crowd, he singles out a silver-haired lady on our side to receive one. With ‘American Ride’ he traverses the stage and stands right in front of me! We finish up with ‘I’ll Never Smoke Weed with Willie Again’, ‘Get Out of My Car’ (where we are instructed to copy the actions of the back-up dancers, who certainly seem to be very good sports!), ‘Beer For My Horses’ and ‘How Do You Like Me Now?’. 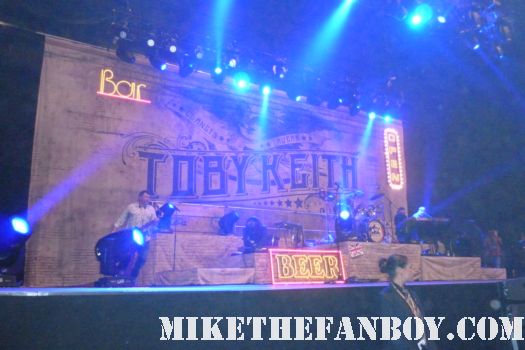 When he leaves the stage we call for an encore – and we get one! ‘A Little Less Talk and a Lot More Action’. Awesomeness. Fact. 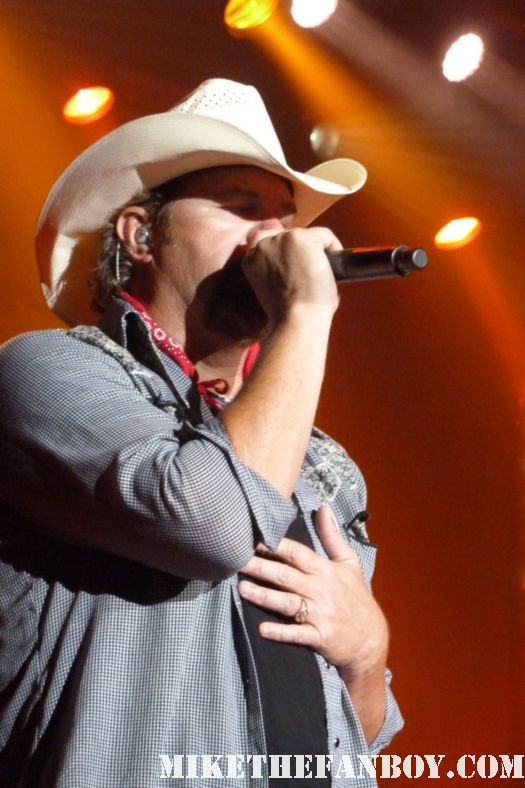 As I tumble out of the venue, I realize that he’s played longer at the London event than in other UK events, and as a result I have 10 minute to get to a train 20 minutes away. It’s not going to be good. I try to be cunning and jump on another train line, blazing a new trail to try and beat the clock to the last train, but it doesn’t work, and I have to get my sister to come and pick me up from darkest Harlesden at 2am, when I’ve missed the last trains, and the night buses seem to have disappeared… but dammit, it was WORTH IT! A brilliant concert – can’t wait for the next one! :0)