The last time Tom was around, he was promoting Rock of Ages, when Mission Impossible and Jack Reacher came out he wasn’t in LA so there wasn’t any opportunity to even see him.

Now, its Oblivion time! I’m actually looking forward to Oblivion, it looks so good and it’s from the director of Tron:Legacy which I loved soooo… High hopes.

Tom was out promoting Oblivion at a talk show along with pop goddess Ke$ha. I know, I know… but I love Ke$ha. There, I said it. Scotty loves her too… Okay, I’m kidding… He hates Ke$ha but he’s here for Tom Cruise along with Jack, The Other Mike, Billy Beer (who is trying to celebrate his birthday by meeting Ke$ha) and I think even CB.

4:45 p.m. – The main problem today… Disney Pin People. Apparently, there is some limited edition pin that goes on sale like SUNDAY and people have been camped out for days. Like, they got here on Tuesday and have been sleeping on Hollywood Blvd. FOR A WEEK! TO GET A PIN!

4:49 p.m. – I know, I probably should understand that level of fandom… But even though I’m at least p nuts I don’t think I’m slept on Hollywood Blvd. to meet anyone. Plus, with the autograph hobby, you get to meet a celebrity, have a moment etc… It’s not like… Here’s 10 bucks give me a pin. I get everyone has a hobby but this is a little beyond me. More power to you guys. God bless you all… But wow.

5:01 p.m. – So, the fence is at least half full by the pin people which means the dealers and collector’s are going to jump on the tents and stuff to get Tom. LOL…

5:04 p.m. – I think every collector in Hollywood is here. Seriously… EVERYONE! I know Tom is a star, but I didn’t think he was that popular still. Man.

5:23 p.m. – Billy Beer is here, and yes it’s the actual day of his birth! And he’s here! In an ally in hollywood standing in water waiting for Ke$ha. He even made a sign. Yep a sign.

5:41 p.m. – Honestly, I’m thankful I have friends to hang out with. I already apologized to Scotty because I’m sure I’ll be molesting him later unwittingly. 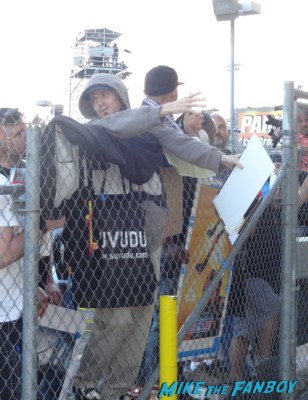 6:18 p.m. – I’m going to focus on my Top Gun and Oblivion mini poster with my 1992 Rolling Stone magazine as a kicker. We’ll see. Plus, I have a couple Warrior mini posters and the V magazine for Ke$ha.

6:22 p.m. – Seriously Jack is threatening to sing Walking With a Ghost by Tegan and Sara and them there, is fighting words. Like, Oh we’re going to fight! LOL…

6:42 p.m. – People are yelling! It’s go time. The three of us take our positions and honestly, I can’t see anything. I mean I keep asking Scotty is everyone is alright and on one in our group is covered. Billy Beer is waving his Ke$ha birthday sign, oh it’s on like Donkey Kong.

Tom comes right on over and starts signing just to the right of the pin people. It’s madness. People run, they are trying to jump over others… Why? Sigh…Tom Cruise does down the line leading to the barricade, it’s crazy times. The fence in front of Scotty isn’t that supported and it could go over at any minute. I’m trying to hold the posters out and my hand is starting to cramp up. I can barely move, madness…

6:43 p.m. – Tom is at us now. I can only see the top of his head. Seriously, that’s all I see. I feel my two posters get signed and then I hold my magazine out. I asked him if he would mind signing the magazine. I swear hands were everywhere. Tom signs my magazine, as well.

Scotty got two, Jack got two and I got three. Then Tom continued down the line, but I think he stopped about 3/4 down the barricade and left.

7:01 p.m. – I have to tell you though… these are such nice Tom Cruise autographs. I mean he signed huge and they look stunning. Damn… I love seeing a beautiful autograph. 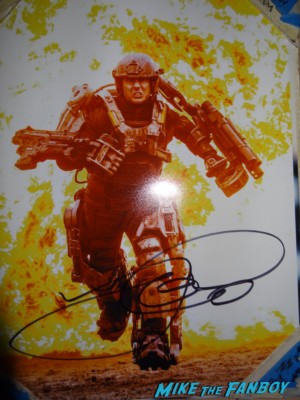 Now we wait for Ke$ha. I’m hoping that she comes over man… I met her once and she was super nice but you never know.

7:16 p.m. – We went and stood by Billy Beer. After all, it is his birthday. And there she comes. We all yell and yell. Ke$ha looks like she’s going to leave and then decides to come over.

She signs a little at the fence and does some photos through the fence as well. Scotty has one of my mini posters and I have that and a magazine as well. Her security is literally holding her up. I think she had a little too much fun in the green room. Finally Ke$ha makes her way over to us and signs one mini poster for Scotty and then my mini poster as well.

I asked her if she would mind signing the “V” magazine and she signed that too.

We all yelled for Billy to get a photo but it didn’t happen. 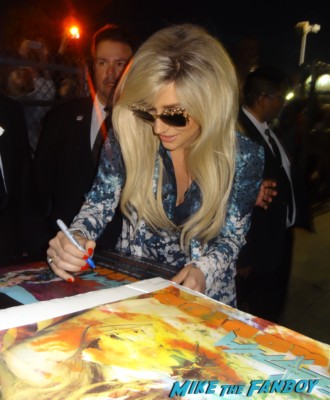 Ke$ha did write Happy B-day on Billy’s photo for him, which is really cool. That was the best photo shoot ever! 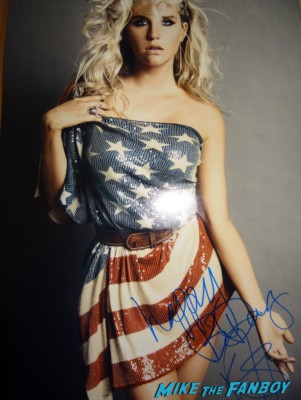 Man oh man, I feel like I just went through war. It was nuts!

After that chaos a bunch of us went out and had drinks will Billy Beer for his big day!

And the pin people are still waiting…