Home / Ace • Fanboying! • TTM Tuesday! • Walking Dead / TTM Tuesday! BREAKING! One A-Lister Is Returning All Fanmail! The Walking Dead No Longer Wants Mail! And Jason Alexander Weighs In On Autograph Collectors & What Not To Do! Addresses And More!

For this weeks TTM Tuesday, Ace has a lot to talk about!

There are Broadway fails, yep one A-Lister is sending out form letters to anyone who writes to him.

Then, The Walking Dead… Dead! Yep, their fanmail address is done. It’s over. Apparently, they get so much mail they had to close the address down. Ace has the scoop on what to do to get a letter out to the cast.

Finally, a subject I think is super interesting. Seinfeld star Jason Alexander is weighing in on autograph collectors and more specifically autograph dealers. He really does boil it all down and I think it’s a great read. Everyone should take a look at it.

Check out this weeks TTM Tuesday after the jump!

What’s up autograph fanatics! Ace here with TTM Tuesday!
We got a lot of craziness going on! This week, I have three TTM breaking news stories for you… 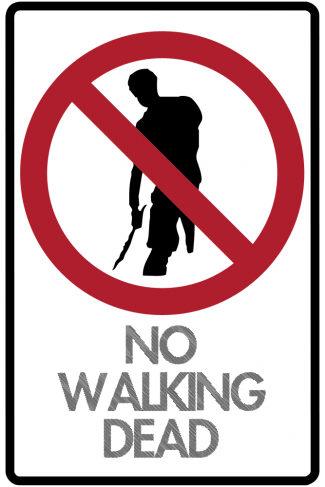 The Walking Dead will not be signing from the Via Venue address this year. Norman Reedus, Steven Yeun, and their people have confirmed it. AMC does not want you to send autograph requests and fan letters to them do to the overwhelming amount of mail they get. They want you to send to their individual agents and fan mail locations… Mikethefanboy.com will compile a list for you as the time approaches to send… BUT, do not send to the VV venue address in Senoia, Georgia. Any fan mail sent to the cast will be marked RETURN TO SENDER.

The second breaking news story: Jason Alexander signs fanmail! He confirms his dedication to his true fans across the nation by signing fanmail but disses “creepy” fans that look for his autograph at airports and restaurants.

I get about 100 pieces of mail per week, stuffed with things for signing. In almost every case, I personally sign them. The exceptions are when people forget to include a way to return stuff or if the letter is inappropriate or suspicious. I have a service that screens those out. Other than that, I try to respond to everyone, eventually.

I love meeting people when I travel. If you approach me, I think you will find I’m about as affable a guy as you’re likely to meet and I’m always very appreciative that people go out of their way to talk to me about how something I’ve done has either entertained or helped them in some way. I travel all over the world and I am always amazed that something I’ve done, usually Seinfeld or Pretty Woman, has penetrated that deeply into other countries and cultures. It’s a great way to move about the world and feel welcome in places I’ve never been. So, meeting and talking with fans is almost always a very pleasant experience. The trick is to remember we don’t actually know each other and I’m not a friend or relative.

HOWEVER, there are an increasing number of occasions, like the ones I recently experienced, where collectors are waiting for me with bundles of stuff at airport terminals, or hotels or restaurants. Now, I never fly or stay at hotels under my professional name – nor do I ever announce that I’m on a particular flight or at a particular hotel. So, when I get off a plane, usually traveling with family or on business — and a group of collectors are there with piles and no good explanation for how the hell they knew I’d be there – that to me is a bit stalker-y. It’s creepy. How do these people know where I am and what I’m doing? I ask, but they don’t answer the question.

So, I put out the message that the people who stake out those arenas will not get what they want from me. It is an inappropriate place and time. But when I’m performing and I exit the venue, I’m happy to spend as much time as it takes to meet people and sign or whatever. And there are plenty of legitimate addresses on the internet for people to write me. As I say, I almost always respond. Some things do fall through the cracks, but I try. I’ve even been known to respond positively in a restaurant or on the street, if I can.

Now, for those very few of you who have tried to take me task, I hope this clarifies the issue. If you still feel like I’m unappreciative, well then – I guess you have to write me off. For everyone else, thanks for understanding that even the most public figure (which I am certainly not) has the right to some boundaries. But my boundaries are fairly minor. And they do not mean you can’t say hello. We may not forge a meaningful relationship, but that doesn’t mean I’m not happy to meet ya.

Thanks for reading. For the majority of you, sorry to bore the living crap out of you with this.

As shown on here

The last, and probably most disheartening one of all… Tom Hanks is sending form letters claiming that he cannot sign fan mail from LUCKY GUY! 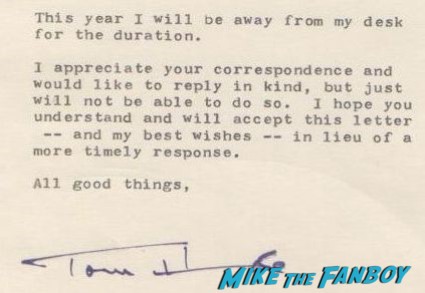 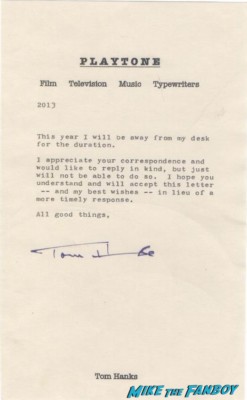 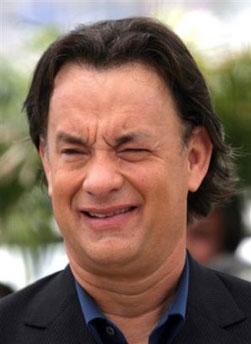 Now, I know this is a bittersweet article but, I hope you enjoyed it.
Now, remember, there is always a graphing opportunity out there… You just have to find it.
Until Next time,