Dave was very fortunate this past week! He was able to meet the new Spider-Man Tom Holland! Now, Tom is super nice and was sweet enough to head down between press events and meet fans while out promoting the new film.

Check out Dave’s recap and pics below! Thanks again for sending this over Dave, don’t be a stranger!

It was not the average typical Tuesday when my friend Ray and  I got ta text that Tom Holland was coming to town for a Spiderman-homecoming red carpet event  at Marina Bay Sands the very next day.  We were still on a high from meeting the super gracious Karen Gillan ‘Nebula’ GOTG vol 2 and  At first we were not sure if this was legit. I mean how often do two stars of Marvel films drop by our little island?  Now Marina Bay Sands was the venue of the Amazing Spiderman 2 red carpet event  in 2014  and last year’s  Captain America: Civil War premiere, but those were announced weeks in advance. I was lucky enough to have been invited to both of those events, but there was no forthcoming invitation this time.

At first we  thought it might be a hoax, then Tom Holland posted an instastory from his balcony and then from his hotel room and pool. It was Tom’s day off before press junket officially began and  most fans still had not caught on that he was in town. So I hightailed it over to Marina Bay Sands in the hopes of catching the web-slinging superstar.

While Ray rushed over to the poster shop to pick up some posters to get signed I waited in the lobby. Now when  high profile celebs stay at the hotel, they have the option of using the VIP entrances and exits. The Captain America cast used them but Andrew Garfield and Emma Stone did not.  It was pretty much hit or miss situation. But we had to chance it.

When Ray and a fellow collector Ken  joined me  a while later. Tom and his friends Harrison and Jacob were still at the pool. so  we figured it would be a while before he would come down. So it was with complete shock that we spotted him emerge from an elevator with his co-star Jacob Batalon  before quickly going back up.

Figuring it would bs sometime before he came down again, I decided to rush  home to run some errands.  I had just got home when  Kenneth called me to say that Tom had come back down and signed autographs and taken selfies before he left for dinner. Darn! I ushered right back to the hotel and decided to chance it. Fellow autograph collector Song arrived too as did some other fans.

We waited around for about an hour and a half before Tom arrived back without security and gamely signed and posed for selfies for the few of us there before heading back up to his room, 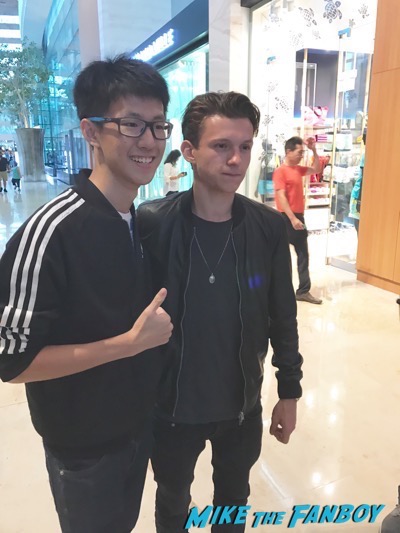 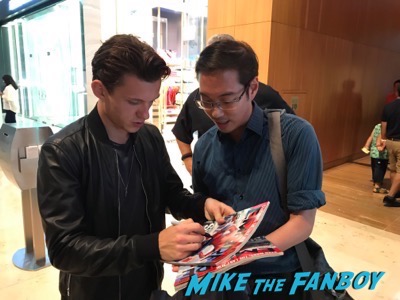 By the next day his teenage fans had found out that he was in town and they swarmed the lobby. But what Tom did was way too cool. He found time between his press sessions to come down and sign autographs and pose selfies over the next two days. He also visited a local children’s hospital dressed as Spidey. Way Cool!

Though we didn’t snag invites to the exclusive red carpet event, but our close encounter with the friendly web-slinging movie star more than made up for it. Tom’s got to be  one of the  fan-friendliest celebs we’ve met here. 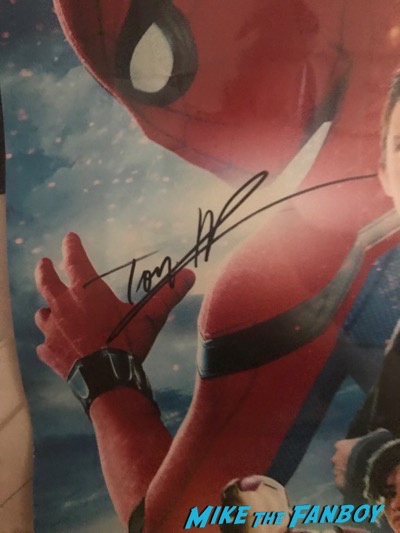 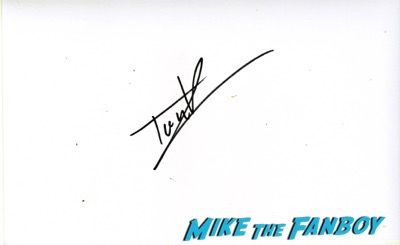