I love it when a plan comes together. Sometimes you have to put in the time, but in the end it’s all worth it. Case in point, Suddenly Susan headed out to meet Tom Welling. Now, he wasn’t on the list for Draft Day, I really have only heard one or two stories where he’s been out and about and they were not always pleasant.
Still, Suddenly Susan gets her man! Not only did Tom Welling show up, he was super cool!

If you know me, you know I love me some Smallville. Superman is my favorite comic book hero of all time and I absolutely loved that show! Never missed an episode in all of its nine years and have most of the DVD sets at home. Trying to meet Tom Welling is a lot like trying to meet the real Superman. He’s never around! He lives in NY and hasn’t done any acting since Smallville ended. So, when the premiere for Draft Day was set, I just had to go!

You’ve read the full write up from Mike, so I’ll just recap my exchange with Tom. First things first. Here’s my advice to anyone in this hobby or starting this hobby – don’t listen to anyone. Sure, you can take advice about which are the best pens to use and whether or not you need to rub a dollar bill over a glossy magazine cover so it won’t smudge, etc. But when it comes to whether or not a celebrity will or will not sign. Don’t listen. If you want to try for them, do it! Case in point: Mr. Tom Welling. Another case in point: Cameron Diaz (read The Other Woman premiere recap)

I’ve seen quite a few videos of Tom at red carpet events and talk show appearances. He seems super friendly, taking photos for fans because he’s so tall and signing his life away. Now, talk to any dealer at the premiere and the word “dick” was used a lot, as well as “rude” and “not nice”.

We weren’t even sure if Tom would show, as he wasn’t on any guest list for the premiere. I had a positive feeling though, enough to take a half day from work, so my hopes were high.

I had a stunning Smallville poster that I really wanted signed in gold. I had an extra poster as well (hey, if Mike can manage to get 38 items signed at a time, I can try for a second). I believe after the first three drops, another limo pulled up and who gets out of the car? It’s Tom welling! Yay and happiness. He makes a bee-line straight for our section. I have my gold sharpie out and ready and Tom is reaching for it, just millimeters away, but grabs a black sharpie instead. He signs for someone, then signs my poster. Then he’s off down the line. Luckily for me, Ace was kind enough to get my second poster signed, as he didn’t have anything for Tom. Thanks Ace!! 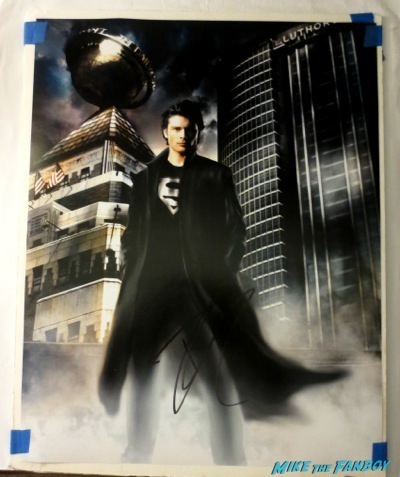 Just when I think that’s that, Tom comes back down the line to our section again. I get ready for the photo op. I tell him I’ve been there all morning and ask for a pic. He says, sure, let me know when you’re ready. I lifted my camera and because I’m so short and he’s so tall, I had it pretty close to us. Tom yelled, “Whoa! That is close”. I pulled my arm up as high as I could and DVD Dave ran interception for me, blocking the boards that would have ruined my photo. Thanks Dave!

I snap the pic and even though it’s not great, we’re both in it and our eyes are open and mouths closed so I’ll take it. 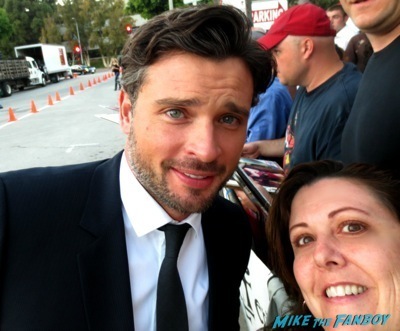 It was super successful and I couldn’t be happier!! 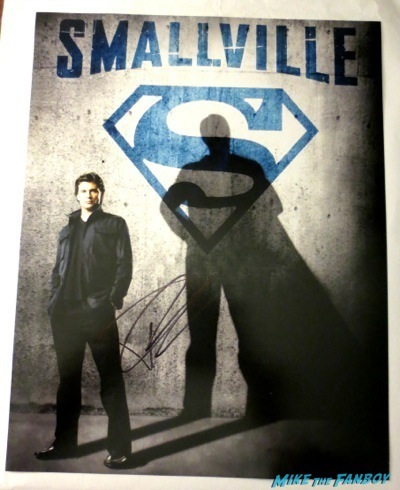