What’s up autograph fanatics! Ace here with another new article I am trying out…

Now, Anyone who knows me really well, knows that I love collecting voice actors or cartoon related autographs. My toon collection has grown tremendously in the last five years. It is something I take extreme pride in.

I have to say that I enjoy getting voice actor autographs more than getting an A List movie star… For some reason it is more fufilling. It is probably because it uncovers the ten year old in me that watched those cartoons on a saturday morning. I would come home from school and flip on Boomerang which highlighted every Hannah Barbera cartoon from the past, and then flipped channels over to the classic Cartoon Network right after.

This article is going to be a little bit of everything! I will talk about In Person experiences, do show and tell, talk about your favorite cartoon shows, spotlight voice actors, and much more!

My goal is that you become more aware of the voices that you admire but probably never knew their names.

This week I want to highlight the show, Pinky and the Brain!

It was the first animated TV show to be presented in Dolby Surround Sound! It  was presented by Steven Spielburg and Amblin Entertainment with Warner Bros. Animation as the head of production. 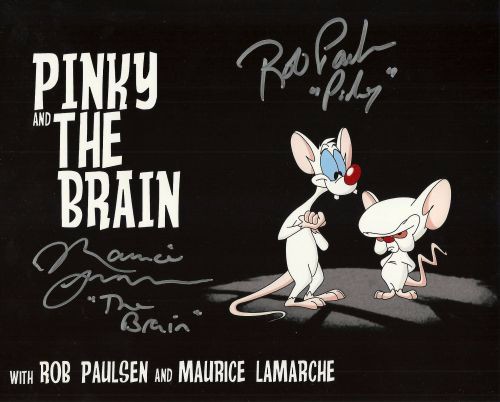 Pinky and the Brain originally appeared in 1993 as a segment within the Animaniacs. They spun off into their own show from 1995 to 1998 revealing the world of two laboratory mice who attempt to take over the world. 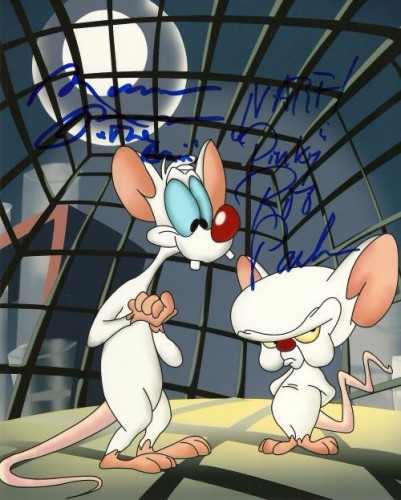 Each new episode brings forth a new plan for world domination, but ultimately fails. Brain is the schemer, but Pinky’s lack of wits with Brain’s impossible plans prevent them from ever succeeding.

The series was created by Tom Ruegger and voiced by Rob Paulsen “Pinky” and Maurice LaMarche “The Brain.” 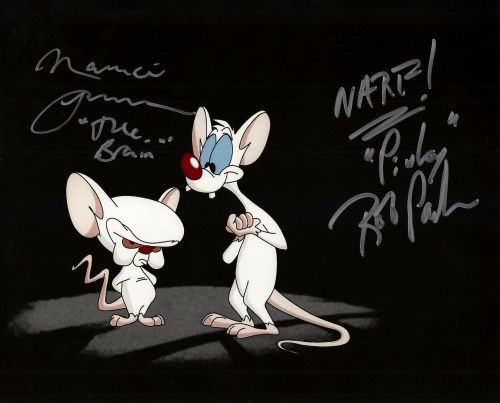 There was only 4 seasons with a total of 65 episodes! The show parodied tons of notable figures at the time with cameos of political and other caricature gags. In addition, each episode, at times, parodied films and novels that were popular at the time.

I adored this show. I remember going to the Warner Brothers franchise stores with my Mom and choosing one piece of animation memoribilia a week. We never missed a week. Due to this, I have been able to get the comics that I had as a kid signed by Rob and Maurice.

Both are extremely kind hearted. They are both legends of their field and are among the top ten voice actors in the business. Rob Paulsen can be seen at conventions across the mid west and east coast. However, Maurice LaMarche does fewer conventions making it tougher to complete Pinky and the Brain combo pieces. But, it is still possible! If you have a chance to meet either of them, you have to!