Can we just take a sec and say… Nathan Fillion is awesome! Not only is he one of the most fan friendly dudes on the planet but he’s a Joss Whedon regular who rocks in every role!

We’re going to have a review of Castle season 5 this week but let’s take a look at Mr. Nathan Fillion’s other roles shall we!

May I present MTF’s top five roles of THE FILLION!

5. Desperate Housewives – As the husband of Katherine Mayfair Nathan Fillion was more subdued as usual, but brought his trademark swagger and smirk to Wisteria Lane. Dr. Adam Mayfair may have only lasted 11 episodes but he Rawked!

4. Waitress – This is the indie movie that could! If you haven’t seen Waitress yet, you really need to go rent it. Keri Russell and Nathan Fillion are an adorable couple and how can you resist any movie with a marshmallow pie? How can you?

3. Buffy The Vampire Slayer – Caleb was such a good villain, Nathan Fillion almost saved Buffy season 7. Almost. When we first see Caleb, he’s charming a Slayerette but he soon becomes one of the most menacing foes Buffy has faced! And he pops out Xander’s eye… And really who hasn’t wanted to pop out Xander’s eye? 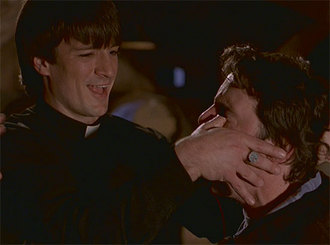 2. Castle – Richard Castle is the perfect part for Fillion and he slides into the role perfectly. A combination of sass, smirk and goofball this is the second best part Nathan has ever played!

1. Firefly – Because honestly nothing can top Firefly. Nathan is so so so good as Mal that it was hard to see him as anything else for a while. this combination of western sci-fi spectacle was ahead of it’s time and I still mourn it’s cancellation!