I will admit it. I am a Goonie. Always have been, always will be. I happen to live a couple hours away from where the film was shot (Astoria, Oregon), and I have visited the filming spots several tietting Marthames over the years. Like any good autograph fanatic, I would like them all from “Goonies”, but for some reason I just started collecting the films autographs 3 years ago.

My first was actually meeting Sean Astin (Mikey) at a comic-con. He was cool- funny too. I have a photo of the 4 main cast that he signed.
Next was getting Martha Plimpton (Stef) TTM while she was in a play in England.

I scored an authentic TTM from Director Richard Donner who signed a small poster.

And as of today, I added Corey Feldman (Mouth) who signed the previously signed Astin photo TTM.

Should I risk it and send to Data and Chunk? I’m nervous to do so, but I really want a complete cast signed photo from my favorite! Tell me what you think! 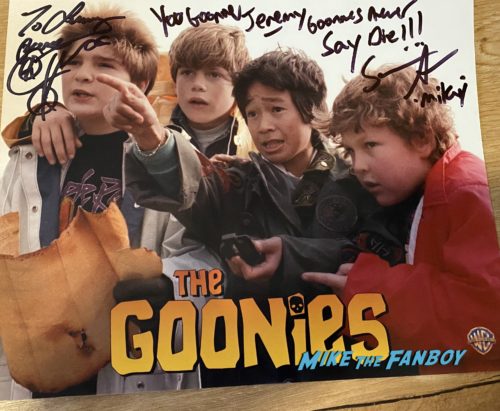 Are you ready to try your hand at collecting? Good- because these celebs have been signing up a storm this week: