Ace has all the scoop on your through the mail autograph needs! There are people finally signing, others who have stopped! Oh man, oh man… It’s a tricky world out there.

Plus, Ace has a success to show! Woo to the Hoo!

I have some TTM news for you! Again, Some people are catching up on their fanmail… Guess who! And we have some more additions to Broadway signers that you want to know about!

Before we get on to that other information, I have a playbill success to show you! 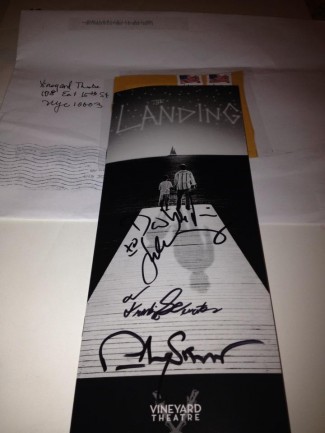 Moving on to people signing on broadway

Bill Cosby has stopped signing fanmail! If you were planning to send to him, you just missed his signing window! Several people have received letters and notes from Sondra W. Pugh, Bill Cosby’s assistant, claiming that Mr. Cosby no longer is able to accommodate the amount of fanmail he receives. He apparently can’t accommodate fans IN Person either, but that’s a different Fanboy fail story… ZING!

Barbara Streisand has also halted her fanmail capacities! She recently signed for a period of 6 months. Now, of course, there were tons of debates on whether or not her fanmail returns were authentic. Regardless, it doesn’t matter now; she is no longer signing fanmail. Several fans received letters claiming she is too busy to sign…

Norman Reedus is trying his best to answer all those boxes of fanmail that he received during shooting. You will see it very shortly. I have seen returns floating around within the last week!

James Earl Jones is returning fanmail sent to his UK production of Much Ado About Nothing. He had stopped signing for a long period of time… It seems like the fanmail is now reaching him once again. Good news for us!

Lastly, Billy Crystal is racking away on broadway! If you have sent, look in your mailbox, and if you haven’t sent, send away!

Secondly, a couple of new fanmail signers have appeared on the fanmail radar!

Henry Cavill has been returning old requests and supplying a SUPERMAN photo which he letter! I would send as quick as possible!

Please let us know your thoughts! We would love to hear them! Remember, do your research!

If you have questions, concerns, Ideas…
Email: TTMCentral at facebook.com