Collecting autographs can be such a weird and fascinating hobby. So- one of my most wanted autographs EVER has been the legendary Elton John. When he was touring the US about 4 years ago, I wrote to him at 9 different venues- realizing that concert arenas can be hit or miss (mostly miss) when it comes to autograph collecting. Almost 4 years passed, so I obviously had written off ever getting his autograph.

Then, a couple of days ago I get an envelope in the mail. I open it up and nearly pass out. After 4 years- ELTON JOHN personalized and signed my photo!! It’s further evidence that you just never know what will happen with this hobby! 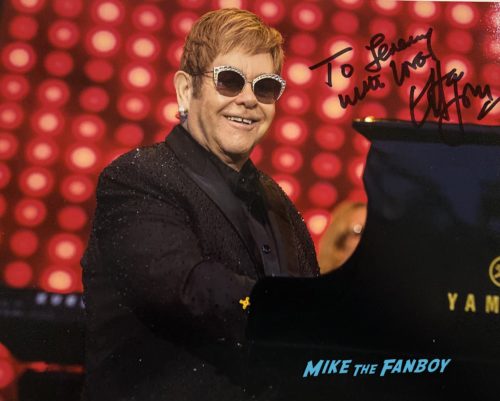 Then, on Saturday (day before Easter) we went to special viewing of the classic “Critters 2” movie with Director Mick Garris in attendance. He also directed one of my favorite weird films, “Sleepwalkers”. Mick was really cool and happily signed anything put in front of him.

You ready to try your luck? Some of your favorite have been signing up a storm this past week: