I think everyone has Walking Dead on the brain! The second part of the third season came back to the airwaves on Sunday and I know a lot of people were really excited! I for one am a huge Walking Dead fan. Love the show! I’ve gotten to meet most of the cast at Q and A events, the last premiere, and more so I consider myself really lucky!

Ace, took his love of the Walking Dead to the streets! The cold hard streets where only the USPS dared tread! This TTM Tuesday focuses solely on the zombie lovers among us! So, without further adieu I bring you, Ace and TTM Tuesday… The Walking Dead edition!

It helps if you say that in a spooky voice… Say it with me… So, without further adieu I bring you, Ace and TTM Tuesday… The Walking Dead edition!

See… Right? Check it out after the jump!

Things are looking up on the autograph front! I have been doing well on both the IP and TTM fronts… Hope all is well with you! I bet a lot of graphers are doing well out there! There have been a lot of people to get!

TIP of the Week: Pay attention to Broadway! TTMers must take Broadway to their advantage! We have a lot of all stars (Jesse Eisenberg, Tom Hanks, Alec Baldwin) heading to the stage, so stay tuned!

I have sent over a hundred TTMs in January, so for the time being, there will be a weekly article if all the forces allow it. All the readers at Mike the Fanboy: if there is someone you want to see an autograph return from, I take suggestions! Just comment down below! Just keep in mind of the likelihood/possibility of whom you are suggesting!

I have been doing SO well with the Walking Dead! In honor of the second half of the third season, most of the TTMs for today will be Walking Dead related! In January, I took up a zombie matte project! I am trying to get the most famous walking dead zombies on little blank cards. They have free range to do whatever they want! Different colors, sketches, inscriptions, and the list goes on and on! Eventually, as all these cards pile up, I will frame them together into this really HUGE matte. There are many people in the zombie community that did this after the zombie period of films! They would collect cards and photos from the original zombies of Night of the Living Dead! Overtime, they became very, very sought for! Therefore, for fun, I took on this amazing project!

Disregarding all that information, let us get on to the recap!

Producer of a number of box-office hits including The Terminator (1984), Aliens (1986) and The Abyss (1989). Of course, who can forget Tremors and the Walking Dead? She signed all my photos! She even switched up pens! They look amazing. Her work will stand the test of time! It was an amazing coincidence since I didn’t get her at a WD event that occurred earlier last week! If you haven’t checked out Billy’s Article, READ IT HERE! 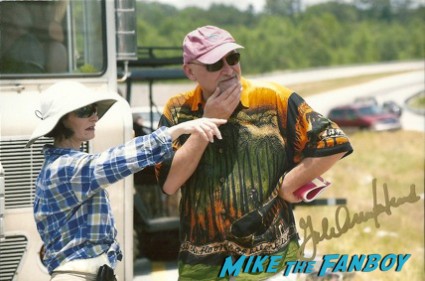 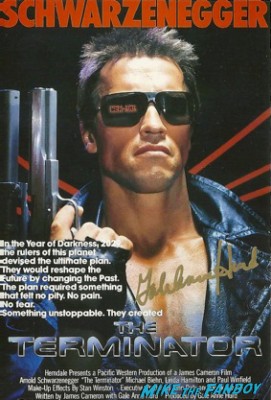 Giles is probably among the top 5 famous zombies on the Walking Dead. The famous zombies are most notable as “HERO walkers.” Not only has he been a zombie several times, but he also has been a Makeup and effects artist for the show. I can never pass a walking dead ad without seeing his notable “character!” I have seen him on magazines such as Rue Morgue and many times within Entertainment Weekly! (By the way, PICK UP your TV guide of the Walking Dead! I am shocked my buddy, Mr. Mikey, has not done a magazine pre-view yet!) Another fun fact for Giles: a few years back Joe played a zombie for the Thriller sequence of Michael Jackson’s ‘THIS IS IT’ set of shows… 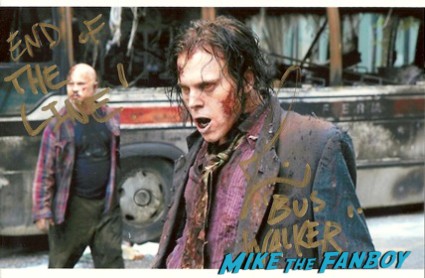 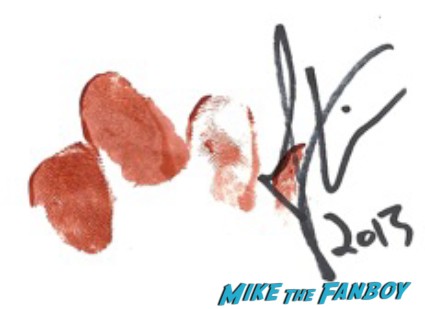 Another notable zombie for the walking dead! She is commonly known as the “Jawless Zombie.” I just thought it was SO NEAT that she drew a little jawless zombie sketch! Little things like that just make a TTM cool! 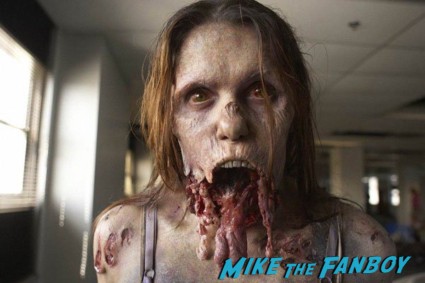 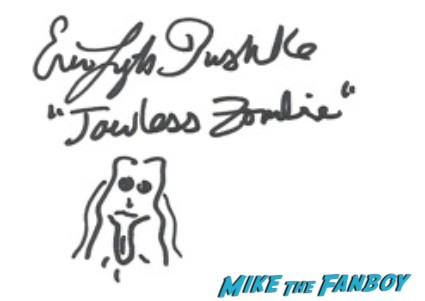 Michael has been a zombie numerous times throughout the Walking Dead! He was one of the walkers coming down the alley to investigate Randall’s screams from being impaled on the gate. He was later named a “Townie Walker” by Talking Dead. And then there was the season finale where he had to literally fall on top of Laurie Holden’s character Andrea. Remember when she is running away from all those Zombies? Just an awesome little success! 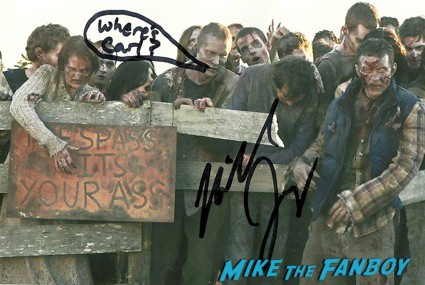 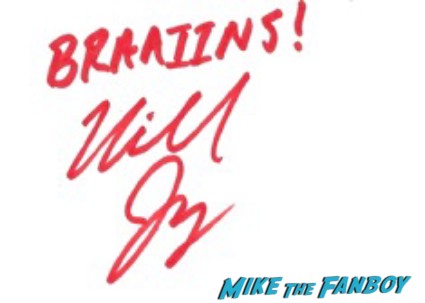 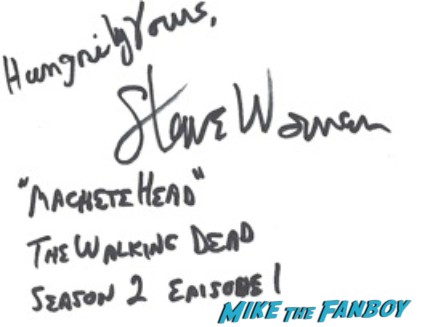 Now in my opinion, this will be an awesome addition to the zombie collection. She is notable for being the stand in, stunt double, and photo double for Chandler Riggs (Carl) and Madison Lintz (Sophia). She actually taught Madison how to be zombie! 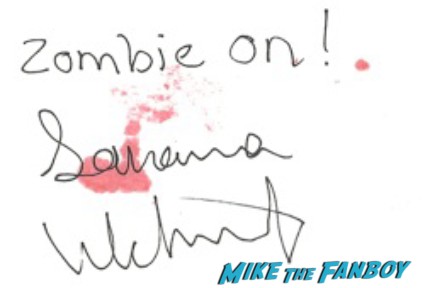