It’s TTM Tues! Can I get a Woooo Hoooooo….

For all of you Walking Dead fans Ace has an awesome treat! He did the dirty work and has some awesome cast addresses to share with you guys. I know, I know… The finale was Sunday and everyone is all sad.

Honestly, I’m not loving what they did, but I have to watch the whole thing again. And if you didn’t see it, I’m not going to spoil it for you. I just don’t know how they can keep the body count this high?!? Seriously.

Anyway, take a look at today’s TTM Tuesday below!

Today, we are addressing the WALKING DEAD frenzy in the air! OH MY GOD! We have to wait 7 more months until Season 4 comes out… Take out your tissues… I know… I am sad too. In honor of the season finale that swept the nation Sunday, Mike the Fanboy presents a Walking Dead TTM recap. I went crazy over the last 5-6 weeks by sending as many WD TTMs so I could write this article for you! I was very successful! At least, that’s what I think…

We are going to show a few of the recent Walking Dead successes happening over here at Mike the Fanboy! We are adding a fun new feature as well! Now, we will be providing addresses in correspondent to the person mention or show! (Note: If an address is not available to public or expired: It will not be posted) You need an address? Come check out Mike the Fanboy! 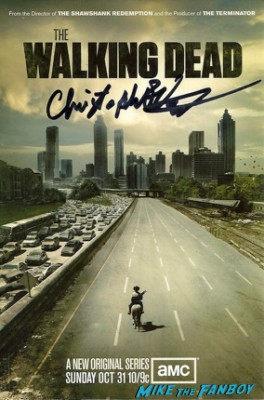 He played numerous zombies in three episodes of the first season of the Walking Dead. Fun Fact: He was Woody Harrelson’s stand-in in the film Zombieland! I really needed him for the Matte frame I plan to complete. As of now, I have over 15 cards signed by different zombies.

Please include a Stamped Self Addressed Envelope for all fanmail. 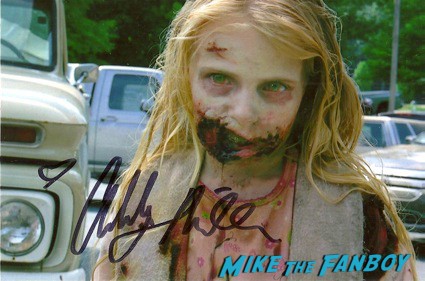 Another famous zombie! Remember her? She was the first on-screen zombie appearance in the Walking Dead. Recall the first episode of season one… The frightening little girl introduces hopelessness to the world in one swift BANG! 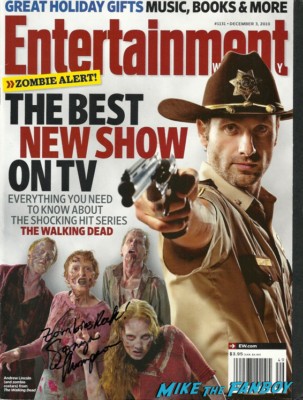 Man! Famous zombie after famous zombie! You will be seeing a lot of these as the articles progress. You may have seen her work in Season 1 of the Walking Dead. AMC used her heavily in all the advertising for Season 1. You could not pass a sign or bench ad without seeing her and another zombie played by Larry Mainland. She has debuted in several magazines since then and continues the zombie role in several films! Check out Zombieland! 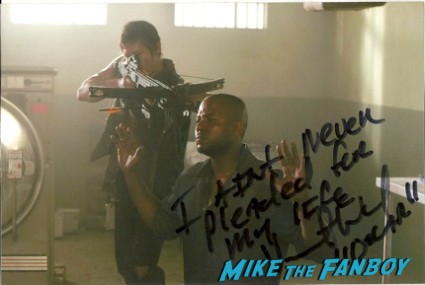 He portrayed Oscar in Season 3 of AMC’s The Walking Dead. He was so cool when I met him at the premiere of Season 3. Now, of course, no one at the time knew who he was… Sadly we lost him in a battle between the Prison and Newbury, but he was awesome while he was there… 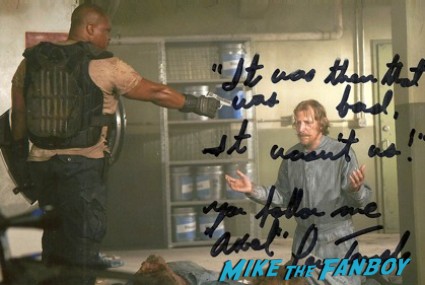 Another prisoner we lost too soon… Lew has done sooo many films and television appearances. His voice is recognizable in moments. He portrays Axel in Season 3 of The Walking Dead’s TV Series. Sadly, just as you sympathize with Axel’s background… BOOM… If you haven’t seen it, you will know what I mean… This article is turning into a Spoiler for all those who have not seen Season Three… Cough cough Mike Cough. You follow me? 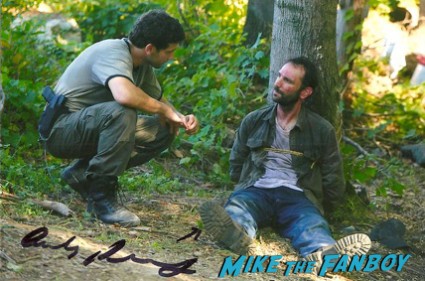 Portrayed Jim in Season 1 of AMC’s The Walking Dead. A rare autograph to get! Got him as I sent to a theatre appearance in New York! Sadly, the address has reached its demise! I was ecstatic to receive this in the mail though! He has appeared as a recurrent character in many TV Series, such as Agent Phil Schlatter on Weeds, and Malcolm on True Blood. 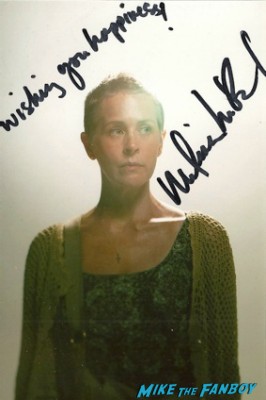 She is best known for her role as Sophia Peletier’s mother and Ed Peletier’s wife, Carol Peletier on AMC’s The Walking Dead (TV Series). I love Carol! I can’t wait to see the 4th season… I know that her relationship with Daryl will progress… You know you want it too… I hope she is around for a long time. 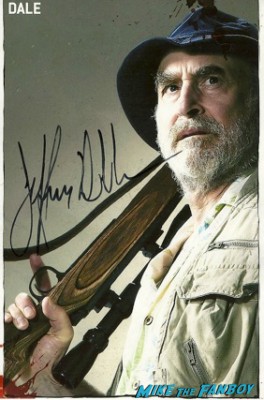 Someone who really left too soon: Among my top 5 favorite characters. DeMunn, in my opinion, is probably among the best character actors out there. Dale was such an amazing character. The writers gave him great depth! It was heartbreaking to see him go! 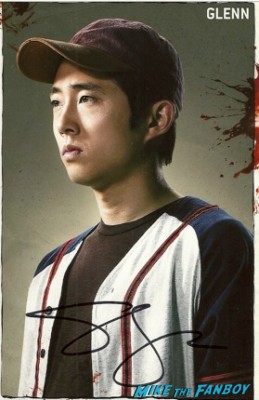 Yeun portrays Glenn in AMC’s The Walking Dead. Line of the season: Are you okay? Just a pretty awesome character… I am hoping we have a couple more seasons with him. He has really changed from that nerdy school kid to an actual adult.

Like the season three finale, this article has come to an end. That is it for today! Hope you guys enjoyed! Tune into next week’s article!