So, we reported several weeks ago that a stamp has come into play with Gene Wilder TTMs.

If you haven’t read the article, you might want to read it… https://www.mikethefanboy.com/ttm-update-gene-wilder-stamps-raise-questions/ 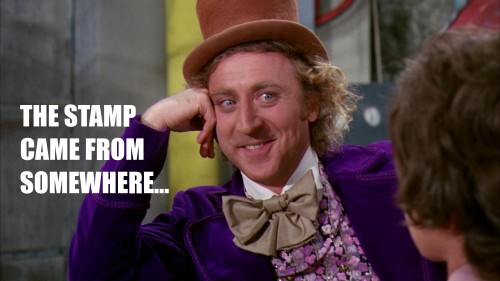 As we stated, the stamping trend raised some questions…

Many people have official full size posters, books, DVDs, and cast items that have been stamped. I would argue that the stamp ruined many of these fan’s collectibles. 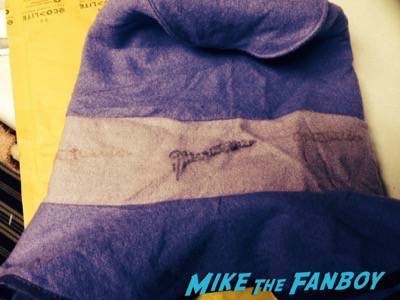 Our writers at Mike the Fanboy predicted it, and we would like to share the news with you. 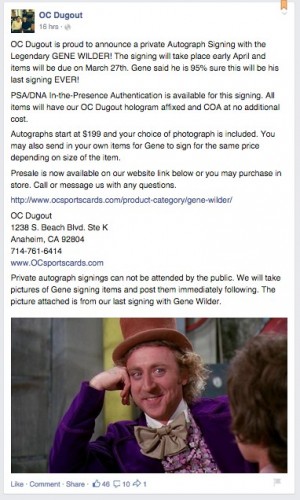 From their press release

OC Dugout is proud to announce a private Autograph Signing with the Legendary GENE WILDER! The signing will take place early April and items will be due on March 27th. Gene said he is 95% sure this will be his last signing EVER!

PSA/DNA In-the-Presence Authentication is available for this signing. All items will have our OC Dugout hologram affixed and COA at no additional cost.

Autographs start at $199 and your choice of photograph is included. You may also send in your own items for Gene to sign for the same price depending on size of the item.

Presale is now available on our website link below or you may purchase in store. Call or message us with any questions.

Private autograph signings can not be attended by the public. We will take pictures of Gene signing items and post them immediately following. The picture attached is from our last signing with Gene Wilder.

The timing, as we stated earlier, raises more questions.

We have to ask ourselves. Are private signings hurting the hobby?

The lack of reasonable prices prevent real fans from being able to own a piece of memorabilia. For many, TTM is the only method of obtaining their collection goals at a budget. I would argue the large majority of collectors do not have the same privileges that collectors who live in Los Angeles or New York have.

Private signings are creeping into play. Ultimately, changing the dynamic of the common autograph and the celebrity-fan relationship.  Signings are common, as of late, with the older generation of celebrities who no longer have a steady income. However, newer stars like Lea Michele have been introduced to the private signing game. Originally, it started with sports and has spread violently.

People need to ask themselves what they want to pay for an autograph. Prices keep rising… Collectibles essentially are not appreciating as fast as the prices rise.

I can remember even at a collector’s show you could go, have a good time and not drop $200. Now, it’s a different story. Where $20 was the norm per signature even for a smaller character actor. Now, it’s more like $40, if you’re lucky.

Paying $200 for a Gene Wilder autograph is quite possibly more than that signature will ever be worth.

Where is the fine line? When will it be too much?

I believe it is something we need to ask ourselves…