Starting Wednesday, San Diego becomes the pop culture center of the world with Comic Con’s five hectic days of movies, TV, comics and games. Out of the 200 TV-related panels, here’s my handy dandy little guide to help you prioritize your valuable time! 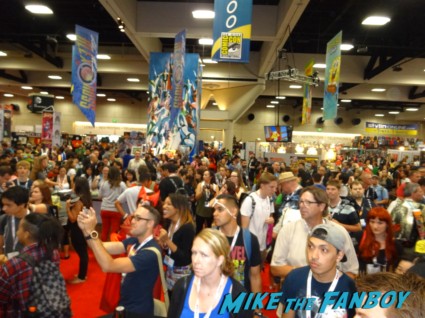 Screenings: Wednesday and Saturday nights are the big screening days, thanks to WB and DC!

Constantine is the new NBC show – just like the movie, but without Shia LaBeouf! No, not really, but both are based on the Hellblazer comic where Constantine (Matt Ryan) has been to hell and back and must defend humanity. (You can also catch the pilot during the Constantine panel on Saturday or catch a clip of the show with the cast during the DC TV Saturday Night extravaganza.)

We’ve also seen a flash of The Flash during Arrow last year. A spinoff of Arrow, this series tells the story of Barry Allen (Grant Gustin). So far, the buzz has been good so its’ worth catching! (The full pilot will also be shown in the DC TV Saturday Night extravaganza.) 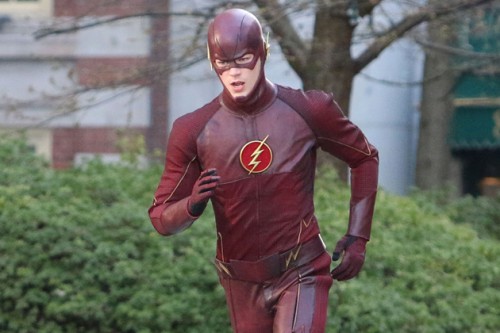 iZombie is the latest show from Rob Thomas (Veronica Mars) and based on a DC comic, this is the story of a zombie (Rose McIver) who works at the coroner’s office for easy access to brains. With each brain she eats, she also experiences their memories and tries to solve their murders. (You can also catch the pilot during the iZombie panel on Friday and a clip with the cast in the DC TV Night extravaganza.) 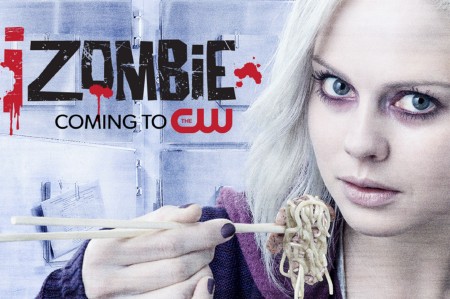 Teen Titans Go! will screen a new episode for the on-going series.

Screenings: A couple of the new shows will screen their first episodes during their panels.
Legends features Sean Bean as a superspy with many identities who suddenly questions his own. If anyone is looking for Sean, the whole airport will be blanketed in Legends advertising so it should be obvious. Keep an eye out for #Don’tKillSeanBean shirts and swag! 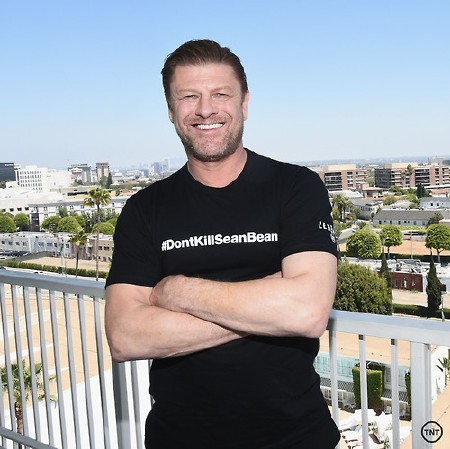 Scorpion is CBS procedural (A procedural on CBS? How unusual!!), but this one features a team of awkward geniuses. Since it features a more nerdy crew, CBS thought it’s appropriate for Comic Con. Uh huh. For Thursday only, the Nerdist installation at Petco Park will have a Scorpion candy tent where they’ll be handing out sugary treats as well as posters and other stuff. If you cruise the tent around 1:30 (give or take), you may also see the cast drop by for a visit.

24 is back for a panel to promote the upcoming DVD for 24: Live Another Day! Sound like a big effort for a relatively small purpose? Yep! There hasn’t been a renewal announcement, but this panel argues that Jack Bauer will have a bad day once again. Fox has recently said that there “are more stories to tell,” but they need to convince star Kiefer Sutherland who’s previously called this his last season. A visit to 4500 adoring fans should help! Hopefully they’ll keep to a 12 episode season since 24: Live Another Day was much more taut and focused than the previous seasons. 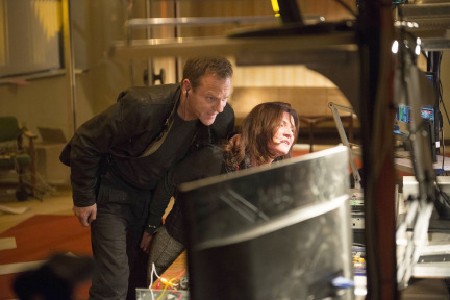 Teen Wolf is back with a bigger presence since the CBS booth is now an MTV booth! The cast is expected to drop by for signings throughout the weekend so inquire within! 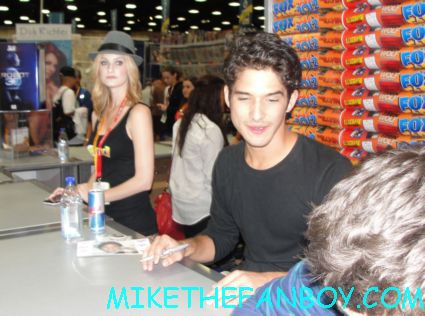 Comic Con virgins! A bunch of shows are making their San Diego debut including: Reign, Witches of East End and Penny Dreadful. Of the three, Witches is bringing the full cast so it should be a lot of fun! 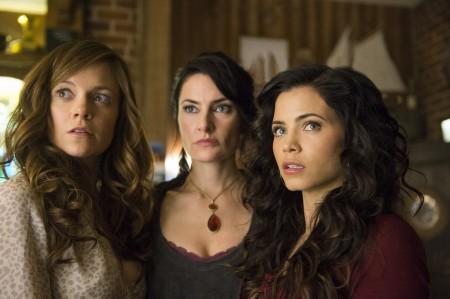 Fannibals unite for Hannibal is headed back! Strangely, a lot of the marquee cast names are not attending, but any morsel is likely to whet the appetite for fans!

Outlander! If you haven’t heard about this show yet, you must be a new reader! Outlander is an adaption by Ron Moore of the best-selling books by Diana Gabaldon. A World War II nurse suddenly finds herself traveling backwards 200 years in the highlands of Scotland. Epic, sweeping stuff! This world premiere screening is ticketed and offsite, but check out the panel section below a chance to win tickets! 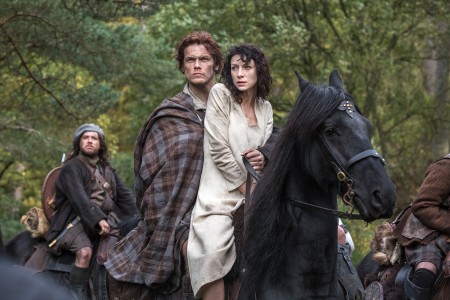 iZombie rises again! Get a second chance to see the pilot during its own iZombie panel.

Wayward Pines is M. Night Shyamalan’s attempt at Twin Peaks. As usual with Shyamalan, the 2 minute trailer looks intriguing, but he usually fails when it comes to a creating anything longer (say a 2 hour movie). How’s he going to work a 10 hour TV show? Here’s hoping that the impressive cast (Matt Dillon, Melissa Leo, Carla Gugino, and Terrence Howard) knows that this is a good one.

Top panels: Some BIG shows may be in Hall H, but there’s some really intriguing stuff in room 6A so don’t neglect that room!

The Walking Dead will debut a new trailer (which will also be available online afterwards) and give a hint on their darker season coming up. If you can’t get to the panel, then you can always be chased by zombies (The Walking Dead Escape at Petco) or eat like one at The Walking Dead BBQ. Tweet a selfie of yourself and the Terminus map and then line up at the Hilton Gaslamp to be one of 200 people wristbanded at 9 am for a little shindig on Friday or Saturday night. 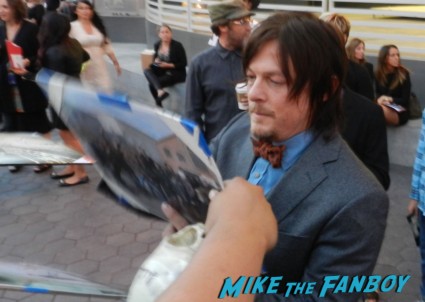 Game of Thrones is just starting production on the new season, so there may not be any clips. We may get some casting announcements and a lively look back since some dead folks are on the panel (The Hound, Ygritte and The Red Viper), and we have a Stark family reunion with Jon Snow (Kit Harrington), Sansa (Sophie Turner) and Arya (Maisie Williams). Bran (Isaac Hempstead Wright) is in town to support The Boxtrolls so he may also show up as well. Game of Thrones will have an off-site across from the Omni hotel and will also be featured in an HBO pop up shop at Market Street and 8th. 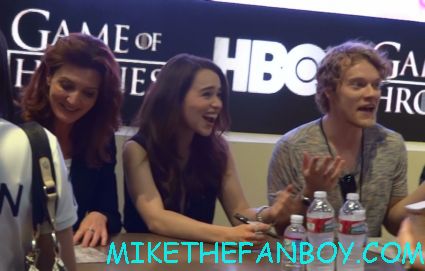 Outlander is not screening the pilot at the panel, but they will be giving out several pairs of tickets to the world premiere! I’m going to guess that there may be a lot of book spoilers discussed so attendees should be cautious if you hate being spoiled.

Bates Motel will rent the 6A room for an hour-long panel. This show wouldn’t work if Vera Farmiga and Freddie Highmore weren’t so terrific so their insights are always intriguing. 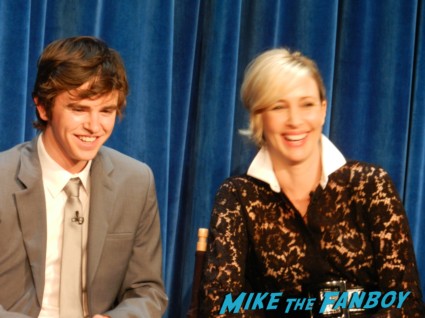 Vikings take over the room next! The Mike the Fanboy family are big fans of this show. Don’t forget to stop by the Vikings off-site installation where you can star in your own Vikings video. 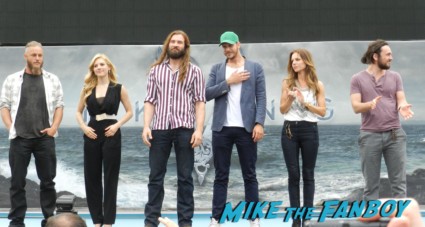 Orphan Black gets a bigger room this year! At twice the size of last year’s room, and twice the number of cast members, this should be a blast. The show is also hosting a get together at the Orphan Black Meet Up earlier in the day and the cast will be chatting for charity at the Nerd HQ Orphan Black conversation on Saturday — if you managed to snag tickets in the first 10 seconds they went on sale! 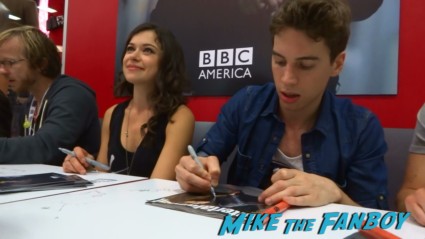 Marvel is featuring Agents of S.H.I.E.L.D. and Agent Carter together on their TV panel. Perhaps we’ll also get a surprise visit from Daredevil (Charlie Cox, Vincent D’Onofrio, Rosario Dawson and Deborah Ann Woll) since that show is in production for Netflix. Half the cast is around anyway…!

The horseman rides again! The cast of Sleepy Hollow is back in this world for a panel –the cast and creators are naturally hilarious so that pretty much guarantees a fantastic panel! Also head on out (ha ha ha!) to the Sleepy Hollow Virtual Reality Experience in the Petco interactive zone where you can virtually get chased by the Headless Horseman. The cast will be dropping by to experience it themselves on Saturday at noon. 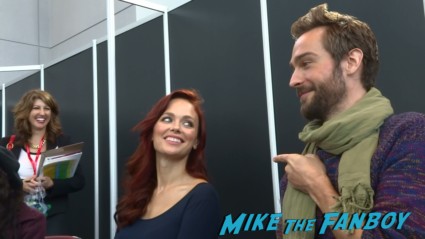 The full cast of Arrow (including new full-time cast member John Barrowman) will be in town to reveal some new secrets for the season. 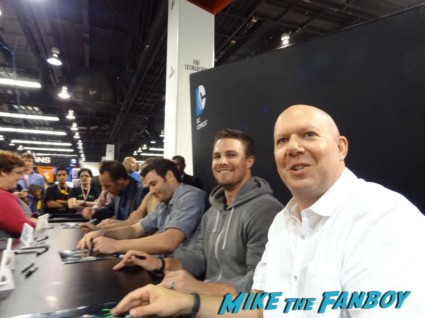 There are also panels for The Big Bang Theory (writers only), Bones, The Originals and Archer. 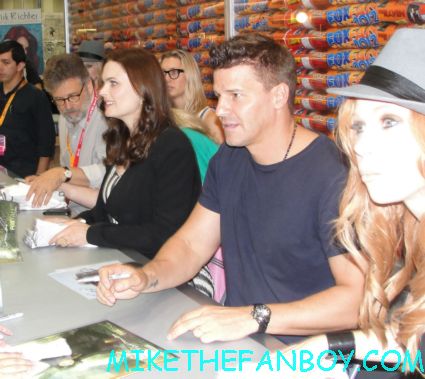 Saturday
Screenings: The other big day of screenings!

Constantine will also screen the pilot during its panel. If that’s not enough Hellblazer for you, there is a Constantine cosplay contest which gives you a chance to take a photo with star Matt Ryan and an exclusive variant cover comic. Grab your trenchcoats and cigarettes and meet at 4 pm at Gaslamp Square!

In an unusual move, the four new DC-related titles are getting a cross-network showcase hosted by the modest, self-proclaimed “winner” of this year’s Comic Con, Stephen Amell. (So glad he’s staying grounded!) The fun will include your only chance to see Fox’s Gotham pilot (rave reviews so far!) as well as The Flash. There will be clips of Constantine and iZombie with cast and creators from all 4 shows. For more Gotham fun, grab the zipline to fly over the rooftops like Batman (who doesn’t exist yet in Gotham). The cast is also expected to drop by the zip line (time TBA). 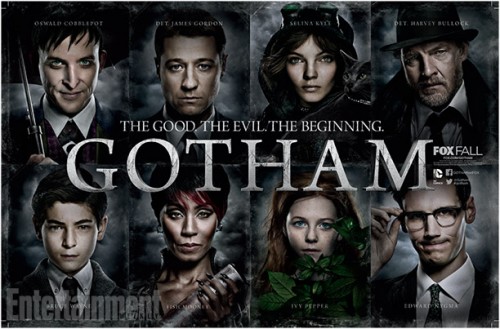 Say goodbye to Bon Temps! It’s the final chance to greet the cast of True Blood as the series ends next month. (Side note: I met Mike the Fanboy at the first ever True Blood signing, months before the first season came out). For this last go around, most of the core cast will be there except for Alexander Skarsgard, Ryan Kwanten and Joe Manganello. True Blood is sponsoring the Blood Drive and Masquerade so there aren’t any major offsite experiences, but you can shop the HBO pop up shop on Market and 8th and pick up some True Blood stuff. 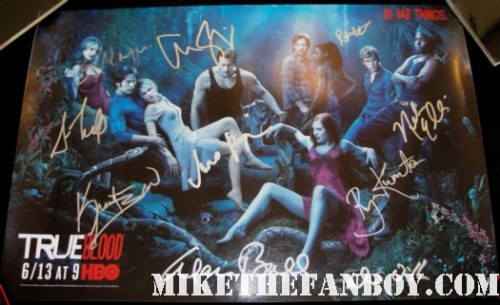 The Blacklist with Ultron, er James Spader! Yes, Reddington is making his first trip to San Diego…probably on his way to Hall H and the Avengers panel afterwards. If the panel conversation is half as fun as his character, it should be quite amusing! 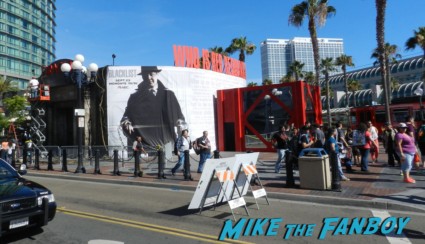 Other fan favorite shows will also hold their panels including: Once Upon A Time, Grimm, Person of Interest and The Vampire Diaries. 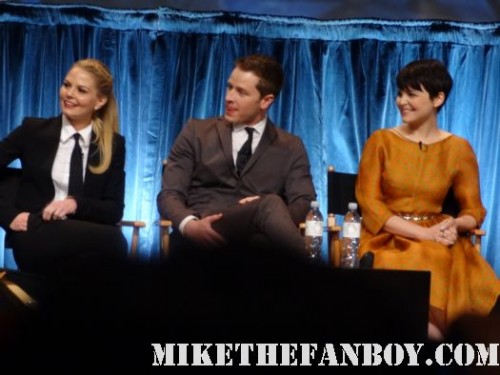 Top panels: While Sunday is Kids Day at Comic Con, the TV programming is counter-programmed with some darker material.

Supernatural continues with its traditional Sunday appearance, this time with the Winchesters (Jared Padalecki and Jenson Ackles) and fan-favorite Castiel (Misha Collins). 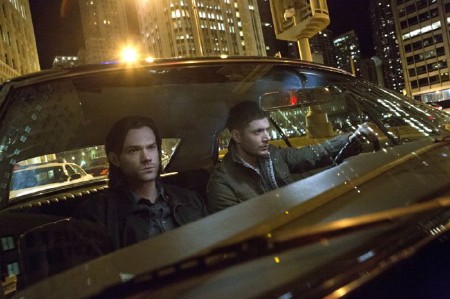 Sons of Anarchy is another show on its farewell tour! The final season starts September 9th so this will be the last time Sons of Anarchy can close out Comic Con. FX has been great about bringing the full cast each year, but Charlie Hunnam may be there virtually since he’s on location elsewhere. (We have conflicting info on this…) 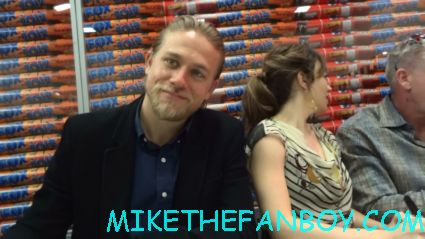 For Sunday, I’m most excited about newcomer, The Strain. Guillermo del Toro is a fan favorite for many reasons, including his ability to command the stage with a room full of fans. He’s amusing, passionate, articulate and just a lot of fun (think foul-mouthed, teddy bear visionary). He’ll also be joined by the full cast and showrunner Carlton Cuse so don’t miss this one! Also, on Saturday night there is a Strain screening/party at the Reading Gaslamp Cinemas at 7:30. Props and giveaways! Collect all 3 wristbands from the Fox, Dark Horse and Harper Collins booths for special VIP access one hour earlier. 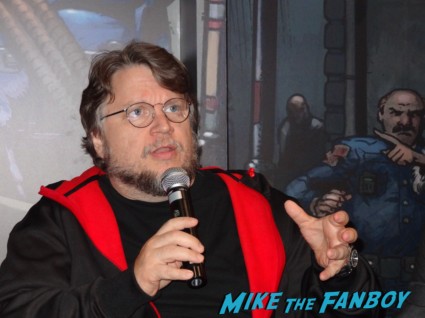 Not enough for you? There are panels sponsored by Entertainment Weekly and TV Guide which feature many TV stars and creators so check those out as well!

Remember to visit the various studio booths (WB, Fox, ABC, BBC America) for additional swag and, of course, the signings. Every signing is ticketed, but each show has a different method so ask (politely!) for details.

Also remember that there are lines for EVERYTHING and you need to pace yourself and have a backup plan! For more up-to-the-minute updates on what’s happening at Comic Con, follow the Mike the Fanboy crew!