Happy holidays everyone! I have some presents to give away!

That’s right! Who wants to take home some swag? I’m holding a contest to give away a variety of promotional items from Outlander, Orphan Black, Arrow, Sons of Anarchy, Glee, Doctor Who and more!

This giveaway is going to be a little bit different since not only do I have a grand prize, but I’m also giving away some runner-up prizes! Yes, there will be MORE than one winner!

Oh, and the runner up prizes are available INTERNATIONALLY!!!

The Good Stuff! The Swag!

So what’s up for grabs? A whole bunch of exclusives from San Diego Comic Con, New York Comic Con, Fan Expo Canada, etc… Yeah, I’ve been to a lot of cons in the past couple of years! Here’s the breakdown on the grand prize by each of the shows:

Whew! Quite a bit of stuff, right? Unfortunately this grand prize is available to the US only. 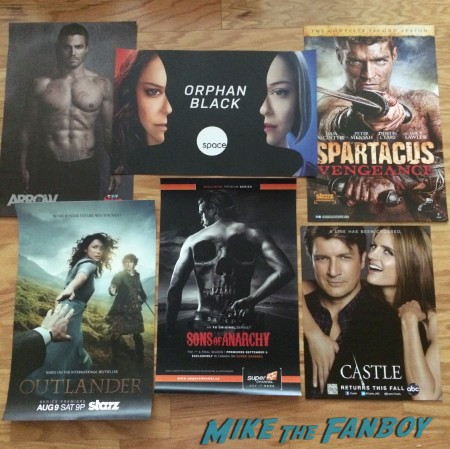 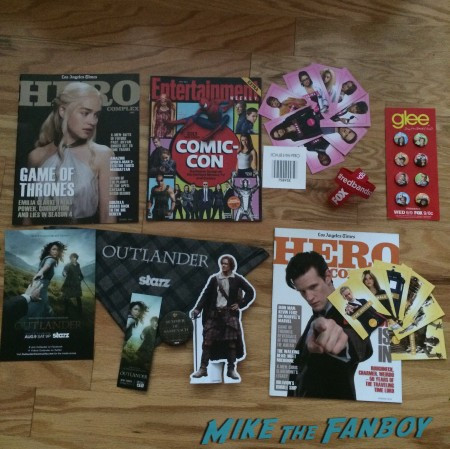 Pick me! Pick me!

The process to enter is simple:

1. Sign into Rafflecopter (see below)
2. Comment on your favorite moment of the past season for one of the shows featured in the grand prize.

Ta da!! You are now entered to win the grand prize!

For more chances to win, you can use Twitter and Facebook for additional entries. You can even tweet daily if you really want to increase your chances! See, that isn’t so hard, right?

What about the additional prizes?

To qualify for a runner- up prizes, it’s in the same Rafflecopter, but you need to comment and tweet the name of your favorite show. Why? Because this will help me figure out who’s a fan of each show. I want to make sure the right swag goes to the right person,  so I will randomly select the runner-up prize winners among the show’s fans. Yes, this is where the contest is a bit different!

You can pick multiple shows or you can concentrate on just one. There are a limited number of runner-up prizes so not all shows will have a runner-up prize and not every item is available.  (No, I’m not tell you in advance which shows are available for runner up prizes.) Well, I will say that there is a runner-up Outlander prize that’s available INTERNATIONALLY. I’ve had several people request this so here’s your chance!

Since I am selecting the runner-up winners among fans of that particular show, I need your comments and tweets to mention the show in such a way that it will show up in Rafflecopter. So just make sure you do the following:

Outlander – Frank and Claire at the train station!
Orphan Black – Family Day and Vic with all the glitter!

On Twitter, you have a chance to tweet daily for the grand prize and each tweet also counts towards the runner-up prizes. Just mention one show in each tweet. Each tweet counts as a single entry for the runner-up prizes. So rotate your favorites or just concentrate on one show. Either way, each tweet should mention the show first and include the link to this post. You don’t have to mention your favorite moment in your tweet (there’s just not enough real estate), but I will be reading these and may just give away bonus entries if I like your tweet. Maybe!

So really, it’s just like any other giveaway, but you should mention specific shows you love WITH THE SHOWS’ NAME MENTIONED FIRST (see example above). That’s all!

(If you don’t follow the format, I can’t read your entry for the runner-up prize since the raffle program previews on the first couple of words. So make sure you mention the shows first!)

Any questions? If you have any, please email me since your comment towards your giveaway entries. With the holidays coming up, this contest will run for three weeks and end on January 10th.

I’ll also be doing giveaways for Outlander and for Orphan Black when those shows start up in April so there’s more to come!