It’s that time of year ago! Back to school sales are winding down, people are having their last hurrah during Labor Day and stores will soon be blitzed with Halloween/Christmas displays! It also mean networks are gearing up for the new fall TV season and we’ll soon be hit by a blizzard of new and returning shows. (If you haven’t cleared out your DVRs, now is the time.) The big blitz will be in mid-September, but new shows will start debuting next week.

What shows are you most looking forward to seeing the most?

It helps if you know what new shows the networks are serving up, right? Here’s the rundown on the new shows debuting through November!

A to Z (NBC)
Pitch: A comedy produced by Rashida Jones where Cristin Milioti (HIMYM) and Ben Feldman are opposites who fall in love.
Debuts: October 2 and available now on Hulu
Time slot face off: Scandal, Reign, Gracepoint, The McCarthys

Ascension (Syfy)
Pitch: This miniseries takes place aboard a ship on a 100 year journey to start a new colony. The journey is not smooth! Tricia Helfer stars, but not as a Cylon.
Debuts: November 24

The Chair (Starz)
Pitch: Two directors give their take on the same material each week.
Debuts: September 6

Constantine (NBC)
Pitch: Based on the Hellblazer comic and produced by David Goyer (writer for the Christopher Nolan Batman films), Constantine is a detective who’s been to hell and back (literally). He questions his faith as he battles angels and demons.
Debuts: October 24
Time slot face off: 20/20, Blue Bloods, Z Nation

The Flash (The CW)
Pitch: Speedy dude fights crime in Starling City.
Buzz: The CW is banking big on this series – enough to “leak” it for the public and to plan several crossovers with Arrow’s good and bad guys.
Debuts: October 7
Time slot face off: NCIS, Selfie/Manhattan Love Story, Utopia, The Voice 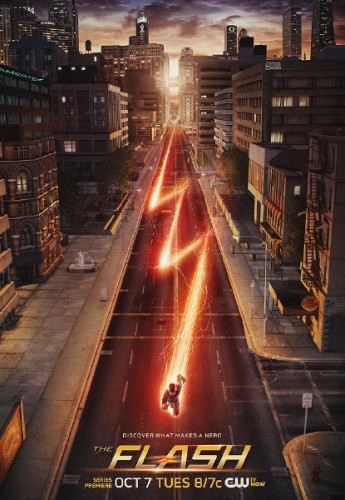 Forever (ABC)
Pitch: Brainy medical examiner Ioan Gruffudd aids the police in their investigations while he tries to figure out why he is immortal.
Buzz: Forever may not go on forever since it’s in a tough timeslot (every ABC show in that time slot got cancelled last year)
Mini-review: I really like Ioana Gruffudd, but Hollywood never seems to know what to do with him. Here he gets to be smart and charming which is right up his alley. I enjoyed the pilot and will watch the show, but I’m not sure if it’s got a lot of legs on it.
Debuts: September 23 and available now on the Watch ABC app.
Time slot face off: Person of Interest, Chicago Fire

Gotham (Fox)
Pitch: Bruce Wayne (David Mazouz) grows up and Jim Gordon (Ben McKenzie) fights crime until he does. An origin story for Gotham (not Batman).
Buzz: Off the chart and Fox is pushing this one like crazy
Mini-review: Lots of potential here and the pilot is good, but it didn’t knock it out of the park. A lot of time is spent setting up the fleet of characters and the world of Gotham so it’s missing a bit of heart. The cast is bigger than Batman Forever with Jim Gordon, his partner Harvey Bullock, tech guy Edward Nygma (Riddler), crime boss Fish Mooney, her henchmen Oswald Cobblepot (later Penguin), Bruce Wayne, Alfred, Ivy Pepper (later Poison Ivy) and Selena Kyle (later Catwoman). Pilots are tough so that heart may come later (or it may not be on the agenda at all). Regardless, there’s lots of potential with a well-committed cast (all the villains/future villains are having lots of fun) and it looks great so I’ll be watching!
Debuts: September 22
Time slot face off: The Big Bang Theory/Mom, The Originals, Dancing with the Stars, The Voice, 2 Broke Girls

Gracepoint (Fox)
Pitch: David Tennant and Anna Gunn investigate a young boy’s death in a small town.
Buzz: This is a US adaptation of a well-regarded UK series, Broadchurch. While Gracepoint has the same star (David Tennant) it will have a different ending. Given the UK kudos, this US version is ready for Emmys with a cast that includes Jacki Weaver and Nick Nolte as well.
Debuts: October 2
Time slot face off: Scandal, Reign, Bad Judge/A to Z, Two and a Half Men, The McCarthys 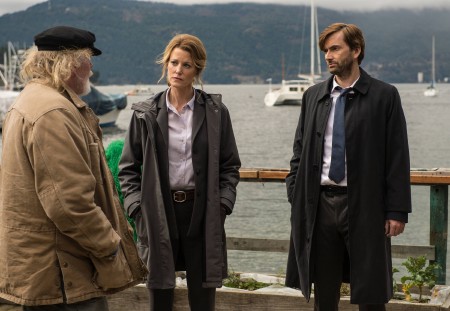 How to Get Away with Murder (ABC)
Pitch: Producer Shonda Rhimes (Grey’s Anatomy, Scandal) monopolizes ABC Thursdays with Viola Davis staring as a law school professor.
Buzz: Shonda and Viola? Expectations are really high on this one.
Debuts: September 25
Time slot face off: Parenthood, Elementary

Jane the Virgin (The CW)
Pitch: Newcomer Gina Rodriguez stars as a young girl from a traditional family that gets accidentally impregnated by her doctor.
Buzz: While most critics are not expecting this show to last, star Gina Rodriguez is getting love letters for her star turn.
Debuts: October 13
Time slot face off: Sleepy Hollow, Scorpion, Dancing with the Stars, The Voice

Madame Secretary (CBS)
Pitch: Tea Leoni is the US Secretary of State in this drama produced by Morgan Freeman.
Debuts: September 21
Time slot face off: Once Upon A Time, The Simpsons/Brooklyn Nine-Nine

Red Band Society (Fox)
Pitch: Octavia Spencer and Dave Annable care for seriously ill kids who live at the hospital.
Mini-review: Funny, dramatic and worth watching! While you may expect a tear-jerker like The Fault in Our Stars or If I Stay (all about dying teens), this has the same sort of humor as Glee, but manages to balance out with serious moments as well.
Debuts: September 17
Time slot face off: Criminal Minds, The 100, Modern Family/Black-ish, Law & Order: SVU

Selfie (ABC)
Pitch: My Fair Lady modernized. Karen Gillan has social media but not IRL social skills which she’ll learn from straight-laced John Cho.
Mini-review: This is messy – the focus of the pilot is all over the place and not very funny. Karen Gillan is likeable and in great shape (as the skin-tight outfits and slow pan over her scantily-clad body show), but it’s hard to believe anyone that socially unpleasant would be the best sales person at a company.
Debuts: September 30 and available now on Hulu and the Watch ABC app
Time slot face off: NCIS, The Flash, Utopia, The Voice

What shows are you looking forward the most! Inquiring minds want to know!! Take our quick poll and see if your top choices match other Mike the Fanboy readers!

Throughout the month TV Heartbeat will be giving away lots of swag including t-shirts, limited edition posters and, oh, yeah, a signed poster from Sleepy Hollow!