In January, MTV will be bringing one of the most popular fantasy world’s to life. With nearly 30 books in the best-selling series, Terry Brook’s Shannara series will get the full-fledged Game of Thrones-level treatment in The Shannara Chronicles. The cast and creators came out to New York Comic Con to talk about creating this beautiful new world.

“Miles and I were sent the book 2.5 years ago,” begins executive producer/writer Al Gough, referring to Miles Millar, his producing partner on Smallville. “We weren’t as familiar with Shannara Chronicles and they sent us Elfstones. It had a great story and that’s what differentiates Terry Brooks. A lot of fantasy books are 800 pages with 200 pages of story. Terry’s books are story from beginning to end. So when they sent it to us and we read it, we thought ‘Other than Game of Thrones, there’s really no other show playing in the fantasy space.’”

The Shannara Chronicles is based on the second Shannara book, the Elfstones of Shannara. After the apocalypse, humans have evolved into different species like elves, trolls and gnomes. There was a great battle to vanquish evil demons from this world, but that ancient magic is crumbling. In a quest to repair the magic, we meet the last druid Allanon (Manu Bennett) and a half-elf named Wil (Austin Butler). 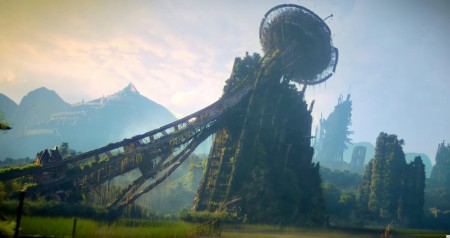 “This is a true fantasy show,” agrees Miles. “We looked at what’s not on television. There’s nothing like this on television. The last thing we want to do, having done 10 years on Smallville, is to do another superhero show. How do we challenge ourselves as creators? As writers? As producers? We saw this as a genre that really touches people. You can’t do it properly, until now. People will see what we’ve achieved through director Jonathan Liebesman and his incredible knowledge of special effects and visual mastery. The first two hours of this show? It is a movie. It’s better than any movie I’ve seen this year. Great story, Epic filmmaking in terms of the look and feel and the scope of the show.”

Something on this grand a scale may seem a bit odd for MTV, but, as Al says, “They loved it. We kind of went in and said ‘This is what we’re doing; a mix of fantasy and science fiction.’ That was a real selling point to them. It didn’t scare them. They didn’t run away from it. And this is pure fantasy with elves and trolls and gnomes and things like that. It’s just a good story, well-told.”

It may seem odd that they chose the second book to start the show, but the original series of books are self-contained and focused on different generations. Miles and Al wanted to start with Elfstones of Shannara since, as Al puts it, “Of the original trilogy, it’s the strongest book.”

Miles expands on this: “It’s got a great ending. We read that ending and that was a great seasonender for us for season one. It’s so emotionally satisfying. It’s a great conclusion of an epic quest. It felt very original; I didn’t see it coming. It’s always great to be surprised by a book.”

Author Terry Brooks is a producer on the show and, Al reassures us, “Terry’s on board and he’s part of theprocess.” Terry is also one of the nicest people on the planet (see my earlier post on the Shannara Chronicles signing and screening at NYCC).

“From the beginning,” describes Miles, “he’s appreciative and also understanding that a book is a book and a TV series is a TV series. They’re very much different beasts and they have to live their own lives. Obviously we want to be very true to the legacy and the fans of the books who have grown up with them. We are deeply respectful and want them to be happy and we want Terry to be happy. It’s its own beast and we can’t afford or fit all the books and all the elements and characters and the journeys of each book into the series. What we captured, and I think Terry would agree, is the essence of the book. The feel of the book. The scope of the book. It has an innocence and a purity. The heroes are the heroes and there’s a lot of stuff that Terry has shown us and it’s been a great, great partnership.”

Al affirms that Terry “stays involved. He reads the scripts and he gives us his thoughts. It’s been a good collaboration.” Terry is busy releasing a new book each year and, at this time, there’s no plans for him to write an episode.

Speaking of scripts, director Jonathan Liebesman is making his TV debut where he noticed some differences versus his background in big feature films: “In TV, you have a screenplay before you start shooting which, right now in movies, is unheard of. Basically in movies, you invent. Most big budget films, your screenplay happens after someone transcribes the edit of the movie. You’re like ‘Oh! That’s the first time I’ve ever seen a completed script. That’s cool.’”

So not only was he grateful for a script, but he also liked the different emphasis: “What’s great about television is the focus is always on the characters. In a way, the visual’s role is second which is good. That’s why TV is better than movies right now. There’s some great films, but there’s a lot more greater television. I’d be setting up a shot and I’d have producers telling me ‘Make sure to get the performance’ as opposed to ‘Can we make this cooler? Can we have more stuff going on?’”

Jonathan also wanted to make this fantastical world as real as possible: “We’re always cutting the amount of visual effects shots. In movies you have, sometimes, 30, 40 weeks to work on one shot. We don’t have that time.” But he also reduced the effects because “the more reality and interaction your actors have, the more that will come across.”

Miles adds: “We built practical sets and big sets. The palace set, that’s is huge. The Ellcrys [a giant tree], that is huge. And you get that sense of scale, but also that sense of authenticity. Because, guess what? It’s real. There is a tree that’s trunk is 30 feet long. It’s epic.” 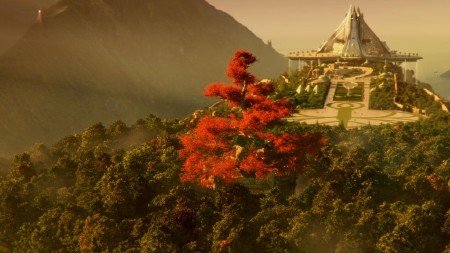 Since Shannara talks place in a very different world, the design is critical to the show. Miles describes their process: “Everything, every button, buckle, is unique and made for the show. And that’s the great thing about shooting in New Zealand, you have a legacy of Lord of the Rings craftsmen of impeccable standards. If the three of us [Miles, Al and Jonathan] agreed on something, if we saw a creature design or a concept of a creature design, if only two of us thought it was good, then it was gone. Only if all three of us agreed that it was great did it go forward.”

Jonathan admits that “It was a very expensive attitude. But I think that’s why it looks like it does. I’m not saying because you spend money, but we didn’t compromise and we really pushed each other, because the bar is so high with shows like Game of Thrones. It’s really beautiful.” 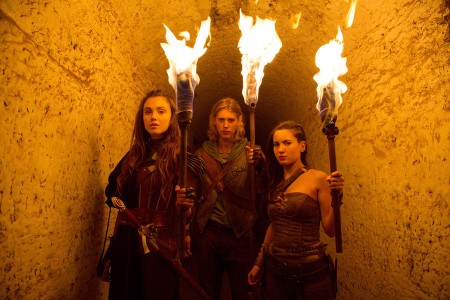 The core characters includes Wil Ohmsford, a half-elf who’s “basically at the lowest part of his life,” describes Austin Butler. “He’s just lost his mom. He goes on his journey which he thinks is going to make him feel better and that’s to become a healer. And then he gets pulled off that journey by Allanon, the druid, who says ‘that’s not your destiny you need to save the world.’”

Since Wil has lived a simple life in the country, Austin explains that Wil is not prepared for this journey: “In the beginning, he still hasn’t found the hero in himself. He gets beat up. He gets stronger as the story progresses.”

Wil’s struggle to adapt to this new place is what drew Austin to the part: “The main thing was reading the script, seeing the relationships and feeling for Will; Feeling for being a fish out of water, that feeling of not knowing if you’re good enough to handle the things that are in front of you. I definitely know that feeling intimately. That humanity in him is what called me the most.” 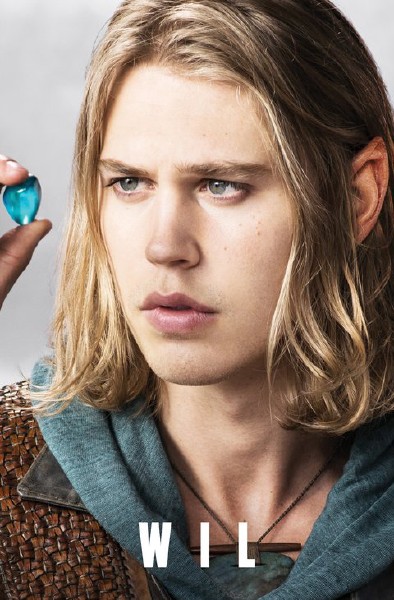 Allanon, the last druid, is played by Manu Bennet who was in familiar territory, in more ways than one. “I’ve had these roles where I take somebody who’s innocent and have to lead them into something that’s darker. I personally find that challenging. As an actor, I came into this place because I lost my mother and brother in a car accident when I was young. I know pain. Knowing that Austin came into the series having lost his mother only several months before the show started, it was almost like this magic combination because I’ve been through that. And knowing that he was going through it, brought a real sort of grounding to the relationship between Allanon and Will.”

But there were a lot of other parallels for Manu who just made the move to Hollywood and “the first audition I had was for Shannara. I said ‘Where are you going to shoot?’ and they said ‘Oh, we’re shooting in Auckland, NZ.’ So it was like a boomerang job for me. The crew are almost a blueprint of the Spartacus crew. I’m back in familiar territory which is great. To be grounded, as much as I can be as an actor, it gave me firm ground to stand upon and play Allanon. For the other guys, it was a whole new journey.” 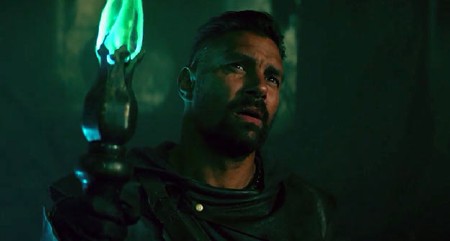 But there are some differences for Manu who wryly states, “this time my character is actually good, I’m not going off on some kind of Mirakuru craziness.”

Wil and Allanon’s journey will also involve Amberle, a headstrong Elven princess (Poppy Daryton) and Eretria (Ivana Banquero), a gypsy-ish Rover who can take care of herself. Both women are more capable than Wil at the start of his journey. “Women are bad ass,” enthuses Austin. “I love that. It’s kind of cool in this. It’s swapped. It’s not the damsel in distress. It’s me being the guy, not knowing what he’s doing and the girl is kicking ass and helping me through things some times.” 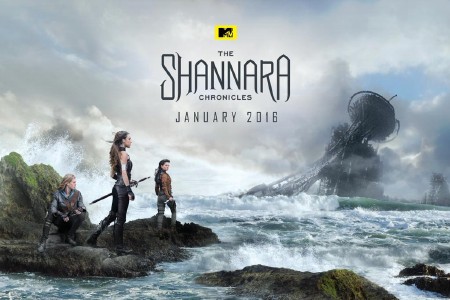 Both guys want to do justice to these characters. Manu muses: “It’s a responsibility to represent Terry Brooks. I mean Terry Brooks has sold 21 million copies of this story and people are expecting a lot from it. The only thing I can give is the truth, and Austin as well. The actual persona and this role that he’s playing is so consequential because it’s so close to the truth.”

During filming, Austin had lunch with Terry where “he’s so lovely in the way that he passed the torch and said ‘I understand you’re going to make this your own’ and he gave his blessing and that was awesome. He empowered me by allowing me to trust myself. That was powerful.”

The Shannara Chronicles will begin on MTV on January 5th. (Definitely tune in!!)