Home / Conventions • Interviews • The Lovely Erica • TV Heartbeat / TV Heartbeat Interview! Chatting with the Cast and Writers of Sleepy Hollow at NYCC! Witness Where This Season is Headed! Guess Who’s Coming Back?

Season 2 of Sleepy Hollow started off like a gunshot and hasn’t slowed down since. Lucky for us, the cast and writers of Sleepy Hollow took a break to talk to fans during New York Comic Con (NYCC). Executive producer/director Len Wiseman, show runner Mark Goffman, writer Raven Metzner and stars Orlando Jones (Captain Irving), Lyndie Greenwood (Jenny Mills) and Sakina Jaffrey (Sheriff Reyes) give us some insight into what’s makes this show tick and what’s in store for this season! 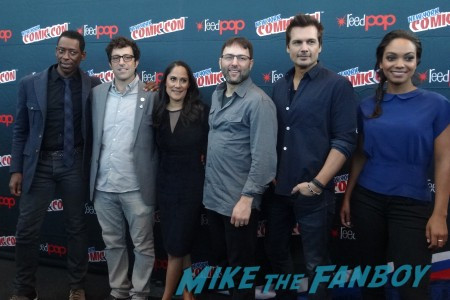 Sakina Jaffrey is happy to be the newest resident of Sleepy Hollow. “I was fighting for my life to get the part!” she laughs. “When I see them all having fun in that supernatural world, I just want to dive in. But we’ll see!”

As a new character, but one with a long history, there’s a lot we still have to learn about Reyes. Sakina talks about Reyes’ mindset “My father had worked in Sing Sing and things happened to him while he was there that had a profound effect on my life. I come from a law enforcement family in Sleepy Hollow and I think that event that happened in Sing Sing has definitely colored my need for order.” 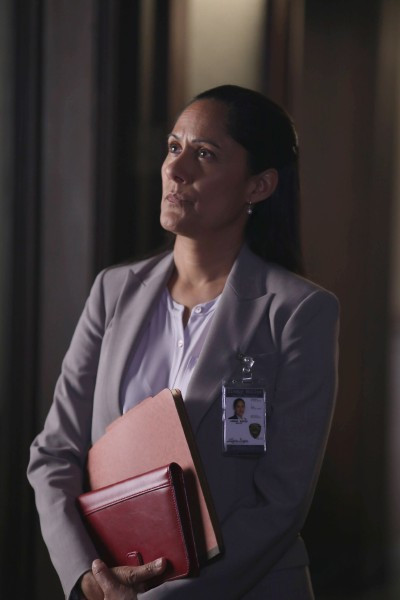 That said, Sakina explains that Reyes isn’t all about order and feels the consequences of her actions. Case in point: committing Abbie and Jenny’s mom to an institution: “I was a young cop when I made that decision. Who knows what I think of it down the line? I love that fact that this show deals with regret and guilt. I don’t think she felt that.”

Showrunner Mark Goffman states that the overall theme season 2 is “about hope and redemption. When do we give up hope? Can we ever give hope up on a family member?” 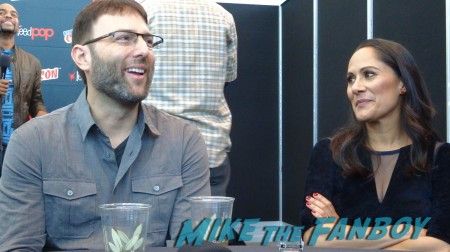 The family member that’s furthest from redemption is creepy Henry whose parents are still fighting for him. “The idea that [Katrina] keeps on wanting to believe in her son, I mean I weep every time I read that; it’s so beautiful. The hero fighting through those issues is so compelling,” says Sakina. 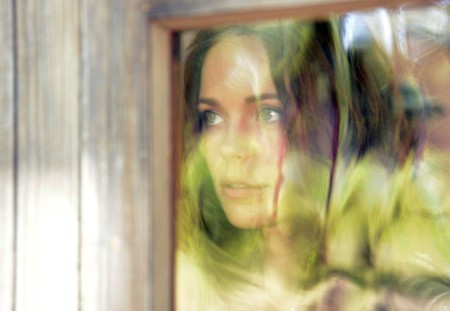 Henry’s possible redemption causes a lot of tension between his parents, as Mark explains: “Henry could potentially cause a lot of grief between the two of them. Family is pitted against duty. They’re fighting one of the most important wars they can be fighting and yet they’re also fighting against their own blood… There are going to be times that they disagree. There’s a lot of tension between the two of them, as strong as their bond is, this bond as witnesses and they have an incredibly important job to do, those bonds get tested. We’re going to test them in every way we can think of.”

Indeed, family reparations are a big part of the show this season. Raven describes Abbie and Jenny as “almost re-learning about each other…They are the only family that they have.”

Orlando Jones also talks about Captain Irving’s focus this season on “his relationship with his daughter and his wife, trying to put that relationship back together, getting his post in Sleepy Hollow. I’m enjoying that journey and it keeps turning.”

As dysfunctional as all the families are in Sleepy Hollow, we’ll continue to see strong, female characters. Raven, a new member of the writing staff is excited since writing “a scene with two strong women, not talking about men, but talking about their own lives or their own mission is a rare thing and kind of awesome.” 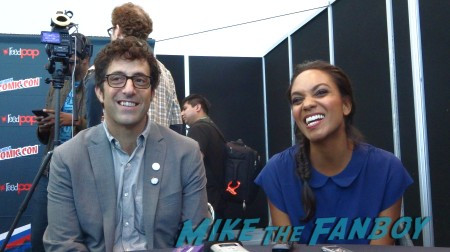 Mark agrees that the women “still have honest differences of opinions, and differences in world views, based on the experiences they have. To me that’s more exciting dramatically than petty fights. That’s what I like writing and watching.”

One of the trademarks of the show will continue to be Ichabod’s adjustment to life in modern times. “There’s so much to make fun of in our world. It’s [Ichabod’s] perspective on life that’s different,” Mark explains. “He has a 1 year old snapshot of what the modern world is. There’s 200 years to catch up on.” 200 years of civilization moving forward and the writers can’t wait for the fans to see Ichabod discover karaoke. Which, frankly, I can’t wait to see either! 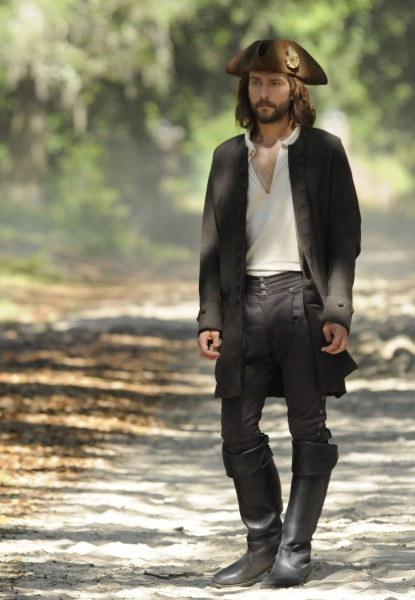 For a bit more on Ichabod’s thoughts on modern times, there’s a new book tie-in called The Secret Journal of Ichabod Crane that expands a bit on Ichabod’s, um, unique point of view. 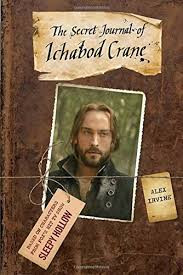 Mark also notes that Ichabod isn’t the only fish out of water: “One of the interesting things this year is that Katrina is in the modern world…the two of them trying to figure out their fashion.” He jokes, “I’d like to see the two of them go shopping together.”

Does that mean she gets away from the Headless Horseman to go to the mall?

Mark is quick to get evasive: “I didn’t say that. Maybe he takes her shopping!”

Yes, the team is very careful not to give away any spoilers! Mark does say “We don’t just want to keep her in the carriage the whole time, but there are a lot of ways we can play out in which she’s still captive.”

So what’s next for the residents of Sleepy Hollow?

Sakina teases: “Well I’m going to make out with Abbie Mills later on.” Did we mention the team is evasive on what’s in store?

Any chance of Captain Irving and Jenny Mills getting closer? Lyndie remains mum: “When Orlando and I first worked together, the reaction from the fans was quite surprising…We’re really great friends and I think you read that on the screen, which is great.”

We get an ominous comment from Mark about whether or not Sheriff Reyes will be pulled into the supernatural events of Sleepy Hollow: “Evil has a plan and they only let people in when they are ready to be let in. It’s a significant moment when that happens.”

Len Wiseman promises we’ll see more of Andy Brooks (John Cho): “We’ll see a whole story on that since I wrote it myself. We were working on the back story of this character and why he is so driven. We have a three page document on Abbie and Andy’s back story.” 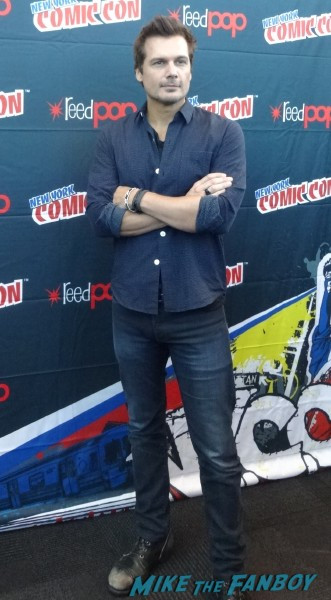 “Nothing in history happened that didn’t involve Sleepy Hollow,” states Len which pretty much outlines the parameters of where the story will go this season. The show will continue to feature famous moments in American history with a bit of a twist.

Do they anticipate any backlash from historians?
Orlando states: “Well, Ben Franklin’s pissed.” 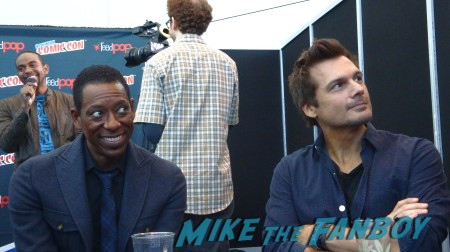 Sorry Ben! The good news is that this season is extended by 5 episodes (18 in total) and we won’t see any re-runs between here and the finale. (There will be a winter holiday break.)