Home / The Lovely Erica • TV Heartbeat / TV Heartbeat Interview! The stars and creatives on why Syfy’s Hunters is not just another SF/Horror show!

Syfy’s newest series may be filled with aliens of the scary, oozing kind, but Hunters isn’t just another science fiction/horror show. Writer Natalie Chaidez and stars Britne Oldford and Julian McMahon talk about working with gooey aliens and the show’s bigger comment on terrorism.

Hunters is the story of FBI Agent Flynn’s pursuit of the terrorists who have kidnapped his wife. As he digs deeper into the mystery, he joins forces with Allison Regan and the secret government group called the Exo-Terrorism Unit (ETU). The ETU’s mission is to fight the terrorists, called Hunters, who just happen to be extraterrestrials. 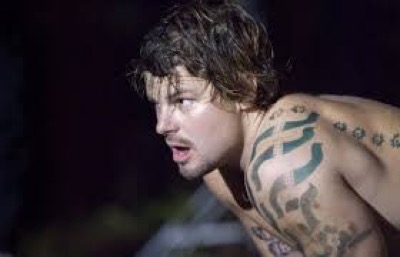 Inspired by the Alien Hunter books by Whitley Strieber, producer Natalie Chaidez started thinking about the aliens as “a smaller group, a powerless group, a hungry group which led me into this idea that they’re acting like terrorists.” 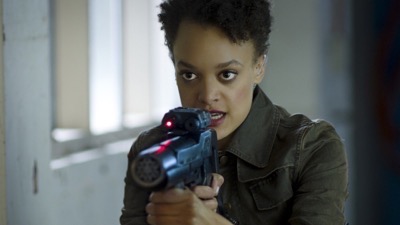 “Hunters had been in development for three years,” says Natalie, “and the allegory of terrorism has just become more relevant in the last couple of weeks. Terrorists are the monsters of our time. Science fiction has always been a way to explore relevant social issues in a way that is palatable and to deal with our fears. The show is really about that fear.” 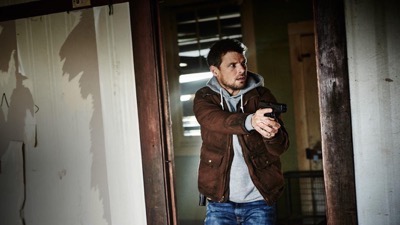 Julian McMahon, who plays a Hunter named McCarthy, agrees with Natalie: “This is a difficult time that we’re in and terrorism is the new monster. The launch of the show coincides with something that is horrific, so your concern immediately goes to people that have been affected by this and your heart goes out for them, and your prayers go to them. As a television show, this is an opportunity to be out to express our fears and to be able to do that through an alien world I think. As a piece, it’s interesting; as a statement, it also has its kind of its interesting qualities to it.” 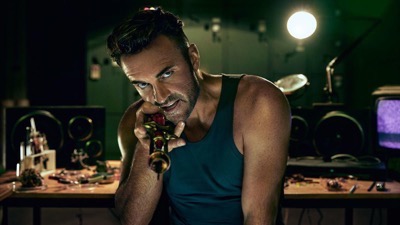 The aliens in Hunters are pretty extreme which also puts this science fiction show into horror territory. “I started looking at a lot more body horror stuff,” Natalie explains, “with Cronenberg and just some other gory stuff that influenced us creatively throughout the season.”

“[Co-executive producer] Gale Ann Hurd has a long tradition of working with practical effects, coming up in the Roger Corman camp,” she continues. “In early discussions, Gale and I talked about grounding this really firmly in practical effects and, not only creatively helping the show but, to give it a tactile and a visceral feel that sometimes is lost in the effects. And we hope we provided that.” 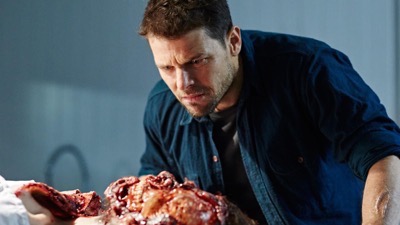 Translation: Do not eat dinner while watching this show. Seriously.

While the aliens and gore factor place this show in a classic science fiction/horror genre, the plot and focus are more like “thrillers of the ‘70s and conspiracy thrillers” according to Natalie. After all, Agent Flynn (Nathan Phillips) gets pulled into this unseen world of different groups covertly in conflict.

Among those in conflict is ETU member Regan. Actress Britne Oldford describes her as “strong and intuitive, but she’s still incredibly sensitive to her surroundings and the people around her. And I think that’s a very complicated role.” 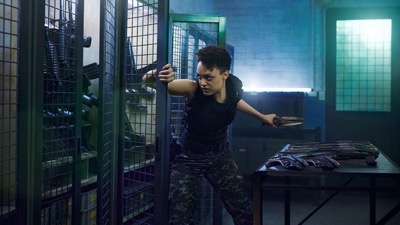 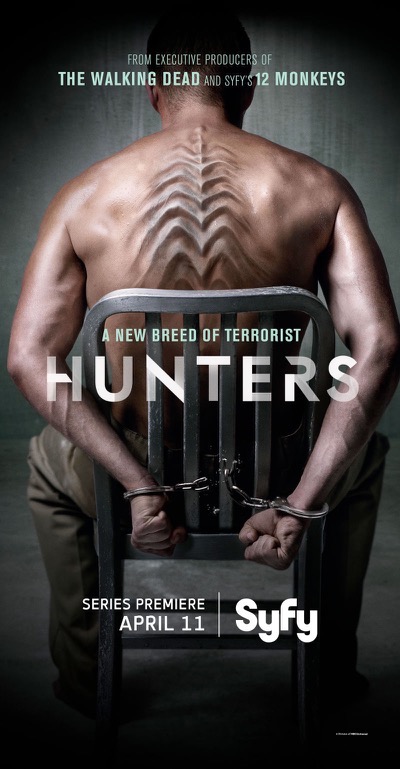 Hunters is an intense show and debuts on Syfy on Monday at 10 PM/9 PM Central after the season finale of The Magicians.