You have to love a show that appreciates its fans. I mean really, really appreciates the fans! Perhaps inspired by Tatiana Maslany’s “thank you” picture at the end of season 1 last year… 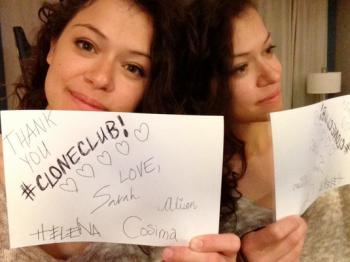 …almost EVERY department on the show gave their thanks to the fans this year! Check out their messages to the Clone Club!

#CloneClub #OrphanBlack Thanks for taking the Season 2 trip with us! Our brains hurt too, dudes! U R WHY WE DO IT! pic.twitter.com/igXBKcxPxI

Maria Doyle Kennedy – Mrs S. the woman you don’t want to piss off at the dinner table (but a lovely soul otherwise)

THANK YOU SO MUCH (If you're having us around for dinner…maybe just ration the cutlery) #CloneClub #OrphanBlack pic.twitter.com/hcJBciXeqc

Michiel Huisman – We knew we were going to see Kira’s father some day. He was worth the wait!

Evelyne Brouche – Delphine who places her trust in the wrong people… (Cough! Rachel!)

Hey #cloneclub. Here's a kiss for each and every one of you. Cause your all my buddy. pic.twitter.com/IMgKz8m28n

Thank u #OrphanBlack #CloneClub #clonesbians @OrphanBlack for such an awesome season 2! See u next year @BBCAMERICA pic.twitter.com/rC1cFVP1tP

Kevin Hanchard – Detective Art reflects back on this season

Thanks to the best fans in the world!! #CloneClub #OrphanBlack pic.twitter.com/qXnN2MplcK

@OrphanBlack Thank you #CloneClub for being so damn amazing. We love you all at #OrphanBlack. Hugs for everyone. pic.twitter.com/hKG7GX7JVp

Kathryn Alexandre – The other woman who plays all the clones! She plays the other clones opposite Tatiana before the magic steps in to blend all the Tatianas together.

Thank you #CloneClub for an amazing 2nd season of #OrphanBlack! I will eat some sugar covered jello in your honour:)! pic.twitter.com/jB2Q1UemrE

From Cynthia aka Mini-clone (Young Rachel & Charlotte) to #CloneClub. Big thanks for #OrphanBlack. "It was fun!" pic.twitter.com/ovwHLaKxO6

Stitched this up for ya, #CloneClub ;) THANK YOU for being SO incredible! Love you all! xo #OrphanBlack @BBCAMERICA pic.twitter.com/gLCSJ4qz5V

@OrphanBlack @BBCAMERICA So great to have been a part of this amazing show! Thank you #CloneClub & #OrphanBlack pic.twitter.com/n09d0KWvHi

Nick Rose – Colin from the morgue

Thank you #CloneClub from Colin and the morgue dog! Congrats @OrphanBlack on another great season! pic.twitter.com/piCCs6wlR6

Some of the day players, stand-in/stunts:

When Sarah became Beth in S1 of #OrphanBlack… you've been there from the start. Thanks, #CloneClub! | @OrphanBlack pic.twitter.com/rO1cPjD7DP

Thanks to all the fans of Orphan Black! Come back to the morgue! #CloneClub pic.twitter.com/2iVRPVBj8i

Thanks From @OrphanBlack to #Cloneclub #OrphanBlack. It was a blast. pic.twitter.com/nIbNRIr5LV

#CloneClub Thank you, thank you – for coming along with us on this crazy ride! You. Rock. #OrphanBlack #TheHive pic.twitter.com/mwjsDcTvjS

Cosima Herter – science consultant and the inspiration for Cosima

Some of the great directors (of course they took interesting pictures!):

#OrphanBlack #CloneClub Orphan Black – Up on Bust. Your support is appreciated. Brett pic.twitter.com/KbVoPKCcYW

Thank U so Much #CloneClub for making Season 2 #OrphanBlack such a success. @OrphanBlack @BBCAMERICA @TempleStreet pic.twitter.com/09s7HuFs18

Mackenzie Donaldson – assistant to the showrunners

Thank you #CloneClub for all your love and support towards @OrphanBlack this season! From your friends @icvfx! pic.twitter.com/qYfF6XQn9d

Trevor Yuile – The composer that creates those unique, eerie/scary sounds

John Nelles – Oi! The guy who makes sure everyone’s speaking in the right tongues

Mark Beaulieu – From Locations, a much bigger job this year since the show was much broader in scale this season

Thanks for a great season 2!! @OrphanBlack #CloneClub #OrphanBlack from the locations department. pic.twitter.com/OpiLYZDK5B

Members of the marketing team

Thank You! #CloneClub for enjoying @OrphanBlack Season 2 and my poster designs! 😉 pic.twitter.com/sf0FxM0WHF

And even the guys in catering! Super important to morale on set…

Sound off! But how did this season go?

This year, Orphan Black delved deeper into the rabbit hole and took the whole conspiracy/mystery in a different direction. The first part of the season was pretty chaotic with Dyad, the Prolethean ranch, Mrs. S’s underground network and other subplots. 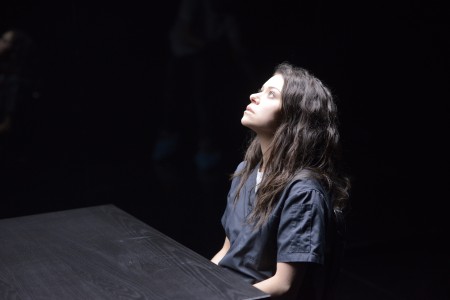 We start to get the payoff of the many storylines mid-season when they find Ethan Duncan and Alison goes to re-hab. Yes, there are some real comedic moments, but also some really tense and emotional ones as well. 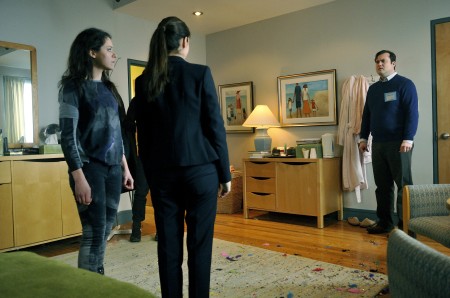 At that point, different threads start to come together with rather, um, unexpected results. (Donnie does what to Leekie?!) The rest of the season is a welcome, sprint towards the end with more focused storytelling ending with some truly big surprises and a big set up for next season. 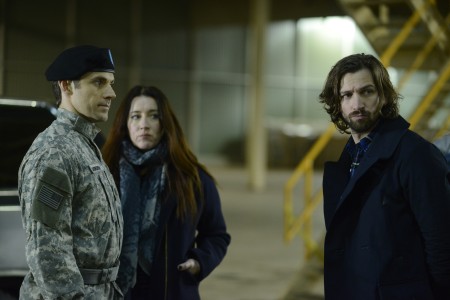 After last year’s out-of-nowhere debut, a second year for a high-concept show can be really tricky since the story needs to be have more layers without getting convoluted. Orphan Black has managed to stay true to the first season by building on seeds already sown so it generally feels true to the story. 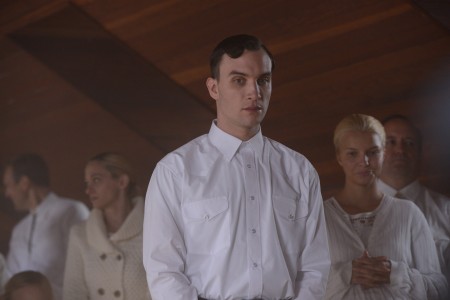 While the many storylines early in the season definitely kept things interesting, I missed the connection of seeing the clones together. That’s one of the reasons why the clone dance party was such a relief in the end. (Also, the geek in me was excited to see the infamous “Cosima dance” that Tatiana dances when she arrives on set each time as Cosima.) This extended video mixes the party with glimpses into the magic behind the scenes – it really makes you appreciate Tatiana Maslany, Jordan Gavaris and all the magicians behind the camera:

And speaking of Felix, I wish we had seen more of him this season since he’s a lot of the heart of the show and, somewhat strangely, Sarah’s conscious. Also, Jordan just lights up the screen so let’s make sure there’s more Felix next season! 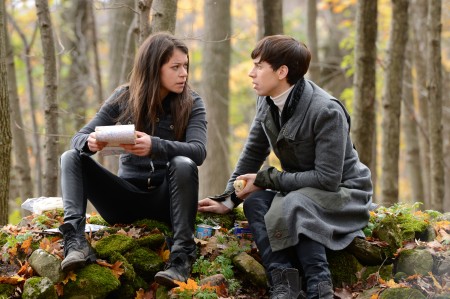 The cast continues to impress with Maria Doyle Kennedy’s Mrs S a careful balance of earth mother and fierce den mother. And mean chef. Keep her away from the cutlery! 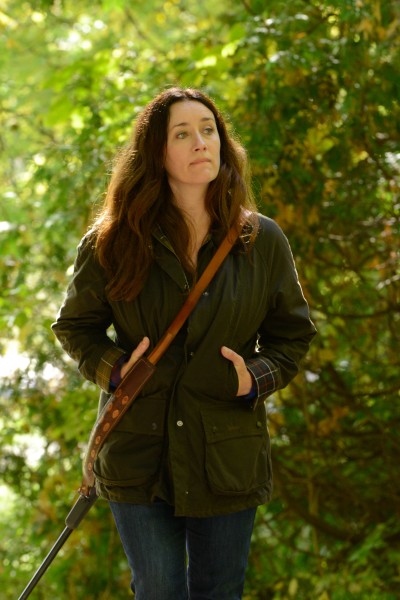 And, of course, no discussion on the cast for Orphan Black would be completely without praising Tatiana Maslany. She disappears into each character so completely that I often forget she’s Alison AND Sarah AND Helena AND Cosima AND Rachel. Each woman is completely separate and realized and nuanced. Since this is year 2, perhaps the Emmy voting category can feel it’s okay to recognize some of the most astounding work on TV. Lord knows, there’s no more deserving performance and given the caliber of the work on TV these days, that’s really saying something. 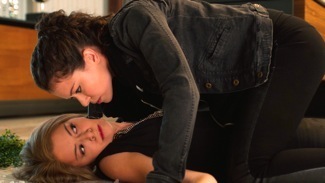 And what about season 3? Well, it hasn’t officially been announced since I think they are still negotiating. Rest assured, everyone wants to make more crazy science so there will be a third season! 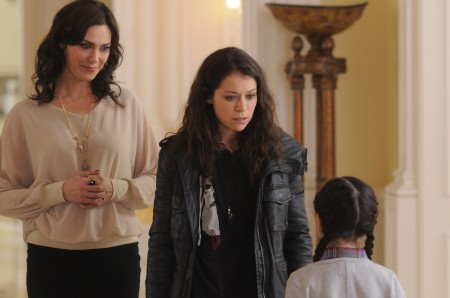 If the pattern holds, negotiations need to finish up pretty soon since the writers will need to begin work in late July to start production in September for an April debut.

It’s a long time until April, isn’t it? Sigh!