About 9 months ago, Syfy announced they were producing a series based on the film 12 Monkeys. Now, I’ve always liked that movie’s sharp story  so I’ve been following the progress of 12 Monkeys as series with a bit of trepidation. Why would you want to monkey (ha ha ha) with a great film? Some movies make great TV shows (Fargo, most recently) and others don’t. Where would this one fall?

I’m happy to say that the series is a different animal, but definitely worth watching. Yeah! 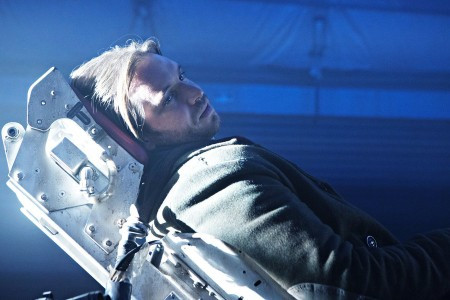 12 Monkeys (the series) begins in the year 2043 after a plague has nearly wiped out the human race. A group of scientists have concluded that the best way to stop this super virus it to prevent it from ever happening. They have a time travel device and hope to send someone temporarily back in time to stop the nasty bug from killing 7 billion people.

Sure. That’s all! Stop a plaque. Piece of cake. Do it everyday.

But in the 27 years since the plague nearly killed everyone, a lot of information on the early days of its spread are gone. They have one garbled recording from virologist Cassandra Railly (Amanda Schull) that places the blame on a mysterious “Leland Frost” and also mentions the name “Cole.” Since he’s mentioned by name, the scientists send Cole (Aaron Stanford) back in time to find Cassie and find out what she knows. 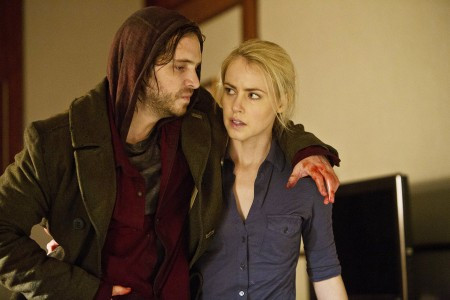 If you’re a fan of the movie, you’ll notice some twists on the story already (Cassandra’s name and occupation, the content of the garbled message). And that’s because there’s a twist on the series. There has to be, really, to be a TV show and not a 2 hour movie. Whereas the film focused on understanding madness (Is Cole insane? Is this an elaborate delusion or is it really happening?), the series is not.

The opening sequence cleverly establishes Cole as a time traveler which lets the story focus on the bigger mystery of the strange virus. How do you stop a plaque? How do you stop something that may not have started yet? How much can the future impact the past? Smart and twisty, this is an interesting maze and this is the main focus for the series. 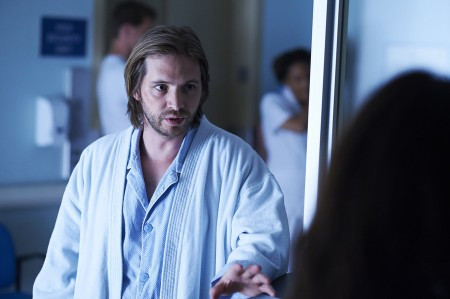 The plaque mystery isn’t the only conflict though. Cole has difficulties with the inaccuracies of time travel and he’s often in conflict with Jones (Barbara Sukowa), the leader of the scientists. A man of few words, Cole also has a dark past that he’s trying to atone for. Meanwhile, poor Cassie has lost her credibility since she’s been babbling about time travel.  But she believes Cole and she commits to helping him to stop the virus. 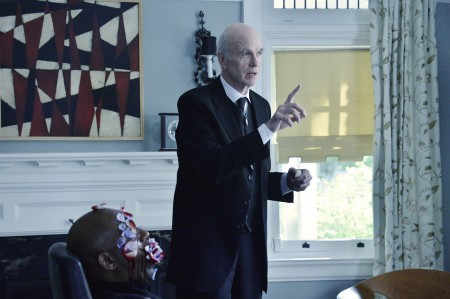 Another change is the character of Goines whom Cole meets in a mental institution. Instead of the movie’s animal activist Jeffrey Goines (Brad Pitt with a lazy eye), we have Jennifer Goines (Emily Hampshire) who is mysteriously and obsessively sketching monkeys. (And occasionally wears yellow sweaters with black stripes down the sleeves in a nice tip of the hat to the film…). She’s definitely a wild card and her past may unlock some clues as to the virus’ origins.

The other major difference is that the series is grounded more in reality. We don’t have all the crazy Terry Gilliam angles and Bruce Willis butt shots that amplified the theme of madness that the film was exploring. Instead, this is much more realistic world. (So realistic that their camera crews ran across real Ebola quarantine zones while filming the show – but that’s a story for another day!)

If you loved 12 Monkeys the movie for the Terry Gilliam-ness of the film, this will definitely be a change.

If you loved 12 Monkeys the movie for the mystery/time travel element, you’re going to love this.

If you have never seen 12 Monkeys the movie, this is an intriguing puzzle and worth watching! 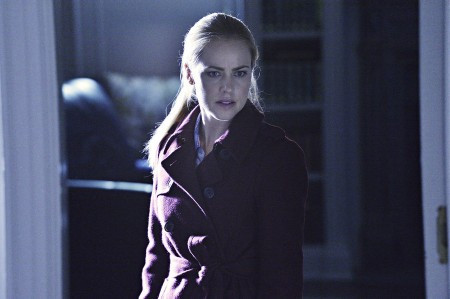 Check out 12 Monkeys which starts on Syfy on Friday, January 16th!

I’ll be back with some behind-the-scenes insights from a screening and Q&A with creators and producers. They chat about the changes they’ve made, keeping their time travel straight and where the show is headed!