Home / Paleyfest • Q and A • The Lovely Erica • TV Heartbeat / TV Heartbeat Special Edition! The Creators of 12 Monkeys Talk About The Future of The New Syfy Series!

The new series, 12 Monkeys took over Syfy last weekend! A twist on the movie of the same name, 12 Monkeys follows Cole and Cassie as they try to stop a super virus from wiping out 7 billion people.

Back in October, the Paley Center in New York hosted a screening for 12 Monkeys. Showrunner Natalie Chaidez, executive producers Terry Matalas and Travis Flickett, and cast member Emily Hampshire (Jennifer Goines) all stopped by to chat about how the show got started, how they wrap their heads around the time jumping and filming in an Ebola world. 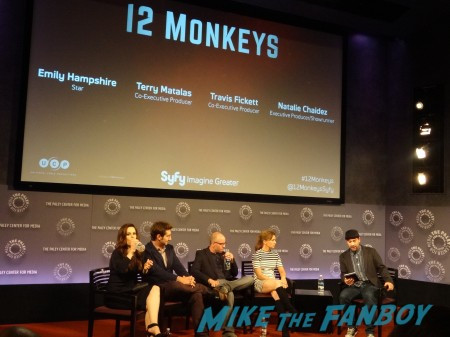 “When they first said ‘What do you think about making 12 Monkeys into a show?’ We said ‘Good God no! Don’t do that. It’s a perfect movie,’” says Terry, echoing many people’s first reaction to hearing about this project. “Then we sat down and really talked about it. People always think of Terry Gilliam when they think of that movie, but I always think about that script that [David and Janet] Peoples wrote. It’s so brilliant. And if you read, it reads a lot more like a thriller.”

Terry describes the show as “a giant puzzle and the pieces are completely out of order…We meet people who haven’t met each other and we’re telling a lot of stories out of order.” 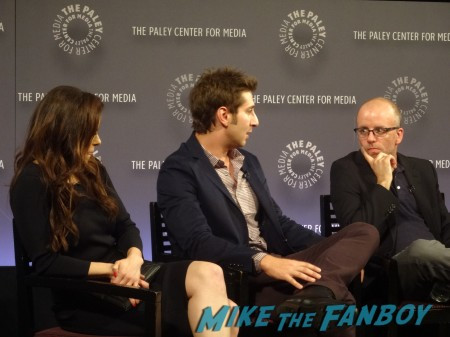 All the various threads make this show very reliant on smart writers to manage all the different plot intricacies. To keep their story straight, Natalie says “we have a massive timeline that’s regularly updated.”

Travis thinks of the show as “two different shows at once. There’s the past story line (the present for us) and Kirk Acevado and Barbara Sukowa as the blonde German scientist. She’s like time travel’s Adama. She’s like the Captain Picard of time travel.”

Terry hints at the episodes to come: “We do episodes that take place only in that future. We really dig into Cole’s back story here and see what that future is like. Cole and Ramsey [Kirk Acevedo] were both scavengers and they grew up in the apocalypse. They were kids when the world fell…..We spend a lot of time in that world which sets up Cole’s arc which is he’s not just about saving 7 billion people as much as he is about saving himself. By re-setting the timeline and re-setting the apocalypse, he gets to erase the things that he’s done.” 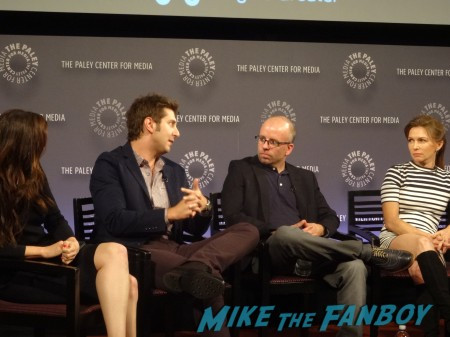 Of course, things aren’t that simple. Terry also mentions “It’s not a very good time machine…there’s a lot of mishaps. It’ll be enjoyable and a little frightening.”

But even with the complex plot, Natalie emphasizes that they are doing a “show that’s emotional and also service the brain-busting time travel stuff. It’s easy to fall into ‘it’s such a cool time travel story,’ but it doesn’t connect…we ground it in something character based.”

The balance of character and plot was also key to attracting Emily Hampshire (Jennifer Goins), a science fiction newbie: “As well as doing the time travel thing, there’s heart in this movie and relationships.” 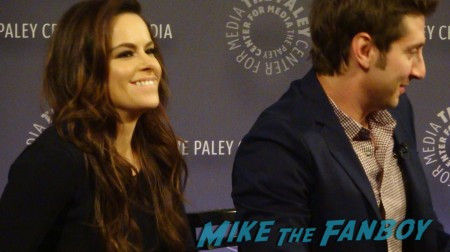 “The show really becomes an ensemble by mid-season with many, many different points of view,” Travis explains. “Just because you can change time, doesn’t mean you should. We really get into the consequences of that and explore that.”

“We’re taking on big ideas of the future and the past and who’s right and whose future it is,” sums up Natalie. 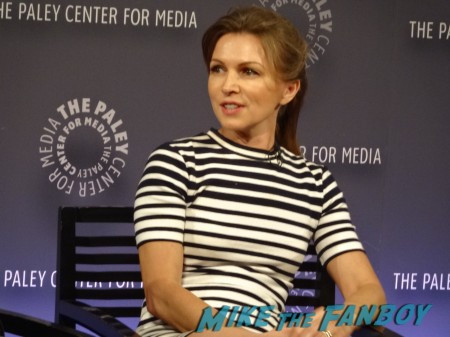 Ultimately, according to Terry, they are weaving “questions and mysteries and then there are these payoffs that are so satisfying…a serialized puzzle.” He also warns: “There is a point in the show when you’re not sure who to root for anymore.”

Stylistically, things are different in the series than in the movie. Travis describes the show as “a little less gooey than Gilliam’s movie. There was a lot of drool and slime. This is hard-scrabbled, cobbled together. It’s not as functional as they would like and there’s not a lot of replacement parts.” 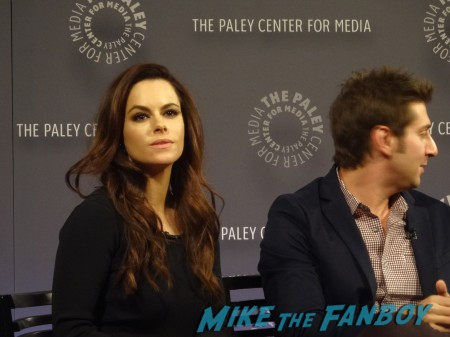 While they are grounding this show more in reality, they were a little too unprepared for how real their story might get. Terry told us that “as we speak, we’re shooting on location in Macedonia. It’s a period of time in this series where there’s an outbreak and just yesterday, Ebola struck there and shut down our hotel. Our crew is right there and we’re putting up quarantine signs for the show. It’s actually terrifying.”

“This shit scares the hell out of us,” chimes in Travis.

12 Monkeys airs on Fridays on Syfy. 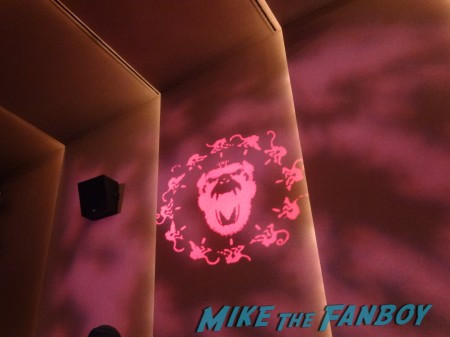